“And They Say That A HEEERO Could Save Us…”

Making a good Spiderman game is apparently a lot harder than it sounds, with the last few attempts being pretty mediocre by most accounts. And as much as I loved the games based on the first two movies, I’m willing to concede that they probably haven’t aged as well as I’m imagining. As much as I love Insomniac Games, there’s almost nothing in their resume that indicates they’d be much good at making open-world superhero games. So kudos to Insomniac for not only making a great game, but the best open-world game I’ve played since Horizon: Zero Dawn. This is the most like Spiderman that any Spiderman property has felt like in a long time, and it’s one of the best games on the PS4. 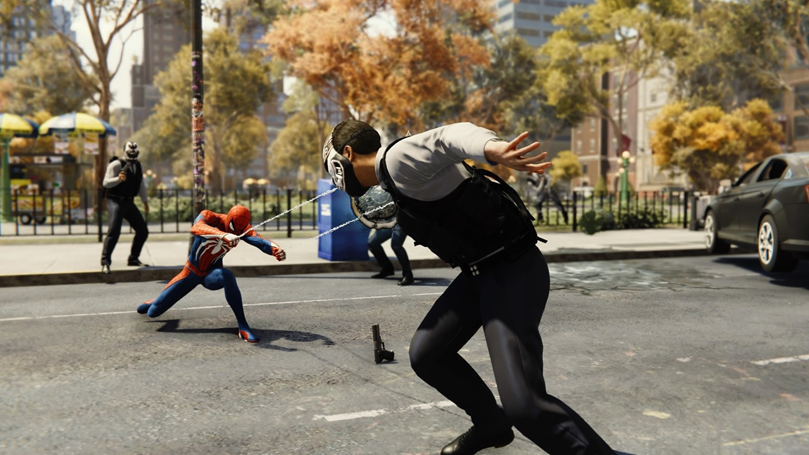 I won’t spoil the details of the story like the inconsiderate mistake of creation at my local game shop who was spouting off about the details of the ending a full day after release (so thanks for that, ya’ douchebag!), but I can say that Spider-Man avoids the pitfalls of many Spiderman stories told in the last decade or so, mostly by having us come into the story well after the events that turned Peter Parker into Spiderman. The classic origin story, including the entire Uncle Benn arc, along with clashes with several major Spiderman villains, is established to have already taken place some time ago. The Peter Parker of this game has been super-heroing for several years, learned some lessons and has even developed a more mature relationship with Mary Jane, who may by the way be the best incarnation of Mary Jane ever, with much more agency and a more fleshed out personality than the character is usually afforded, even playing a crucial role in the story at several points.
The in medias res approach also serves the gameplay, allowing us to jump straight into the action immediately. Rather than making us run around as a pre-spiderbite Peter Parker for half an hour or more, playing out a story we already know the ending to, Spider-Man opts instead to open with an explosive battle with a classic Spiderman villain before settling down for a bit and letting us explore Spider-Man’s version of Manhattan as imagined by Insomniac.

Nearly every element of Spiderman’s universe has been given it’s own modern spin by Insomniac, seemingly by taking several individual characters and story details and asking what might come next for each of them. I’ll let you discover the coolest ones for yourself, but my personal favorite is J. Jonah Jameson, who we learn early on has retired from the Daily Bugle and whose radio show routinely chimes in while you’re exploring the world to berate Spiderman, fill us in on the public’s opinion of current goings-on, berate Spiderman, add some extra details to certain story points and of course, berate Spiderman.
As much as anything else, it’s that sense of history imbued into the game and modern updating of classic characters that makes the game feel like Insomniac’s Spiderman, rather than just another Spiderman game, and as a result, might just have the best story of any Spiderman property since the first two Sam Rami movies. 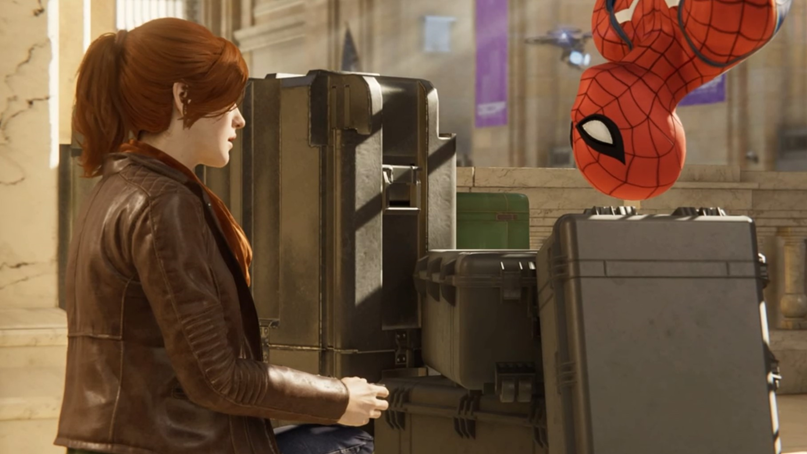 As great as the story and gameplay are (and they are), a game is only as good as that aspect of it that you spend the most time with, and in the case of Spider-Man, that element is the game’s recreation of Manhattan and more specifically, your unique but effective means of traversal known as being freakin’ Spiderman.

A lot of open-world games could have very easily been linear, level-by-level games and include an open world to make the game deeper, more immersive or at the very least longer, filling their worlds with a few good side missions amidst a sea of busywork. While Spider-Man fits that description perhaps a little better than I’d like, my frustration is abated somewhat by just how much fun it is getting from place to place. Most open-world games will have you drive cars or employ superhuman speed or jumping ability to get around, and even if those things start out fun, many of them become mindless and routine after a while. Web-slinging on the other hand is a skill, one you’ll use almost as much in missions as you will in the game’s world, and one you’ll never stop actively developing throughout the game.
The controls beyond the basic “hold R2 to swing from the nearest structure” may seem overly complicated at first, but you’ll improve each in turn and it won’t be too long before you’re performing most of them with relative ease and at some point, you’ll pull of a complex series of split-second maneuvers that will have you sitting still immediately afterwards thinking “whuug-did I just do that?”
You might think that once you’re on the ground it might be a pain to get going again. Luckily, Spiderman can start swinging with basically any amount of air, even from a jump or alternatively web-zipping to a nearby lamp post to get him started. And if all else fails, Spiderman takes a page out of Prototype’s playbook and just lets you sprint up the sides of buildings.

Every once in a while a game will come along with an open world that I’ll climb to a high point and survey, thinking with awe “I can literally go to the farthest point I can see, this is awesome!”. And that’s before the Danny Elfman-inspired music kicks in when you start swinging and makes you feel awesome for just existing in the world.

While comparisons of Spider-Man’s combat to that of the Batman Arkham games are inevitable, I don’t think it’s a valid comparison, and not just because Arkham Asylum is a nine year old game. We don’t compare every first-person shooter to Doom just because you have a gun or every hack and slash game to Dark Souls just because it’s, well…good.
Spider-Man’s combat stands on it’s own as an example of the best that a beat ’em up combat system can be. Like the original God of War games, combat is easy to understand and get into and can be pretty much button-mashed through to a point, but as difficulty ramps up you’ll need to get familiar with the intricacies of Spiderman’s moveset; counterattacking, disarming enemies and making full use of your gadgets.

Of course, the biggest difference Spider-Man’s combat and that of the Arkham games is that the thugs Spiderman beats up are all visibly alive and relatively unbroken in the aftermath. Even the guys you throw off buildings in defiance to Spiderman’s no killing policy actually get webbed to the closest wall by some unnamed gadget. And while I admire your adherence to non lethal takedowns, Insomniac, it just means that players including myself are just going to look for graphical glitches that make defeated enemies look super-dead and otherwise try extra hard to defeat your efforts. 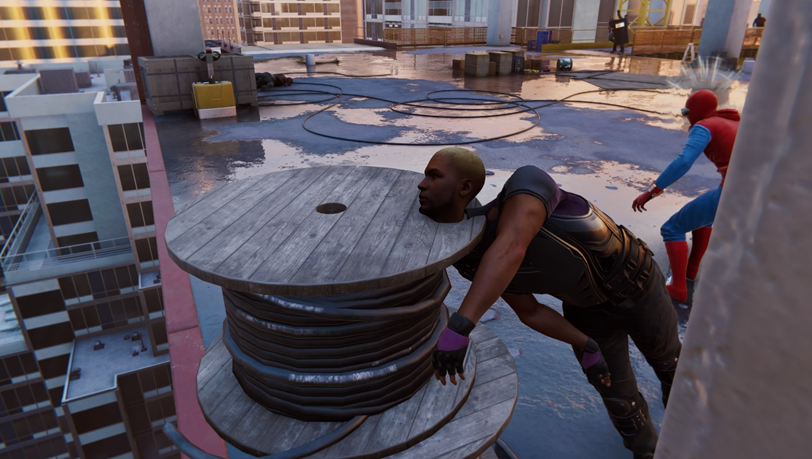 Like Horizon: Zero Dawn or the inFamous games, Spider-Man is a rare example of a game whose world you can pour dozens of hours into, but one that actually feels possible to complete in its entirety.

Spider-Man’s open world does such a good job of providing you with an immersive superhero playground and the means to explore it that it can sometimes be difficult to pull yourself away from it to take part in any of the game’s structured challenges. The best of these challenges can appear anywhere within a given section of the city, allowing them to pop up organically while you’re on your way somewhere and really making you feel like a superhero on patrol.
It was the other, static challenges that I had a bit more of a problem with, namely the base missions that have you take on enemies in an enclosed area. If there were only a single larger group of enemies, or if it were possible to stealthily go through the entirety of a base (or both), then maybe I wouldn’t feel quite as down on the base missions. As it stands, they can’t help but feel like a bit of a slog after several waves. None of the challenges are strictly bad per se, they’re just things we’ve seen before in other open-world games and compared to nearly everything else in Spider-Man, they can’t help but feel less exciting.

Each of these activities, from locating collectable backpacks to stopping crimes to pigeon wrangling (yep, that’s a thing you can do) grant you unique rewards, usually in the form of tokens used to upgrade your gear and abilities. It’s great that you’re given tokens to go towards something you want on the skill tree or costume shop rather than specific rewards, but it’s still frustrating when rewards you want are tied to activities you don’t like. The base tokens in particular, used to purchase new suits aren’t necessarily difficult to get (though a few are). Rather, it’s hard to take a break from the fun of web-slinging through the city to the tedium of fighting half a dozen waves of guys in a locked room. But completing bases is the only way to acquire base tokens, which you’ll need to unlock Spider-Man’s plethora of alternate costumes. Pulled from the exhaustive history of Spiderman comics, some suits are fairly recognizable, like Ben Reilly’s Scarlet Spider suit or Spiderman Noir (Basically, “what if Batman decided to be Spiderman instead?”), but some are so obscure I can only guess at their origins. I can’t quite believe I’m actually asking this, but does Spiderman become a ghost or something at some point in the comics?
I’m asking for a friend. 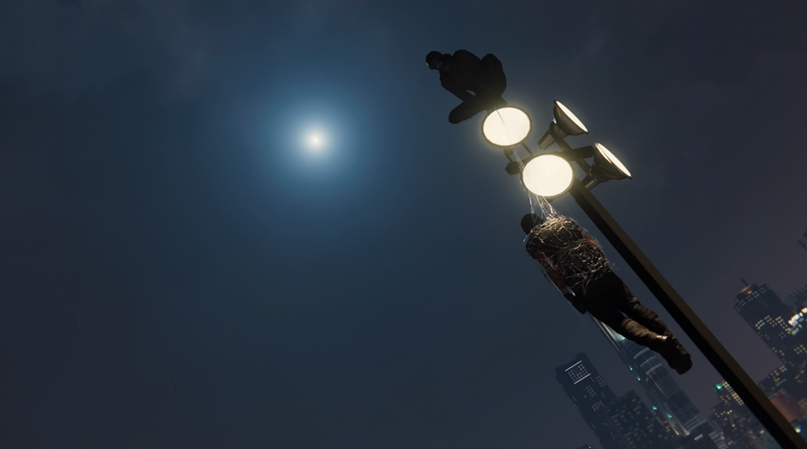 Though I stand by my one minor nitpick, that the Bioshock-style hacking minigame you’re occasionally made to do always seems to pull the emergency brake on whatever fun you were previously having, I admit to feeling the argument less strongly once the minigame was used to lend a degree of interactivity to a surprisingly effective story moment.
Do I wish some systems were a little deeper, or that there were more suits to unlock or more villains to fight or just, more? Sure. But in this case at least, that’s not a criticism, it just means that I loved the game so much that I blasted through it as fast as I could. Incidentally, when Activision or EA or whoever start in on how games are too expensive not to include sleazy, predatory business practices like loot boxes and ultimate editions of games that don’t actually include the game (I see you there, Ubisoft), Spider-Man is another game to point to as an example of how to make games properly while respecting the people who keep your lights on.

Between the awesome game world, the smooth, satisfying combat, a story that feels like an exciting sequel to a more boring, predictable game that we thankfully never got, Spider-Man does for its titular character what the Arkham games did for Batman, crafting an experience whose design, gameplay and general tone all coalesce to really make you feel like the hero of the title, rather than someone who just wanders the streets starting fights dressed as their superhero of choice; and unlike the latter, playing Spider-Man is unlikely to get you kicked out of Comic-Con.