“Kicked Up A Notch”

Overcooked 2 is more Overcooked, that’s it. It does very little to shake up the formula that made the first game a hit and other than perhaps refining the controls a little, doesn’t introduce any new game mechanics. In all honesty, I probably would have let Overcooked 2 pass me by entirely if I didn’t own a Switch. One of the reasons I bought a Switch in the first place was as a portable local multiplayer machine, and Overcooked 2 seemed to be a perfect choice for the console. That turned out to be very specifically correct, in an almost Faustian kind of way. Regardless, Overcooked 2 is a fantastic multiplayer game that can be enjoyed by gamers and non-gamers alike, the definition of a great party game. 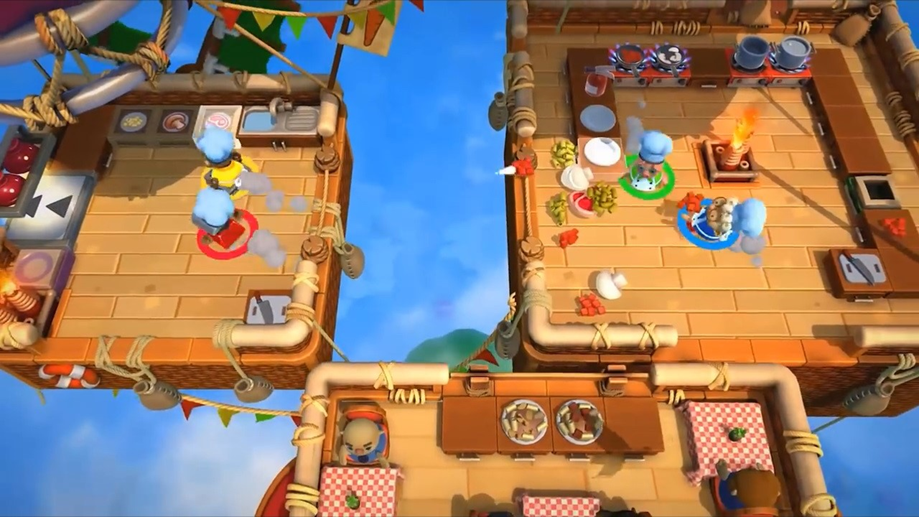 As in the first game, the story of Overcooked 2 is as much of a joke as it is a framing device. Where the first Overcooked had you working towards lulling Food C’Thulu back into its slumber, Overcooked 2 instead has you fighting off a zombie apocalypse, an incredibly easy going zombie apocalypse that will wait patiently for you to travel the world and improve your chef skills to the point that you’re able to face it head on.
Don’t let the cartoony graphics and jovial atmosphere fool you into thinking that Overcooked 2 is some kind of child-friendly party game in the vein of Mario Party or Super Smash Bros. Beneath it’s lighthearted exterior, Overcooked 2 is hiding a surprisingly sharp set of teeth. Levels start off easy, having you alternately combine lettuce and tomatoes on a plate to create the world’s most boring salad, or prepare sashimi, AKA chopped up fish on a plate. Gradually though, you’ll move up to more complex dishes with variable ingredients like pasta and sushi with different preparation times for each ingredient, leaving you with small openings to run around and knock out smaller tasks like chopping up new ingredients and dealing with my eternal nemesis, dirty dishes.

But if preparing food of various types was the only string to Overcooked 2’s bow, it would still find itself in “half decent iPhone game” territory. Every level in Overcooked 2 also has you dealing with one or more unique level hazards as you try to prepare various dishes on crowded promenades, aboard intermittently touching airships and across speeding trucks. It could be my imagination, but it seemed to me that Overcooked 2 ups the number of curveballs thrown at you mid-level, such as an early level where, while preparing burgers in a hot air balloon, a storm sends your craft careening into the sushi restaurant of an earlier level, drastically changing the layout of your kitchen and adding new orders more or less out of the blue.

A simple set of controls often allow for the greatest versatility, and it doesn’t get much simpler than move, interact and grab/drop/throw. But like it’s predecessor, Overcooked 2 isn’t about figuring out what to do, but rather determining the best and most efficient way to do it. I ended up going through most of my first playthrough with my sister, who isn’t a huge gamer, though you may know her as that one Mercy player in Overwatch who actually knows what she’s doing.
We quickly settled into a routine of calling out which tasks we were doing and setting up an assembly line, adapting our strategies on the fly as I realized I have a cutting board on my side of the kitchen as well so guess I’ll make the salad while you do the burrito meat. Oh I need to cut it up first, don’t I? Ok, here you g-oh crap, that went right into the garbage, sorry. Aaannd now my rice is burning. Alright can we just try this level again?

Gameplay is loose enough to allow for moments of comedy to pop up organically, and by comedy I do of course mean failure. Easily the funniest moment for me was early on, when my sister’s half of the kitchen caught fire and my instructions to “Use the fire extinguisher!” gave way to game-pausingly crippling laughter when she dropped entire thing into the spreading flames. 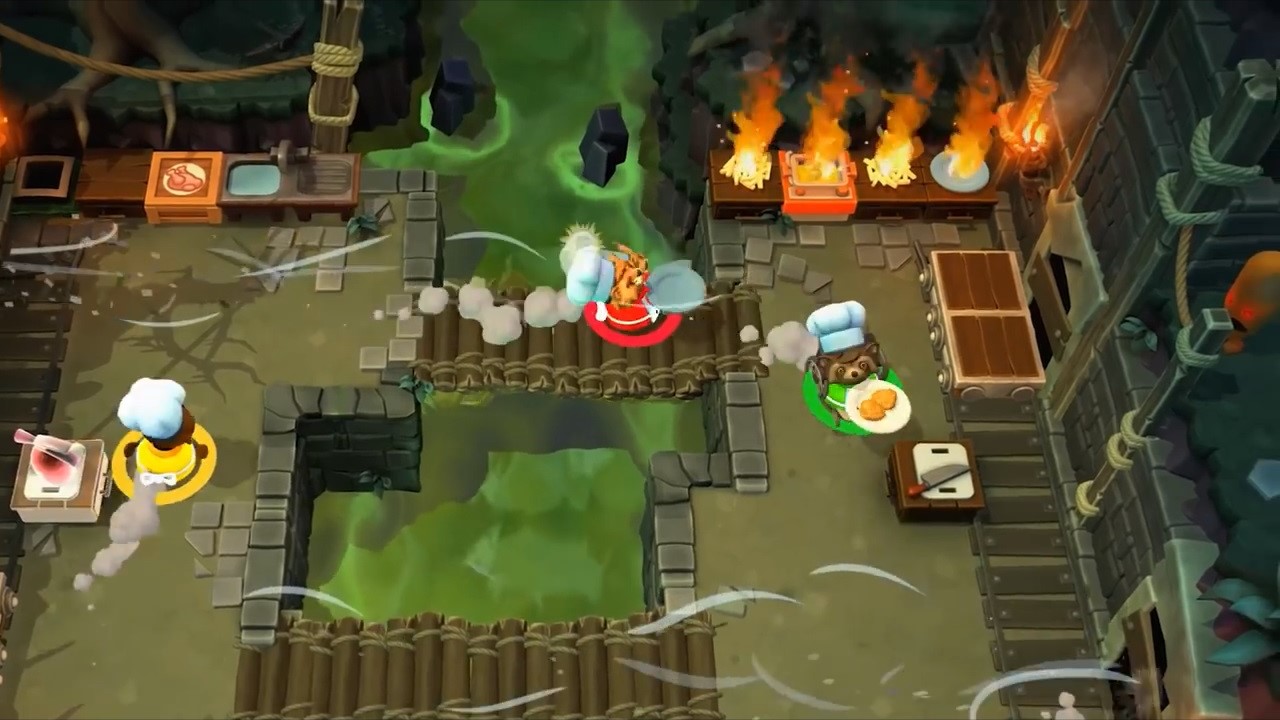 I’m almost inclined to say that Overcooked 2 is nearly flawless. If you can assemble three like-minded friends around your living room, Overcooked 2 is guaranteed to provide several memorable afternoons. I only really have a few little problems with Overcooked 2, and one large problem with the Switch version specifically.
First, it might be Overcooked 2’s biggest failing that no matter how good you are at it, you will never feel like you’re doing well at it in the moment. A friend and I went through half the game earning nearly double the score required to three-star every level, but between the endless orders stacking up, the coordination required to assemble multiple dishes at once and whatever crazy level hazards the game was throwing at us, we always felt like incompetent morons who didn’t know our Al dentes from our Don Corleones.

The controls can also be incredibly fiddly at times. Its great that you can throw ingredients across a room into a pots, frying pans, or even directly into other players hands, but it’s possible for a thrown item to get stuck somewhere it isn’t supposed to be and cause major problems, such as in an early level where a thrown ingredient got lodged in a pile of incoming clean plates, preventing me from interacting with either item.

It would also have been great if there had been a way to switch what a character was holding with an object in front of them rather than only combining them. I didn’t go through a single level with out running into several instances where I desperately wanted to grab an object and put whatever I was carrying down in it’s place rather than having to run around to find more empty counter space. Granted, the Switch’s controller doesn’t have too many buttons in it’s SNES mode, but you know what it could have replaced? How about the stupid bloody emote button that most people will only ever use by accident? Emotes are cute, but they’re a terrible way to actually convey information in most games, and Overcooked 2 is absolutely most games in this regard. But you know what’s a great way to communicate with other people? A little thing I like to call the human voice. If you decide to play Overcooked 2 on the PC, PS4 or Xbox One, this isn’t something you even have to think about, but spare a thought for the unfortunate creature that is the Switch owner. Going off of Nintendo’s approach to online play with each of it’s systems up to and including the Switch, one must infer that in the eyes of Nintendo, nearly every Switch owner is a convicted sex offender that must be sequestered in a lead-lined box at all times, lest they be able to interact with the two or three innocent children who purchased a Switch by mistake.

Not that voice chat is completely impossible on the Sweaty Wretched Ignominious Terrorist Containment Handheld, but Nintendo seems to have bent over backwards to make it as difficult as humanly possible by making you and everyone you know with a Switch download an iPhone app instead of featuring any kind of onboard chat system. And once you do that, you’ll notice that, since this app only sets up glorified Skype calls, you won’t be able to hear the game you’re playing without turning up your TV and blasting everyone with your game’s audio.

What’s that? You want to be able to hear the game’s audio too? Steady on there Augustus Gloop, save some audible sound for the rest of us! But fine, if you really must listen your friends voices and be able to hear what you’re doing in the game (like some kind of loser), Nintendo will happily sell you a peripheral that, through some unholy alchemy, combines the game’s audio and your friends voices into some terrible aural shoggoth.

As for the online multiplayer itself, I’m afraid I never got the chance to try it out on the Switch before Nintendo’s online “services” went up, and there’s no way in hell that I’m shelling out for Nintendo Online when firstly, I’d pretty much never use it as Nintendo has maybe two decent online-capable games at a time, a new record for them as of the Switch. Second, paying any amount of money for such an insultingly laid out service would make me feel like a gigantic rube. I’ve mentioned it before, but it bears repeating to say that, hilariously, I’m as sure as I can be that Nintendo would have gotten less backlash if it had offered fewer features in it’s online service, as the small pool of underwhelming games included in the deal only serve to highlight exactly how much nothing you’re really getting for your money.

So how is Overcooked 2’s online multiplayer? It’s probably fine. After two solid games, I trust the folks at Ghost Town Games to be able to throw together a functional matchmaking system and keep the game running smoothly online. On systems made by companies with an understanding of the internet that goes beyond the 90’s, I’m sure that voice chat functionality makes online play as smooth as it possibly can. Personally though, I’ll always prefer to play games like this in the same room as my teammates, and I can’t be the only person avoiding paying for Nintendo Online, whether or not they feel as burned as I do over Nintendo’s paltry offerings. 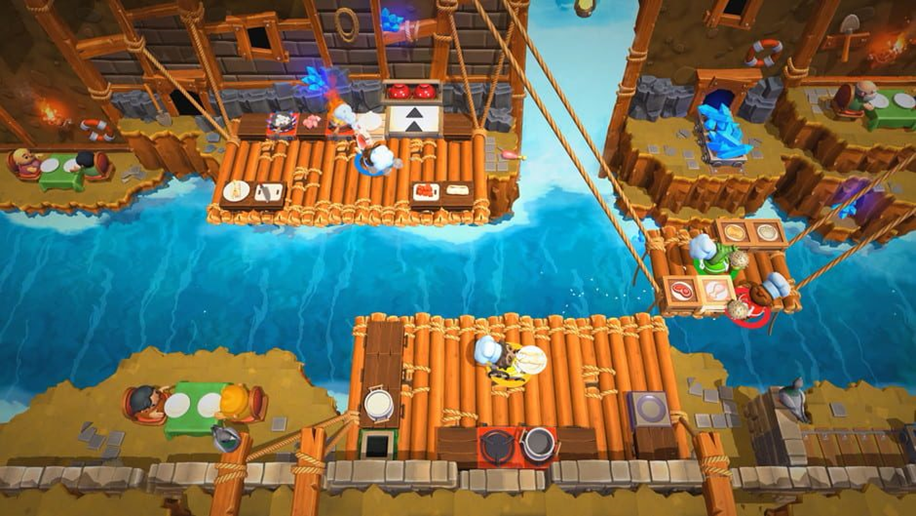 I initially picked up Overcooked 2 on the Switch because I assumed that the Switch’s portability and it’s inclination towards local multiplayer would make it the ideal platform for the game, and for the record that may in fact be the case…for the exactly two people that the Switch’s joycons can support out of the box. Unfortunately, Overcooked 2 on the Switch suffers from the much more tangible downside that it’s online multiplayer is hobbled by a lack of a reasonably-easy-to-use voice chat and, even more damming, much of a reason to pay for Nintendo’s online service at all.

But problems with the Switch aside, Overcooked 2 is probably your next favorite party game. The relentlessly lighthearted atmosphere, coupled with the simplicity of it’s controls and gameplay means that if you can persuade your non-gaming friends to try it out, they’re likely to have just as good of a time with it as you will with them.

8.5/10
Time To Complete: 8 Hours
Challenge: Moderate
Best Advice: Assign Everyone A Specific Task Of Tasks. And If You’re Playing Online On The Switch, Use Discord
Also Try: Spelunky, Helldivers, Rock of Ages 2: Bigger and Boulder