As mine was a Super Nintendo household back in the mid-90’s, I never played a lot of classic PC games like Myst, Descent, Fallout or even Starcraft until years later. Gaming news was largely a word of mouth thing back then and in my elementary school at least, the words were “Playstation” and “Ugh, you have a Nintendo?”.
I’ve put a lot of effort since then into hunting down and playing a lot of the well-regarded games I missed the first time around, but with the release of Overload, I feel I can safely take Descent off of my pile of shame since according to my old-school PC gaming friends, that’s basically what it is. Indeed, Overload does feel like a game developed in the 90’s, lost and rediscovered at the back of a dusty warehouse, and does such a good job of evoking the spirit of those old-school shooters that it feels wrong to play it without a slap bracelet on your wrist. 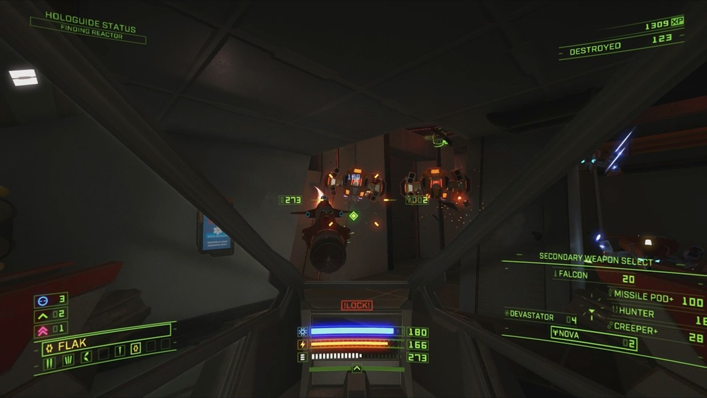 If you’ve never played a space combat game before, then the first thing you’ll need to learn to succeed in Overload you are in space. There is no up. There is no down. Like it’s predecessor, the levels in Overload sprawl out in every direction and if you’re constantly preoccupied with which way your ship is oriented while you’re exploring (let alone during combat), then you might want to keep a bucket handy while playing to catch the drops of your melting brain. Sadly, as someone who never played Descent back in the day, the best advice I can give to any newcomers to the genre like myself is “Just try not to think about it.”.

Despite all that craziness, anyone who played a shooter between the mid 90’s and early 2000’s should find the gameplay of Overload pretty familiar. My personal point of reference is the original Quake on the N64, but anyone who played Doom, Hexen, Serious Sam, etc. should quickly recognize that Overload is a straightforward, meat and potatoes shooter with a capital SHOOT. Your character might as well be a camera with an assortment of guns strapped to it and it is your sacred duty to fly through each level and blow up any living thing with the poor judgement to not be you.
Combat starts off easy but ramps up nicely as you progress, and sooner or later you’ll need to call upon those old-school shooter reflexes, circle-strafing around enemies (or perhaps sphere-strafing in this case) and blasting them to bits before scavenging through the neutralized areas for health and ammo.

Though Overload’s levels are more open-ended than many of those aforementioned shooters of yore, their design philosophy is pretty much identical. There’s a linear critical path to follow through each level, and the game helpfully provides a drone you can activate to guide you through the game’s labyrinthine levels, but if all you do is follow the drone from place to place, you’ll be missing a ton of content. Each level is loaded with secrets hidden away in various nooks and crannies, from scientists to rescue, ammo for your secondary weapons of course, not to mention powerups and upgrade points to improve your ship and arsenal.

Starting with only basic blasters, you’ll come across a new primary weapon nearly every level. Most primary weapons draw from a single energy source, refills for which are one of the most common pickups in the game. Your more powerful primary weapons require physical ammunition, a much more finite resource, and you’ll need to scour levels for ammo crates to refill it.
As for your secondary weapons, I like the idea that you functionally start out with all of them unlocked and only need to find ammo for them throughout the levels. Generally taking the form of heavy ordinance, many secondary weapons are powerful enough to one-shot basic enemies, so I appreciate that the game doles out secondary ammo intelligently enough that you never feel like you’re afraid to use it, but never have a surplus for long either.

As simplistic as it is and indeed, probably because it is so simple, the moment-to-moment gameplay of Overload is basically perfect. Your ship handles beautifully with a simple set of flight controls, every weapon feels powerful and enemy ships explode with satisfying, palpable force, sending scrap metal flying in all directions throughout the zero-G environment. Drawing on my experience with EVE: Valkyrie, I did eventually get used to twisting along corkscrewing corridors and keeping pace with enemies as they backed through vertically looping tunnels, and I loved having to develop an entirely new gaming skill. I also never got tired of firing a single enemy-seeking creeper mine into an unexplored room and watching it home in on the group of enemies waiting in ambush there.

Surprisingly there is a story in Overload, a competent if fairly wrote story of the commander of a space colony essentially declaring himself king and seceding from the government of earth. Apart from a handful of collectible audio logs, the story is smartly relegated to between-mission voice overs, where people who care about such things can listen to them without them intruding on the gameplay. Honestly though, I was actively trying to follow the story and I still found myself reflexively skipping a few mission briefings, which should give you an idea of just how riveting the narrative is. The bottom line is that for most players, the story boils down to “Here are some robots, please shoot them.” 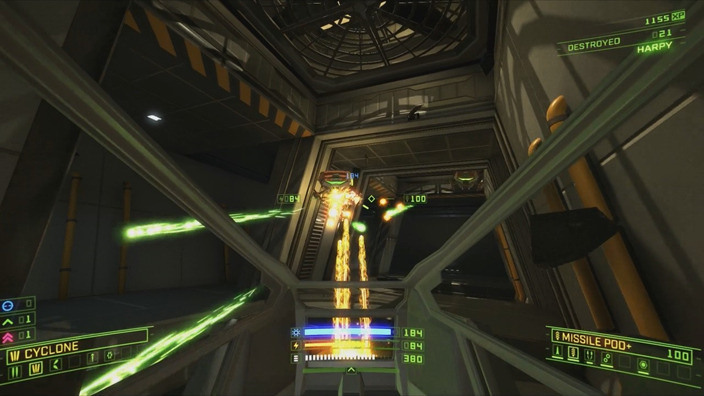 I would’ve appreciated a live, short-range map somewhere on your HUD so I wouldn’t have to pop into the map screen every few minutes, and I have to question the decision to include audio logs in the levels when I can’t focus on the text while trying to fight or hear the dialogue through the explosions. The game also never bothers to tell you that you can hold down the button for the drone to access it’s various functions (including “Off”), just as you can hold down the buttons to switch either type of weapon to bring up a weapon wheel. And while Overload’s levels are well designed, its most grating issue is that once you’ve seen one level, you’ve pretty much seen them all.

Overload’s levels have two settings, facility and cave. Whether it be multiple small facilities separated by caves, one large facility with cavernous tunnels providing shortcuts to extreme ends of the facility or the two tilesets stacked on top of each other in a sort of “ground floor, basement” arrangement. It isn’t as if the story is somehow limiting the variation in setting either. The pre-mission briefings make it clear that each level takes place on inside a different facility on a different asteroid or moon, so why does every single one look nearly identical? And if we are stuck with only the two tilesets, couldn’t we at least throw in some differently colored gemstones in the caves or neon lights in the facilities to mix things up? Even the original Quake had the good sense to color it’s otherwise samey, blocky levels different shades of reds, blues and greens, or occasionally have the sky be a different color, or to make it’s rooms more or less spacious. And speaking of space, what about, you know…space? Was space not a good enough idea for an environment in this space shooter? I can’t be the only person to have thought of that, but I also can’t see why it wouldn’t be included. Having us switch between the occasional wide-open space section and the claustrophobic corridors of the inner facilities would have helped to keep the gameplay fresh.

This is the part of the review that I’d sectioned off to talk about Overload’s multiplayer but…well, I guess I’m still talking about it, just not in the way I’d envisioned.
After progressing a significant way through the campaign, I made multiple attempts a day for over a week to get into even a single multiplayer game and was never able to do it. Eventually it occurred to me to look up how many people were playing Overload and discovered that only about thirty people at a time have been playing it for the last month. For full disclosure, I used steamcharts.com to ascertain those stats, so it’s possible they’re not entirely accurate, but the fact that the developer seems to have hidden the player numbers on the game’s Steam page does little to dissuade my suspicions. That’s too bad, because I really was looking forward to some competitive online space shooting action, a rare combination of two genres I love. On the bright side…I guess that makes Overload a hidden gem. 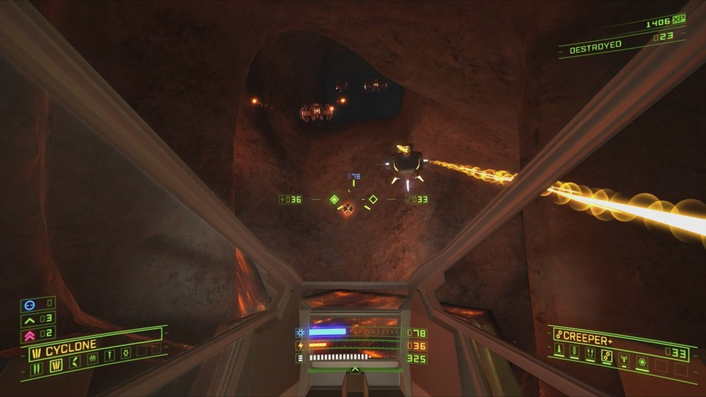 Despite a few problems, Overload does its genre proud. I would be remiss if I didn’t mention that Overload comes to us from some of the same people who made the original Descent games, and their work here establishes that they’ve still got it. The simple, satisfying gameplay is sure to give anyone who played old-school shooters like this back in the day nostalgia flashbacks, and demonstrate to anyone who didn’t why the genre became popular in the first place. And as thankless of a job as it is to include in a game like this, because no one plays a game like this for the story, it’s written and presented as well as one could reasonably expect.
It’s too bad that the multiplayer is totally dead only a few months out from release, but unfortunately that’s just how it goes for some games. Not every multiplayer experience is going to catch on, and the rock-solid single player campaign is what I’d imagine most players interested in Overload are here for anyways.

Now, who wants to see my geocities?