“A Change Of Gears”

The first time I played Onrush, I barely gave it a chance. Taking it over to a friend’s house immediately upon picking it up, I was all prepared for a nostalgia-fueled afternoon of multiplayer racing fun courtesy of the ex-Motorstorm developers Codemasters hired when Sony decided to get out of the good racing game business. But it was not to be.
Admittedly it’s on me for failing to confirm Onrush’s lack of local multiplayer, a mistake I’ve made before and one that usually ends with me turning to my friends after a short pause and saying “So……Smash Bros?”

I just about took it straight back to the library that afternoon (Yeah, that’s my secret. I’m not made of money), until my professional obligation kicked in. I took this game out to review so dammit, that’s what I’m doing. Don’t get me wrong, Onrush is a pretty good game overall, but for anyone under the impression that it’s some kind of successor to Motorstorm or Burnout……no, just no. It’s a solid racer, but a number of design decisions made apart from it’s core gameplay keep it from living up to it’s full potential. 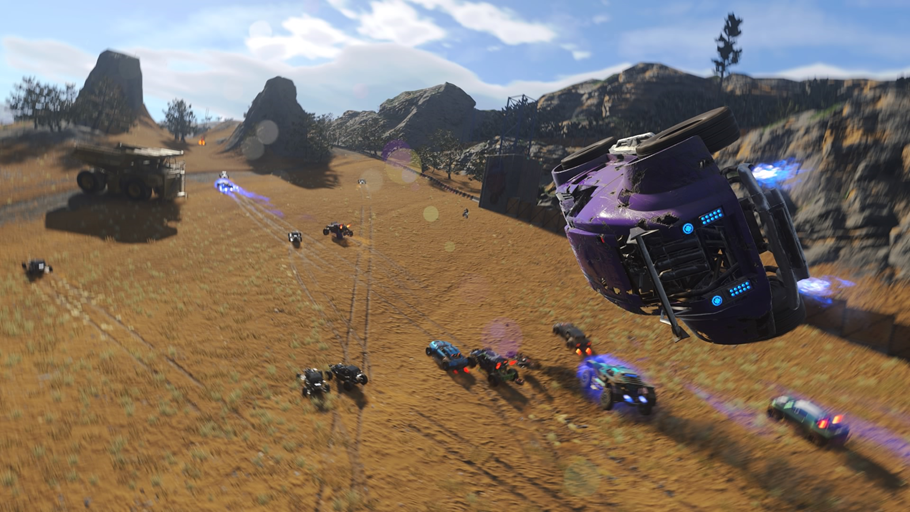 As strange as it sounds, Onrush is not a racing game, not really. Yes, you’re driving fast in a car, but you’ll rarely be trying to get somewhere before your opponent. Most of the time you’ll be trying to stay inside the pack of a dozen cars, fighting for position or to score the most points. If not for the aforementioned lack of local multiplayer, Onrush could even be called a party game. The comparison I keep coming back to is actually Overwatch. Not because there are a selection of characters to choose from to pilot your vehicles, one of Onrush’s many dalliances in forehead-slapping pointlessness, but because the cars themselves behave very much like characters in MOBAs and hero shooters with their own stats as well as unique active and passive abilities.

Every class of vehicle is useful in its own way and their different methods of building up boost (or “rush”) energy incentivizes you to play them the way they’re meant to be played, which reflects good design. The two classes of bike are easy for the other classes to take down, but can run effective interference on the other team by draining boost energy and creating Tron-style energy walls respectively. The Dynamo is essentially the medic of the game, charging its boost simply by being near teammates and whose ultimate grants all nearby teammates temporarily infinite boost. The Titan meanwhile, is the tank of Onrush, able to take a few more hits and crush most other vehicles, and whose ultimate drops a string of energy fields behind it that slow opponents and sets them up for easy takedowns by the rest of your team.

I ended up favoring the Interceptor, an all-around sort of vehicle that can move extremely quickly in bursts and charges its ultimate by narrowly missing obstacles, which in my case frequently meant skimming one tree and wrapping myself around the next one but hey, at least it gave me ample opportunity to drink in Onrush’s glorious destruction physics. 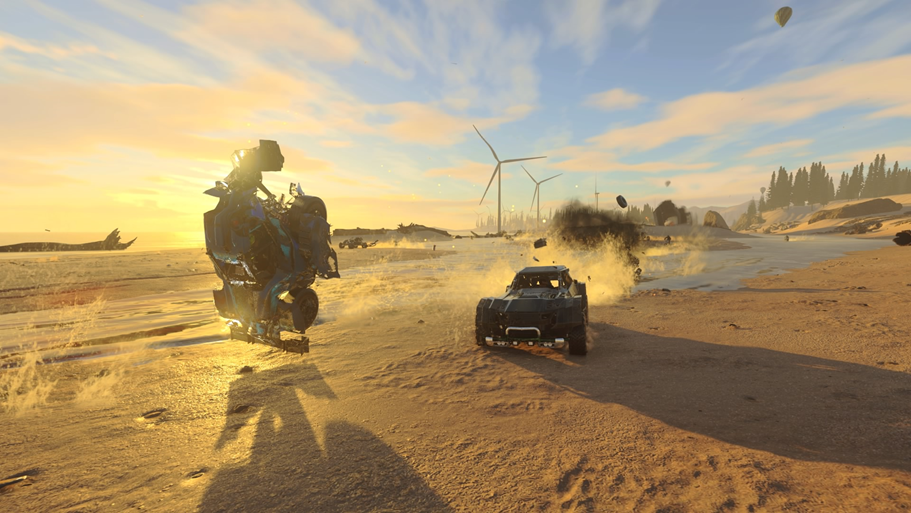 The general feel of Onrush’s gameplay is exactly what you’d expect from the developers of Motorstorm, a smooth arcade racing experience with well designed maps and a variety of vehicles with diverse abilities that each feel equally useful if played correctly. It’s in the overall design of the vehicles and the moment-to-moment gameplay where one can feel the influence of experienced racing game designers. The cars have a real sense of weight to them, but feel “floaty” enough to perform wide drifts around corners and pull off the insane stunts you’ll need to secure victory in Onrush’s respectably diverse game modes.

In Overdrive, Onrush’s primary mode, teams fight to reach a point threshold before the other, earning points by boosting and by activating your car’s ultimate ability. Countdown has you racing against a clock as well as your opponents as you drive through time-extending checkpoints to outlast the other team. Lockdown is an interesting, racing game-themed version of king of the hill in which players chase down and capture speeding circles of light while Switch is a version of elimination that incorporates elements to Counterstrikes’ Arms Race mode. Starting on bikes, players switch to a heavier class of car with each death in a limited pool of lives.

But while the core gameplay of Onrush is great, as mentioned earlier, it’s the decisions surrounding that core gameplay that let the game down in a few big ways. Firstly, too many of the cars feel nearly identical, a strangely impressive feat considering that each vehicle in Onrush has its own set of powers. Every vehicle in its class, the bikes, the cars and the trucks, all seem to handle the same way. That’s not to say that they all have exactly the same weight, acceleration and handling, just that the differences incredibly slight, and the powers don’t make the different cars seem different enough. Going back to the earlier Overwatch comparison, every character has their own set of abilities, sure, but even if every player went an entire match without using any of their powers, each character would still feel completely different because of their different movement speeds, weapons and health levels. The vehicle powers in Onrush are a neat idea, but the vehicles themselves really needed to feel more unique in the moment-to-moment gameplay, as their design only makes them feel appreciably different once every few minutes.

The second problem with this team-based game is that you rarely need to come together as a team. I know this because I spent half the single player campaign crashing into trees, flipping myself over, falling too far behind the pack or, strangely, getting too far ahead. Playing solo, my team of A.I.s managed to secure victory in almost every level and I rarely had to make more than a single attempt. But when I took Onrush online, not much changed, except that I learned how truly not-that-great I really was at any mode that isn’t Countdown.

The experience also feels a little light for the premium price of admission it’s charging, and almost everything included to make the game seem bigger are things that don’t need to be there at all, like in-game currency, character skins (which you’ll almost never see since you’re usually inside a car), and an entirely unnecessary leveling system that serves no purpose except to drip feed us god damn loot boxes.

Publishers can dress it up all they want, but the purpose of loot boxes is to artificially inflate a game’s longevity by drowning the meaningful content players actually want in an ocean of filler content like icons, profile backgrounds, emotes and other such garbage that I would argue you don’t care about even if you think you do. It’s here that I find making comparisons to Motorstorm impossible to resist. In Motorstorm: Pacific Rift, you unlocked a new set of cars for each class for each bracket of the campaign you completed. That was it, and it was great. Was there less stuff in the game overall? Almost definitely, but the rewards I unlocked actually felt like rewards, so it didn’t matter. I kept playing long after I’d unlocked everything because the game was fun.

A friend of mine opined that if a Motorstorm game were made today, it would be full of the same derivative loot box garbage (which admittedly isn’t as bad in Onrush as it could’ve been) and predatory publisher tactics because “That’s just how games are made today”. And I almost conceded the point, until I remembered The Witcher 3, a game roughly eleventeen zillion times the size of Onrush with nary a loot box or microtransaction in sight. That in turn made me think about Bioshock Infinite and the Dishonored games; huge, awesome games that respected the player and gave up their content as fast as you could come and take it. These games were designed with confidence that the people who want to play them will keep playing them. Hell, I was playing Pacific Rift with some friends yesterday, a game that will celebrate its tenth birthday this October. Does anyone seriously think that a single, solitary human being will be playing Onrush in 2028? Of course not, but here I am, playing Motorstorm: Pacific Rift, as well as countless other classically designed, good games, a full decade later. How’s that for longevity? 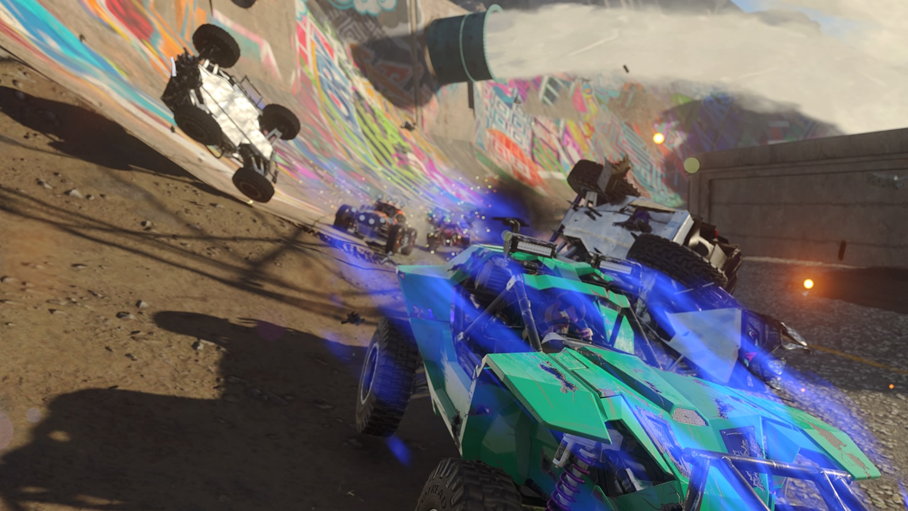 Onrush is an experimental game, and while I generally liked it, I can’t exactly say the experiment entirely worked. Onrush’s look, feel and gameplay scream “party game!”, but it’s missing the one thing that a real party game needs, local multiplayer. It’s got several classes of vehicle, each with their own set of powers, but it’s somehow managed to make many of those vehicles seem nearly identical most of the time.

I tried really hard to keep this review from simply being “Onrush vs Motorstorm”, but the fact is that the games industry really doesn’t seem to make games like Motorstorm anymore, and whether it’s fair or not, part of me begrudges Onrush for not simply being a current-gen spiritual successor to Motorstorm, like Dark Souls was to Demon’s Souls.
For me, Onrush was a library rental. A good library rental to be sure, but still an experience to get out of your system in a weekend before moving on to something more substantial.