When Steppy Pants first came on my radar, I dismissed it as just another throwaway iPhone game. A cheap distraction to take out and play for a few minutes on the bus or while waiting for a kettle to boil, only to delete it soon after in favor of the next craze. I never would have expected the majority audience of the mobile gaming market to all get behind a game with such intense socio-political ramifications.

Comically surreal and shockingly relevant, Steppy Pants gives us a glimpse into the everyday lives of extreme OCD sufferers, portraying severe mental illness in a stark and subversive way that I haven’t seen since Hellblade: Senua’s Sacrifice. Not only did Super Entertainment craft a game with an important message, they smuggled it onto the App Store under the guise of a colorful but ultimately brainless endless runner, primed to explode like a bomb of truth and realization in the mind of anyone with the luck, or wisdom, to download it. 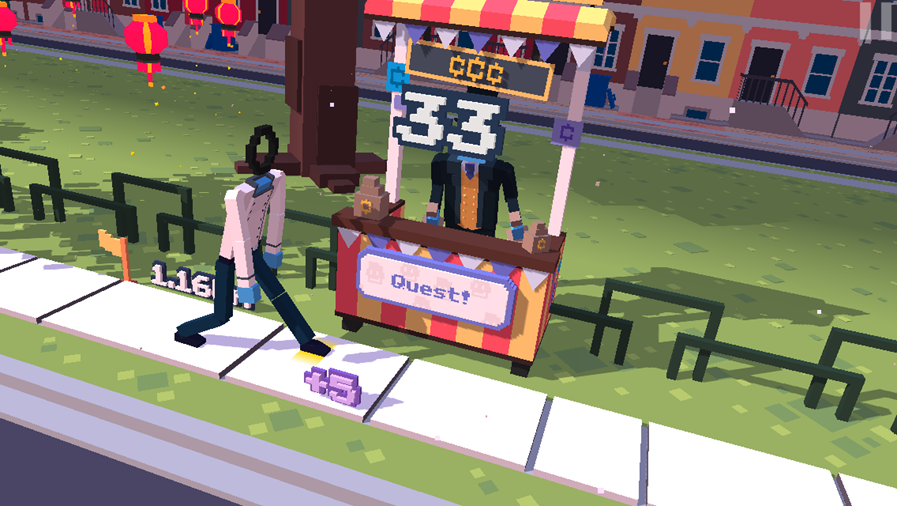 Much like the Katamari games, the world of Steppy Pants is full of bright colors and upbeat music, every citizen dancing in place. It’s a bold aesthetic choice for a psychological horror game, particularly one with a message, because to the casual observer it doesn’t look scary, it looks like everyone in the world is having a party. And they are. Everyone but you.

Like Hellblade or Life Is Strange, the gameplay of Steppy Pants is in service to the tone it’s going for. At the outset, you’ll want to instinctively groove on the upbeat atmosphere of the game, drinking in the music and bobbing along with the main character. But before too long, intentionally or not, you’ll stop focusing on the world, on the bright colors and happy people in favor of something else, something darker. Something that nobody else seems to see.

It’s the cracks, you see. The cracks in the sidewalk. For the protagonist of Steppy Pants, each crack is a yawning abyss that must be avoided at all costs. Even the briefest contact with one will pull him down into the dark, to the sunken place, to infinite death, to the spaces between spaces where even sadness can’t exist.
Similar to Hellblade’s rot system, the gameplay of Steppy Pants expertly ties together the motivations of player and protagonist, helping us empathize with the character.

Where is Mr. Steppy Pants going and why? We never find out, because the developers understand that it doesn’t matter and that knowing it would only detract from the game’s message. Super Entertainment wants us to see the world that Mr. Pants esquire sees it, to understand that wherever he’s going, he’s on his own personal voyage of the dammed, pushing ever onwards, until the moment he falls.

And in the end, we all fall.

There are other modes wherein the game drops the pretense of metaphor. One puts you in a literal hellscape where the only safe areas are assorted objects protruding from the lava, or another where our hero must outrun various nightmare creatures while avoiding impeding traps, both of which must seem like a welcome relief from the more insidious torment of his everyday life.

Steppy Pants is a rare experience that gives us the chance to view the world through a completely different lens; into the perspective of someone completely dominated by fear. It might look like fun, but Steppy Pants isn’t about having fun, Steppy Pants is about the cold, hard truths of the real world and the plight of the poor souls that live in it. I mean, you guys get it right? Am I the only one that gets it?