“Why Does A Man Climb A Mountain?”

“I created this game for a certain kind of person,” says Bennett Foddy at the start of Getting Over It “to hurt them”. It was a long time before I fully understood the meaning behind those words but understanding them is perhaps the key to getting the most out of the game. In a way, understanding those words is beating the game.

Getting Over It is a kind of methadone for obsessive types. You’re either going to give up at some point, hopefully learning in the process that not beating every game you play isn’t the end of the world, or you’re going to drive yourself crazy sticking with it until you finally reach the end, which in some ways is missing the point.
Either way, Getting Over It is a fun enough little indie game, both ridiculous and ridiculously challenging, and more than justifies its tiny price tag. 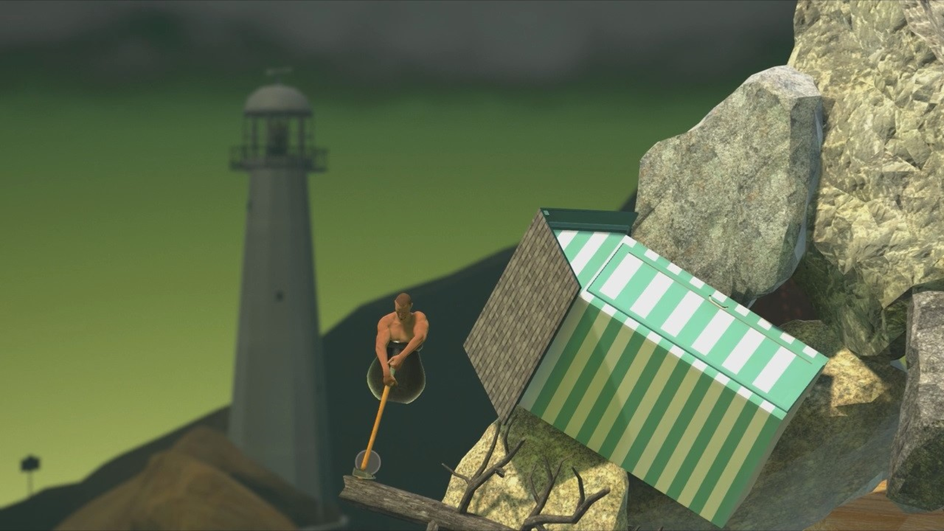 Getting Over It reminds me of one of those 2D Flash games on Newgrounds, a somewhat crude experience and one of pure gameplay, but one that at its best is still perfectly enjoyable and even memorable. Getting Over It puts you in the role of a man with his legs trapped in a cauldron who must climb a mountain using only a sledgehammer. If that sounds like a ridiculous challenge then rest assured, it is, but Getting Over It plays fair, giving you the basic tools you need to succeed and then sitting back as you teach yourself to use them.
There are no enemies in Getting Over It, the scenery isn’t going to give way as you try to hook yourself onto it, there’s no stamina bar and your sledgehammer never degrades. Every success, and every failure, is entirely your own.

The beginning of the game isn’t too hard, but does a good job of demonstrating what you’re in for in Getting Over It. I made my way past the first few obstacles of the game without too much trouble, developing on the way a technique I called the Plunge Jump, driving the sledgehammer straight down into a surface to propel myself upwards before swinging the hammer up to catch a protruding piece of scenery. This maneuver would serve me well for nearly the entire game, as would another where I learned to draw the hammer towards my body to propel myself toward objects rather than swinging it in a wide arc.

Though the exact place will be different for everyone, sooner or later you’ll run into your first “How the hell am I supposed to get past this!?” obstacle. For me, it was fairly early on, in a nearly vertical tunnel with only two small lanterns to hook onto. It only took a cursory glance for me to think “Oh god, here’s the next forty minutes of my life” and put Netflix on in the background, which I guess officially makes Getting Over It a popcorn game (season two of Jessica Jones sucks by the way, check out Black Lightning instead). 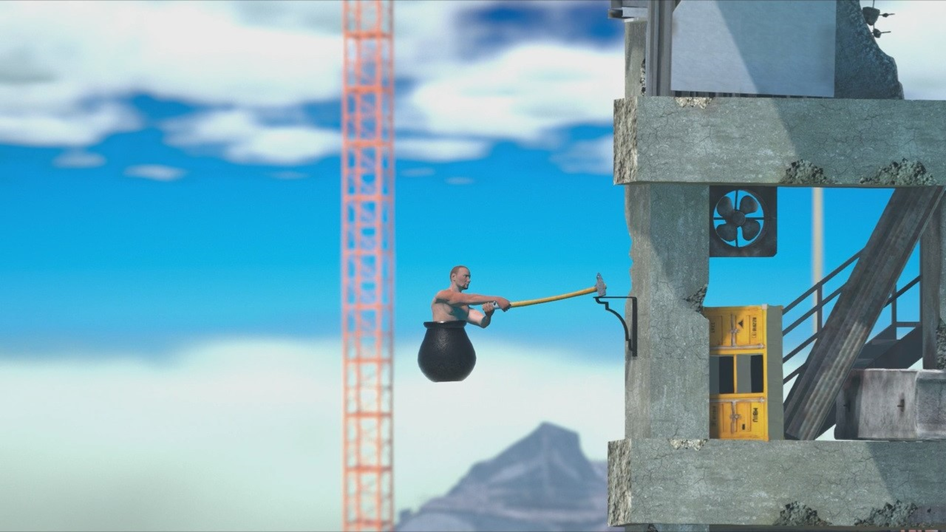 The light tunnel didn’t end up giving me too much trouble, at least not as much as I thought it would, that came immediately after escaping the tunnel when I hit a wall, literally and figuratively. A two-story concrete wall with several positively tiny grapple points that took me nearly an entire episode of Black Lightning to scale and where I would be willing to bet that half of Getting Over Its players check out permanently, as failure here can cost you most of your progress up to that point.

During my second or third attempt to climb the wall, I accidentally knocked myself away with particularly violent force a little more than halfway up, sending me to the very edge of the platform that the building was on. And looking over that edge, everything came into focus. I understood that from this point on, one misplaced swing of the hammer could send me careening in a silent scream to the ground, all the way back to the start, punctuated by the unceremonious KUNG! of the pot hitting the ground. It was then that I knew what the stakes truly were, and I knew I couldn’t fail.

My first big setback wasn’t at the concrete wall. No, it was a little farther on, after I had shimmied across some scaffolding, hanging from it by my sledgehammer, and deposited myself on the other side where I was met with another wall made up of patio furniture and various outdoor installations. Here, on my second attempt to hook my hammer onto a slide I…well, slid. Bouncing off at least two surfaces that could have saved me had I pointed my hammer the right way, I fell all the way to the bottom of the mountain, my hammer catching, mostly by accident, on the top edge of the very third obstacle of the game.

But something strange happened then, I didn’t get demoralized, not really, not any more than when a new Dark Souls boss kills me for the first time. Yes, I would have to climb the mountain again for another go at the patio monster and yes, I would have to go through that stupid light tunnel and the even stupider concrete wall to get there, but even they didn’t seem all that daunting anymore. Why? Because I knew I had beaten them before, and I knew I could beat them again. Which I did. 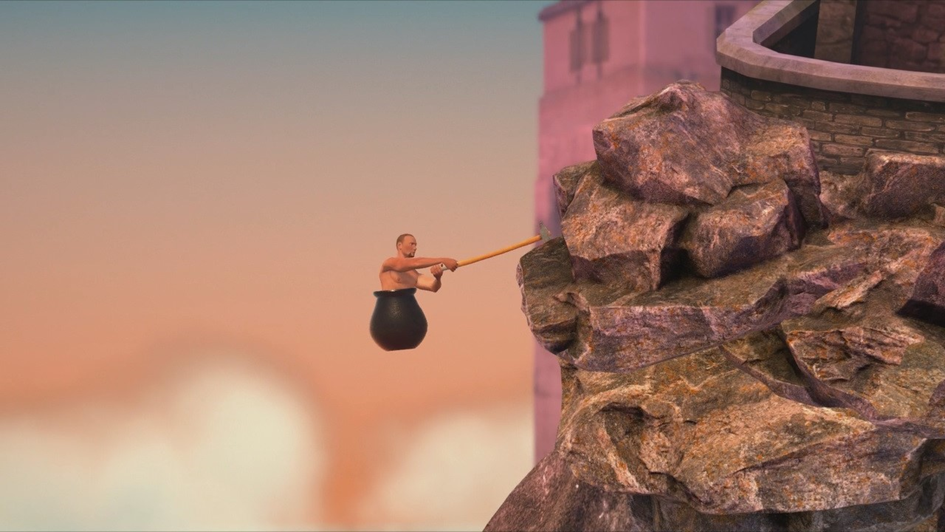 “If you make it this far, I salute you.”

Though I did make it a fair way up the mountain, I never finished Getting Over It, and neither will most people. Most games, even the harder ones have mechanics that help players through them, inching you forwards a little bit at a time until you succeed. Getting Over It doesn’t. It puts a brick wall in front of you to smash your head against, leaving it to you to decide when to stop. If you do try to break down that wall, all I can say to you is that the complete first season of Black Lightning is available now on Netflix.

You don’t ultimately play Getting Over It against the mountain or Ben Foddy, you play it against yourself. And the game? It isn’t even really on your computer.