Like a lot of people whose circle of close friends is just about big enough to fill out a hockey team, I love Magic: The Gathering. Pokémon is too simple and Yu-Gi-Oh! is so broken and exploitable that victory usually goes to whoever wins the debate over what the rules even are, but Magic’s perfect mix of approachability and depth has kept it going strong even after twenty-five years where other card games have languished or failed to catch on in the first place.

But as much as I love Magic, I don’t play it all that much. Most of my friends don’t play it, and you can’t really get someone interested in a collectible card game the same way you can with a video game due to how much time and money it takes to get into it. The closest I’ve gotten to getting my friends into Magic has been the Duels of the Planeswalkers games on my Xbox 360, and the Arena of the Planeswalkers board game, which asked the question “What if we combined inferior versions of Magic and Risk and…it……sucked? Oh god, what have we done!?“. Suffice to say Arena of the Planeswalkers didn’t exactly create any new Magic fans the night my friends and I tried it, but it did lead us to wonder “Can’t they just make a board game with real Magic decks?”.

Well, apparently some kind of government thought-detection satellites was aimed at my house that night, because that’s pretty much exactly what Wizards of the Coast did with Explorers of Ixalan and the result is a pretty damn great board game that can be enjoyed by Magic novices and veterans alike. 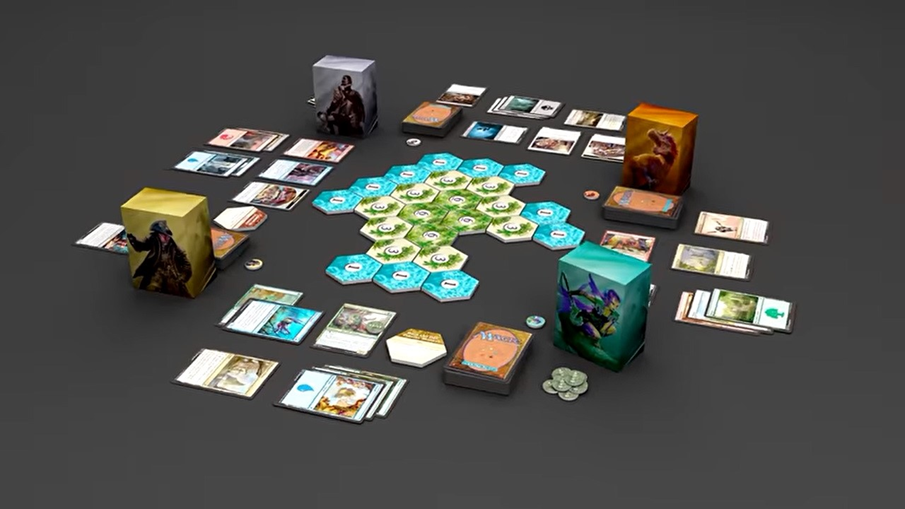 Explorers of Ixalan comes with fifty hexagonal map tiles, of which thirty per game are arranged into a Settlers of Catan-esque board between each player. Once per turn, a player can explore the island by paying the mana cost displayed on a tile, when they do, the tile is flipped and its effect is triggered.

Tile effects are divided into Quests, Events and Sites. Quests take effect once specific circumstances take place, Events are basically uncounterable Sorceries and Sites function like Artifacts or Enchantments and stay on the field providing continuous effects, though Sites can be stolen when their owner is damaged. Exploring the board also allows you to “Scout” an adjacent tile to the one you explored, locking it down and preventing other players from exploring it until your next turn.

The island of Ixalan presents an interesting gamble. Towards the beginning of a game, it’s one-cost tiles seem like little more than something to spend spare mana on for random positive effects. As a game goes on though, you’ll have to start weighing the value of the known effects of the cards in your hand against the potential value of the three and six-cost tiles on the island.
What’s more, the further into the island you go, the more you’re incentivized to keep going, though exploring could mean committing to spending twelve mana or more across several turns. Since your scout token goes away after one turn, not exploring could let your opponent take advantage of your progress.

You generally won’t know what a tiles’ effect is until you trigger it, but tile effects are almost always useful and can get pretty devastating as you move inland, though what makes Ixalan truly worth exploring is what’s waiting at the center of the board.

Of the four, six-cost tiles at the center of the board, one of them is Orazca, The Golden City, your ultimate goal in Explorers of Ixalan. Though finding Orazca doesn’t technically win you the game, it can put you in a position to win very quickly. Players in possession of Orazca draw two additional cards and deal three damage to each opponent every turn, whittling down opponents and speeding your deck up immensely. Like any Site, Orazca can be stolen by a player that damages its owner, so expect it to change hands several times if the game goes much beyond that point. 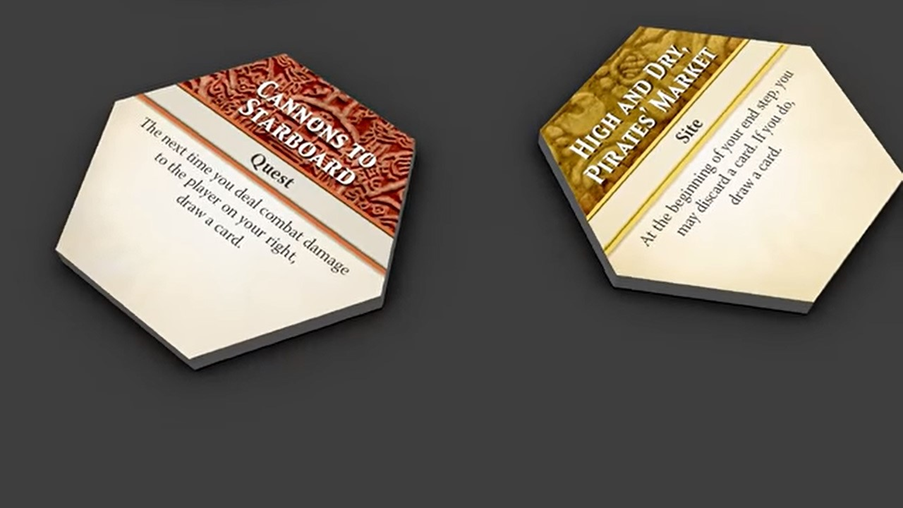 Though it probably goes without saying, Explorers of Ixalan’s board works just as well if you and your friends want to bring your own personal decks to the game or do a draft with it. I did a draft with a friend of mine using the board and found that not only did the board work just fine, it actually aided our draft decks, since it can be difficult to hammer a functioning deck out of forty-five or so random cards and the island frequently gave our mana something to do while we built up our fields.

Conversely, since the goal of Explorers of Ixalan is still to beat your opponent, you don’t strictly have to explore the board at all if you don’t want to, though not doing so will likely result in you getting hammered repeatedly by random effects while your opponents are showered in random bonuses.

It’s worth noting that Explorers of Ixalan doesn’t teach you how to play Magic. The included instructions only cover the Explorers of Ixalan board game specifically. So if you need to learn the basics of Magic, EoI won’t help you. Once you do learn the basics of Magic though, EoI’s lets you get right into the action without having to mess around with booster packs, and if Explorers of Ixalan does get you interested in Magic, EoI’s four pre-assembled decks will give you an idea of what kind of deck you’d like to build yourself.
Are the included decks tournament-ready powerhouses? Definitely not, but they’re good mid-range decks, well built and would likely hold their own in a casual game of Magic in your circle of friends. 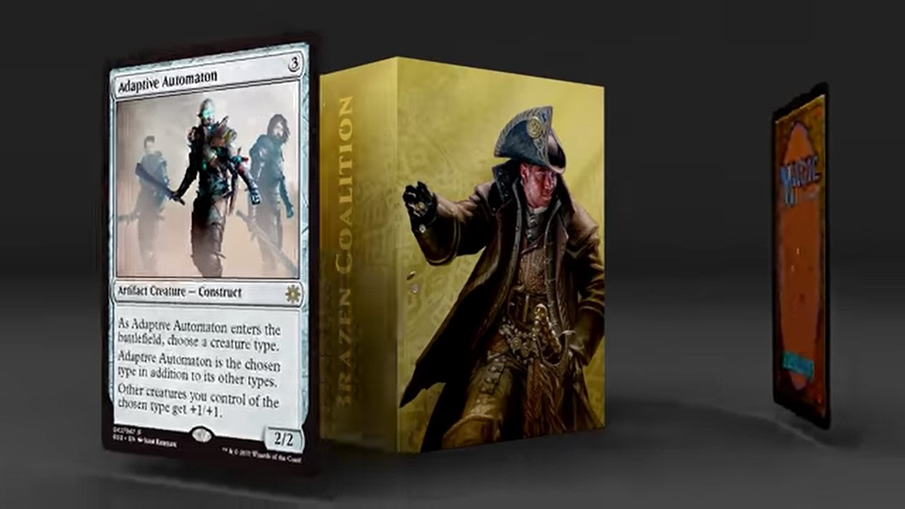 Magic the Gathering: Explorers of Ixalan is awesome, because at its core it’s still just Magic, and Magic is awesome. It’s that simple. If you like Magic, EoI is the game for you. If you’re unsure, play Magic Duels and if you like that, EoI is the game for you.
If you don’t like Magic, that’s cool too. Have fun with Yu-Gi-Oh! or Hearthstone or whatever and we’ll talk again when you turn twelve.