It’s the new year. A time to take stock of ourselves, to look at what we’re done well and what we can to better in the future. A time too look ahead. With that in mind, let’s take a look at a racing game from fourteen years ago.

I’m not going to try to disguise it, Burnout 3 is probably my favorite racing game of all time, but I’ve found that it’s surprisingly hard to talk about a game you love without just gushing about it. A lot of the factors that make up a good racing game are so elemental that they can be difficult to nail down and from a distance, most good racing games look pretty similar. But what sets Burnout 3 apart from other racing games isn’t what it does differently, but what it does best. 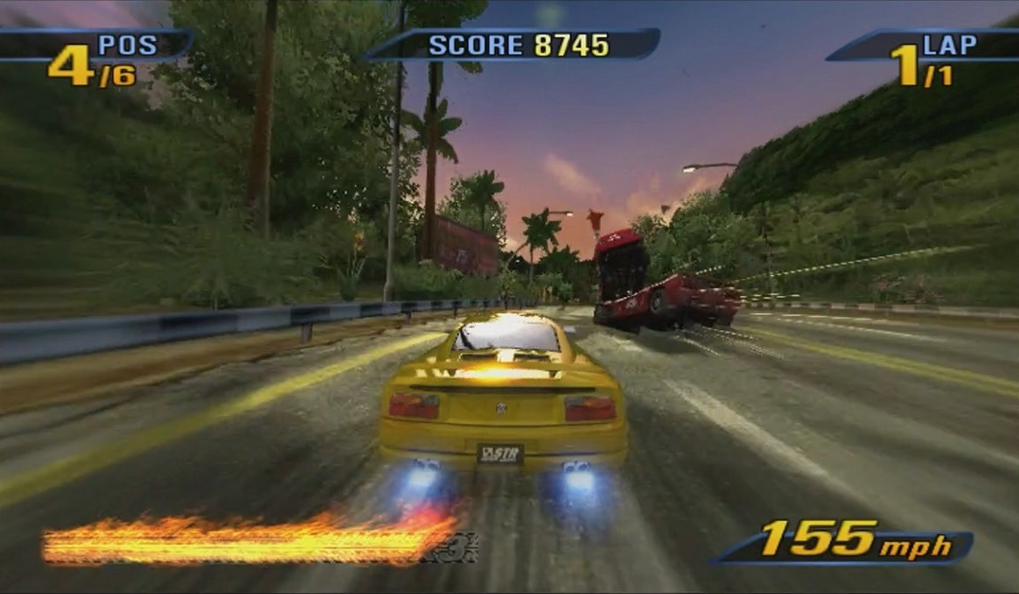 The setup of Burnout 3 is pretty much your standard racing fare. A group of racers in a loosely defined tournament have descended on several fictional cities to take part in countless races and wreck their rivals, presided over by Crash FM and it’s host, DJ Stryker, providing color-commentary on all of the racing action and glorious destruction.

Burnout 3’s destruction isn’t just for it’s own sake though, like most great games, the developers tie their gameplay into what makes their game fun. That sounds incredibly basic when you write it out, but so many games keep their reward systems separate from their gameplay without thinking about how integrating them could improve the experience.

The key to winning races in Burnout 3 lies in proper use of your boost bar to catch rivals, pull ahead of them and to escape dangerous situations. Your boost bar doesn’t regenerate though, and Burnout 3’s gameplay revolves around a risk/reward system to regain boost. Drifting, driving in the wrong lane, narrowly missing pedestrian traffic and tailgating opponents all refill your boost bar and help keep you in the race. But the fastest way to earn boost is by wrecking rival cars by smashing them against walls, into traffic or just knocking them around until they break. Wrecking a rival extends your maximum boost and instantly fills the entire bar. Your boost bar can expand up to four times it’s original size this way, one takedown at a time.

With Burnout 3, Criterion keys into that satisfying sense of catharsis as Rock of Ages, Dangerous Golf or even Angry Birds. The visual design is such that everything you do makes you feel awesome for pulling it off. Taking down a rival racer, time slows as the camera zooms in to show them flipping over a guard rail through a shower of sparks, shards of metal falling away from their crumpled chassis as your boost bar gets a new section bolted onto it with a satisfying slamming sound.

When you do crash, either from battling a rival or for other, less glorious reasons, you aren’t completely down for the count. Holding the A button after crashing activates the Aftertouch system, slowing down time and allowing you to steer your wrecked vehicle into the path of other racers. Any takedowns you manage in Aftertouch follow the same rules as normal, granting boost and ensuring you don’t fall too far behind. 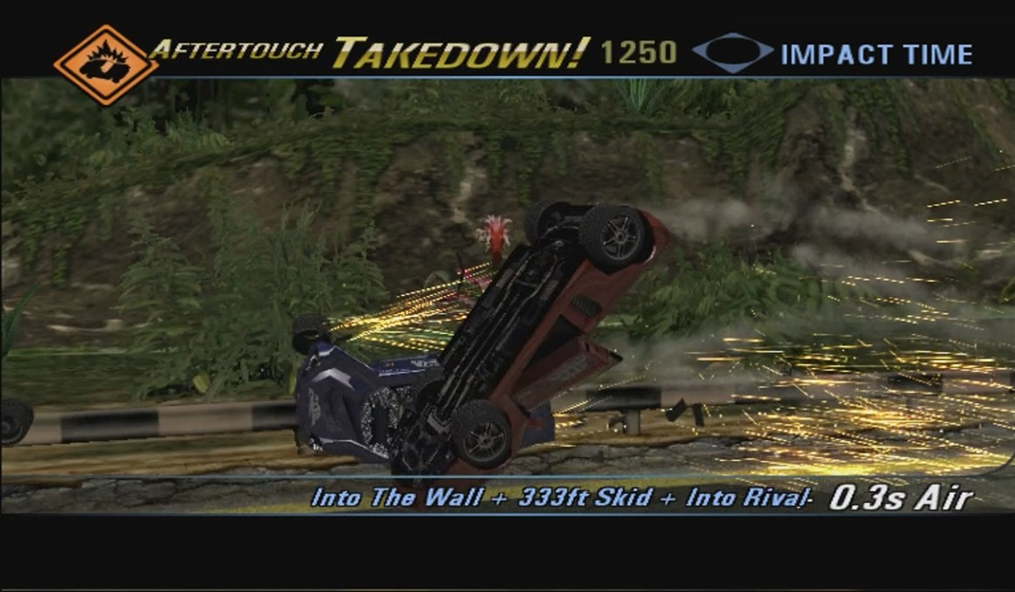 There are a good variety of race types in Burnout 3, from old-fashioned circuit races and cross-country sprints to Elimination, where the racer in last place explodes at the end of every lap, to Road Rage, which challenges you to wreck as many rivals as possible. Every class of car has it’s own set of challenges attached to it, unlocking a new class of cars when you near the end of the preceding one.

Unique to the Burnout series is Crash mode, a separate mode from Burnout 3’s main set of races, but one nearly extensive enough to nearly be an entire game on its own (which indeed, it would later become in Burnout Crash). The goal of Crash is pretty self-explanatory, crash into an intersection, collecting various bonus pickups on the way and cause as much damage as possible.

Though driving into traffic and causing a pileup is about as easy as it sounds, getting a high score in Crash is usually much more difficult. Often, the key to victory lies in grabbing score multipliers, threading through small intersections to reach larger ones, or knocking cars from one lane into other lanes to cause a chain reaction of crashes. Many levels in Crash mode are laid out like puzzles, and require you to identify which bonus pickups you should go for in a given level and which ones are traps, as grabbing the right score multiplier can be the difference between getting the best possible score and having to lug home an unsightly silver medal, the coward’s gold.

Like a lot of good racing games, Burnout 3’s mission structure has a bit of flexibility to it, in that playing specific race types will unlock more races of that type. Want to race? Just play races. Want to wreck stuff in Crash mode? Crash to your heart’s content.
Though Burnout 3’s multiplayer servers have been offline for a good while now, every multiplayer mode can also be played locally, including both cooperative and competitive races and crashes as well as a tournament-style crash mode for up to eight players. 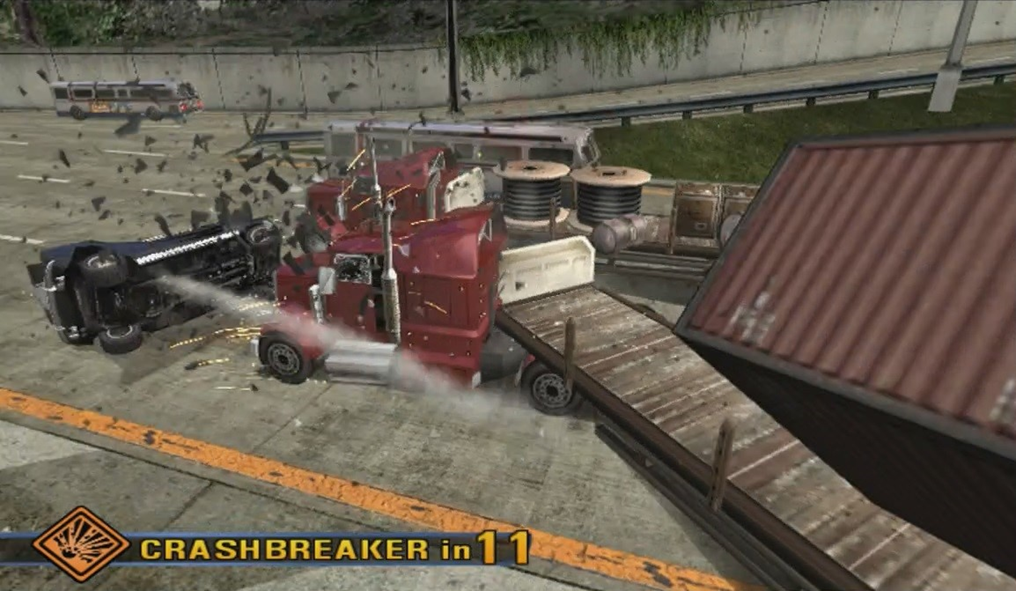 Burnout 3 has better than sixty cars available and features a rather novel system for unlocking them by today’s standards, you have to play the game. At the end of each race or crash, the game grants you points based on how you did and unlocks new cars as you reach each threshold.

But wait, isn’t this an EA game? Where’s the online pass? Where’s all of the useless bling to slap on my car that nobody notices when they’re actually racing? For god’s sake, where are the microtransactions!?

Obviously I’m being a little facetious, but going back to Burnout 3 after playing games like Overwatch, Destiny 2 and Call of Duty WW2 was incredibly refreshing even though I already knew how it’s progression system worked. Because holy crap, suddenly I’m getting rewards that directly correlate to how well I did at the game; no loot boxes that might give me a new car color or a single headlight to put towards a car I want to drive a month from now. I’m getting rewards that actually feel like rewards. How quaint.

I do have my gripes with Burnout 3, but honestly, most of them come down to strange design decisions rather than outright bad ones. Firstly, while I generally like elimination races, Burnout 3’s approach to eliminations usually makes me take a second look around the map to see if there isn’t anything else to do. Unlike eliminations in most racing games, Burnout 3 doesn’t eliminate players based on a timer. Instead, the game makes you do one lap around the track per player, with the racer in last place exploding once everyone else crosses the finish line each time.

Not that it isn’t fun, but it means that an elimination race can take forever, even longer than the game’s cross-country endurance races, and it highlights why most racing games use timers to eliminate racers. Luckily, Criterion learned their lesson in time to do eliminations properly with Burnout Legends on the PSP, a brilliant portable racing game almost as good as Burnout 3 itself.

Burnout 3 also has a habit of occasionally crediting you with takedowns you really had nothing to do with. Most notably, the “Psyche Out” takedown, which you get for essentially tricking a rival into crashing. I appreciate Criterion’s efforts to create a system smart enough to credit you with indirect takedowns, but it sometimes feels like you’re playing the game in the presence of a five year-old who thinks you’re the best Burnout player ever. Sometimes, a rival crashes near me on a narrow stretch of road, and it’s like the game jumps up and goes “Wow! You made that guy think you were going to hit him, so he tried to get out of the way and crashed! You’re so good at this game!”

Uh, y-yeah. That is what I did. On purpose. Totally.

Finally, it wasn’t until I went back to Burnout 3 that I noticed how many billboards for real-world products this game has dotting it’s tracks. This is really more of an observation than a complaint, but no developers seem to do this anymore, not even relatively insular companies like Blizzard that could easily put up billboards for the latest Starcraft 2 DLC in Overwatch or vice-versa.

Burnout 3 on the other hand is rife with billboards for games, products and services like Tiger Woods Golf, Maxima FM, a Spanish EDM radio station and an anomalous number of ads for Need For Speed Underground 2, which I’m pretty sure my brother actually bought at some point now that I think about it, so well played, EA. 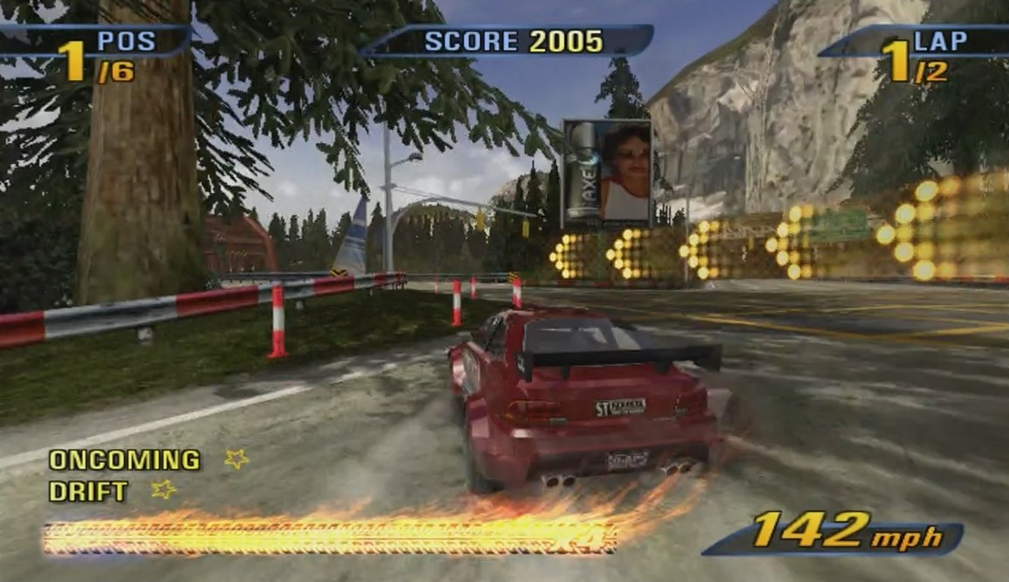 “Man, I could sure go for a refreshing, ice-cold bottle of AXE all of a sudden.”

In the years since my initial experience with Burnout 3, I’ve found myself judging the quality of racing games by how they compare to it. How does the roster of cars stack up? Do they handle as well? How does the soundtrack compare? What’s the track design like?

It isn’t as if no game has met or even exceeded those criteria by the way. The Motorstorm series gave Burnout a serious run for its money during the PS3’s lifespan, but few racing games attempt to evoke that same sense of reckless, carefree fun, preferring instead to go for a more realistic tone. That being said, the upcoming Onrush, developed by many of the same people who worked on Motorstorm looks like a fun, fast paced racer, with cool cars and great music; even if, like all racing games, it will inevitably feel the lack of DJ Stryker.

DJ Stryker is actually a real person by the way. A talented DJ, Stryker was probably most popular in the early to mid-2000’s and perhaps best known for his work on Loveline, AKA “the best radio show to have ever existed and I will brook no discourse”. Stryker co-hosted Loveline for three years of the show’s thirty year run.
The name Stryker is a reference to the movie Airplane! by the way, and if you’ve never seen Airplane!…well, it might be time for you to take a serious look at where your life went wrong.