I hope these letters find you well. I think the hardest part of this war for me has been finding flat, dry surfaces to write on. I’m writing this one in a little coffee shop in…you know, I just realized I can’t say for sure what country I’m in right now. Germany maybe? Europe anyway.

All in all it’s been a good war. Good campaign, good frontline skirmishes and some good characters met along the way. Maybe not the best I’ve fought in, there were couple of annoyances, both big and small, but one I’m glad I took part in. 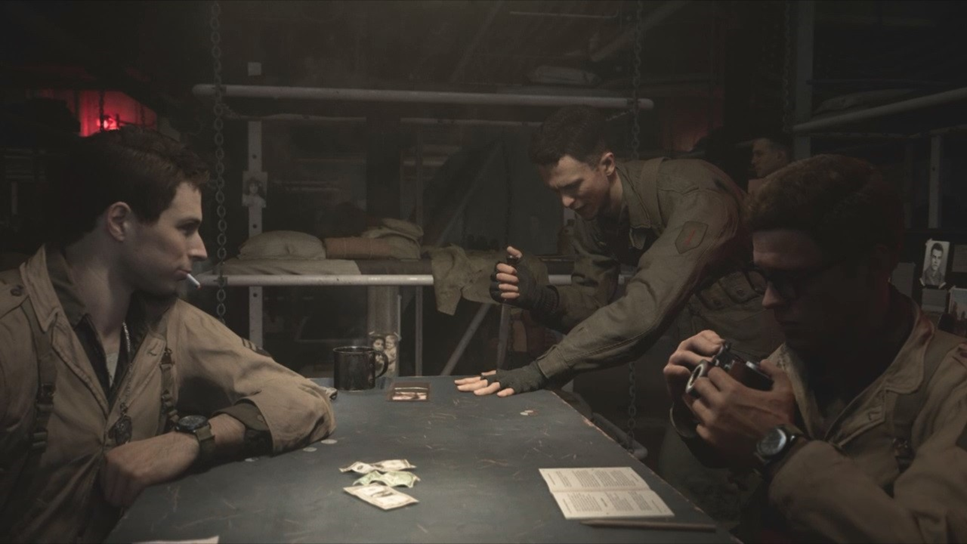 Stormed Normandy today after spending a week on the ship heading towards the front. Not much in the way of training en route, Command mainly seem to want us to make some friends and have a good time to juxtapose with the hardships of war later on. Filling out my squad is Zessman, my reckless, wisecracking friend, a guy I ended up nicknaming “Shades” because his only defining character trait is that he wears glasses, and Aiello, who I could swear died at least twice over the course of the tour but eventually made it out okay. I think.

Things looked pretty rough at first. The minute we hit the beach we were told to rush some machinegun nests, but you know me Ethel, I can’t run for more than a few seconds at a time. Well, I can, I just don’t like to. You know what it is? I think I’m just lazy.
Didn’t help that there wasn’t any cover. CO told me to hit the deck, but wouldn’t you know it, those clever Nazi bastards can shoot down too! That’s German ingenuity for you, I guess. I know a lot of people died in that battle, I just didn’t expect so many of them to be me.

At one point my CO started screaming at me to “Grab the bangers!” and then “Use the bangers!”. Didn’t have a clue what he was talking about. Kept expecting him to hand me a pack of sausages. Turns out it was a bomb. Disappointed.

So I got shot up a whole bunch, but we took the beach eventually. Kept waiting for my wounds to heal by themselves until someone handed me a first-aid kit. Quaint. Never thought I’d see those again. Kept things interesting. After a while though, I was just about choking on the things. Zessman would yell at me to patch myself up if I so much as cut myself shaving. 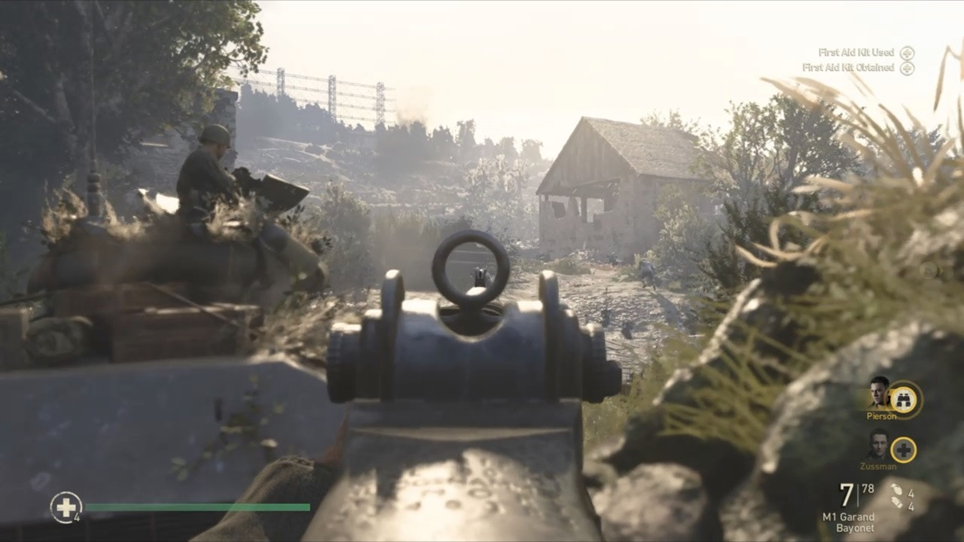 We made our way inland today. Zessman took a knife in the gut back at Normandy, but was back on his feet making wisecracks ten minutes later. Was thinking of holding him in front of me for the rest of the tour or maybe strapping him to the front of one of the tanks, but decided against it in the end. Couldn’t find enough rope.

Everything’s real pretty over here Ethel. The countryside and rural areas yeah, but even the bombed out buildings and city streets look a lot more colorful and alive than they do in a lot of other wars I’ve fought in.

Guns out here handle real nice. Smooth. Satisfying to shoot. Having only a few bullets in most guns really forces you to take your time and line up your shots. That and the whole medkit thing means you gotta be real careful out here if you don’t want to end up on the wrong end of someone’s coming-of-age story.

Got to drive a tank today. Tough. Powerful. Easier to drive than you’d think. Played a nice game of cat and mouse with the German armor. Pretty swell really, just wish I could’ve driven it for more than ten minutes. Same deal with the plane they let me fly later on. Fun, but I’d barely gotten used to the controls when they kicked me out again.

We got into a lot of gunfights as you might expect, it is a war after all, but our campaign stayed pretty focused throughout. Every mission had a fair bit of variety to it, whether we were commandeering an AA gun from the Germans, covering guys with sniper rifles or doing a bit of espionage in Paris, it was never boring. 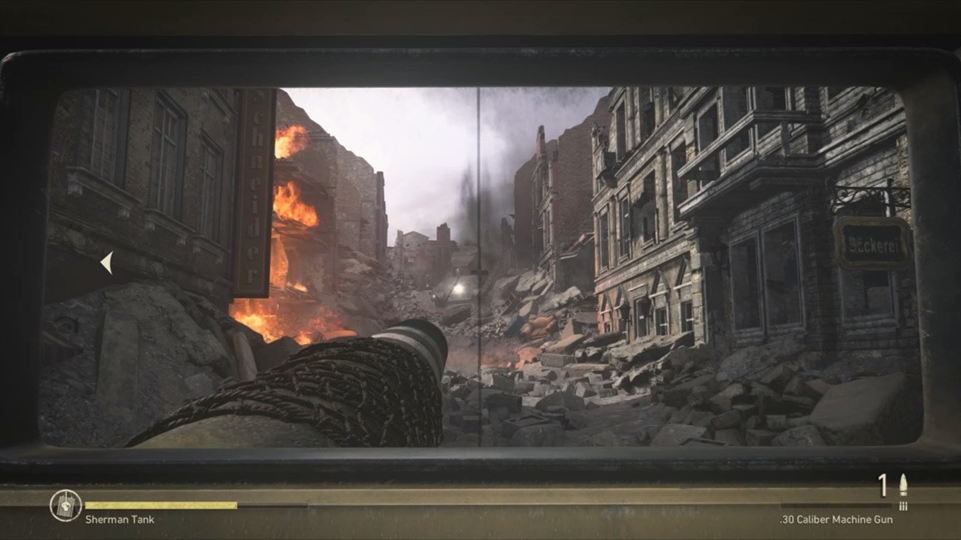 Crossed the Rhine river yesterday. Everyone’s saying we’ve got the Germans pretty much licked, so since this campaign’s over, a bunch of the guys got together to go mess around at the front. A bit of a mixed bag honestly. Good, but not without a few headaches.

Headquarters is a mess. I swear there must be a hundred soldiers running around here at any given time, all trying to navigate an HQ the size of the average coffee shop. Trying to get anywhere is like moving through a heavy fog made of fatigues and army helmets, so it wasn’t until the third or fourth time I came back to base that I noticed the quartermaster’s tent not ten feet away from me.

If that wasn’t enough, there was a constant barrage of supply crates raining from the sky, called down by guys back from missions. It’s like a hailstorm of wooden boxes guys are just calling down willy-nilly on any flat piece of terrain, then cracking them open on the spot and waving the contents around like I care what they just got.

I’m not totally immune to it either. Command sent a few boxes my way and I gave them a look, more out of obligation than anything. But half of the stuff in these boxes are things I’m not even cleared to use! But the worst part is that whenever I’m at HQ I get badgered to buy more of them with my own money! Isn’t that just about the greediest thing you’ve ever heard of? Whoever came up with this system ought to be ashamed of themselves. I mean, isn’t it enough that I’m here at all?

Once we got out of that slapdash excuse for an HQ, things actually started going pretty well. Like our main campaign, the missions we were sent on had a lot of variety to them. We escorted tanks, planted and defused bombs, defended beachheads and fought long battles through city streets.

My squad even got tasked a couple of times to secure a ball just lying out in the middle of nowhere. Thought that one would be pretty easy, but it turned out the Germans wanted it too! Not sure why the possession of a soccer ball is important enough for both sides to send hundreds of soldiers to their deaths over but hey, we are in Europe.

Had that crazy dream again last night, Ethel. I dreamt I was walking through the streets at night with a couple of guys when all of a sudden, a bunch of zombies come at us! We fight them off but they just keep coming in waves until what started off as exciting just gets boring and eventually kind of annoying; mainly because they get so tough after a while that fighting them just stops being fun.

Not that it isn’t fun for a while but, you know, I just feel like I’ve been here before. For what it’s worth this one wasn’t as bad as they’ve been before, so who knows? Maybe the next one will be better. 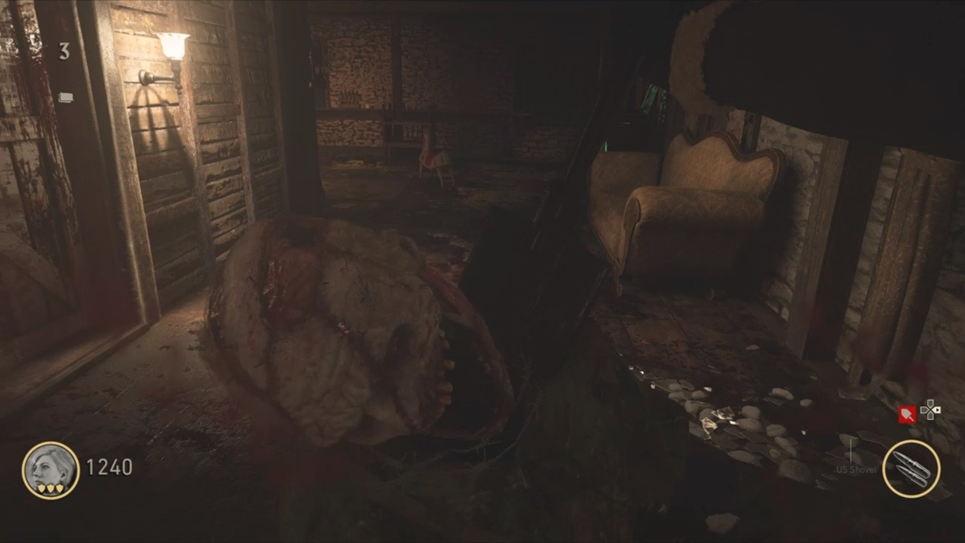 This war wasn’t all sunshine and roses Ethel, but I’m glad I came in the end. Both the campaign and at the front were exciting with lots to do, and no one part overstayed it’s welcome. The good definitely outweighs the bad so if you know anyone thinking of enlisting, give them my regards.