There’s a reason why you don’t see many comedy movies coming out at any one time compared to drama, action or other popular genres; good comedy is hard. I’m no screenwriter, but it seems to me that the formula for reliable comedy largely boils down to presenting serious things in a ridiculous way or ridiculous things in a serious, matter of fact way. The latter description is part of why the Naked Gun trilogy remain some of the funniest movies of all time to this day.

But if good comedy is hard to pull off in passive mediums like movies and TV, then developing a good comedy game must be a fairly herculean feat. The added dimension of interactivity means it isn’t enough to just tell a joke every once in a while, humor need to be woven into the world around you. And just as you drive the action in games like Call of Duty and push through the horror in Silent Hill, so too must the player have an active role in a the comedy of a game. That sounds hard to do, and judging by the number of good comedy games out there it’s even harder than it sounds. ACE Team have pulled it off though, and for a second time no less, with Rock of Ages 2, a stellar game with unique, solid gameplay that manages to be relentlessly funny at the same time. 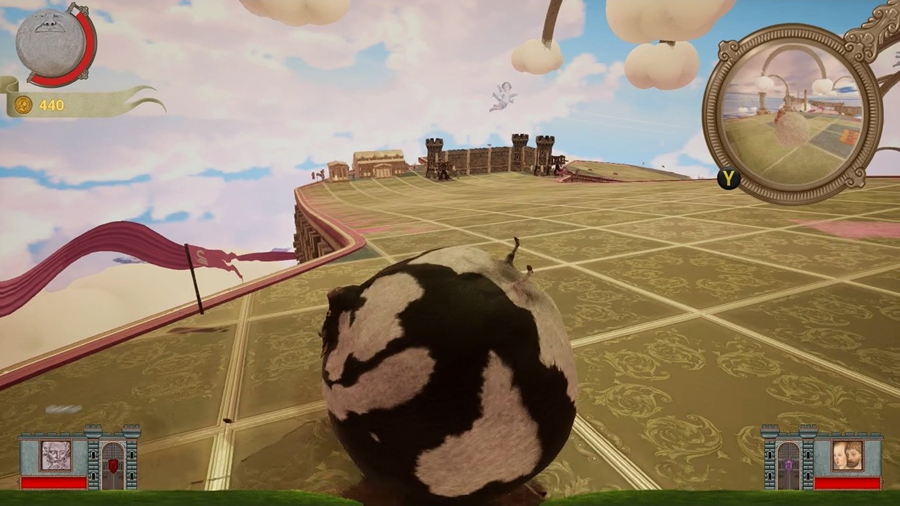 What makes Rock of Ages 2 so consistently humorous is that the gameplay itself is funny. Like a lot of strategy games, your goal is to destroy your enemies’ base, but where other strategy games would have you build up a balanced, sizeable fighting force and outfight your opponent with clever tactics, RoA2 has you take a slightly more direct route and break down your opponents base a piece at a time with giant boulders.

It’s a ridiculous premise that ACE Team leans into entirely by using absurd, surreal imagery to make sure that something funny is always happening on screen. It helps that the entire game is also beautiful to look at. ACE Team has always favored appealing aesthetics over photorealistic graphics to the benefit of their games.

The developers experiment with a different art style in nearly every level and almost always nail it. In a level based off of Edvard Munch’s The Scream, hills of flowing orange and yellow give way to a sea of warm crimson, evoking the pastels in that iconic painting. Every surface in the Garden of Eden level is comprised of gleaming, sterile marble slabs and columns floating in a sea of clouds. Many levels seem to have been drawn from completely different games, but that aesthetic of surreal absurdity persists across each level of Rock of Ages 2, keeping the experience consistent.

Surprisingly, Rock of Ages 2 does have a story, even if it’s only purpose is to serve as another long-form joke that permeates the entire game. Atlas, having grown tired of holding up the earth, goes on the run from God across…the earth (hmm) encountering a number of historical and mythological characters along the way. The game mashes together both real and fictional historical figures with reckless abandon, and animates the cutscenes that open every level with nonsensical but hilarious, Monty Python-esque animation. 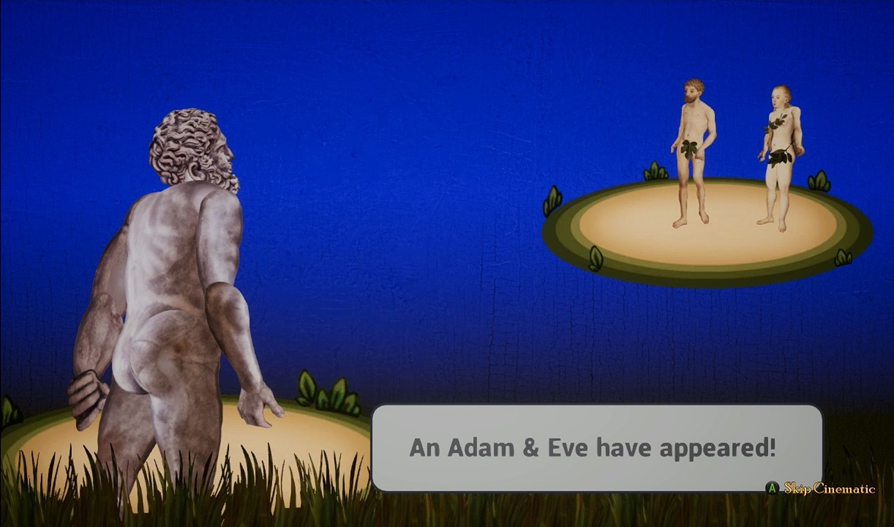 But a ridiculous premise isn’t enough to prop up a game all on it’s own, and the developers have brought their A-game to Rock of Ages 2. ACE Team’s games have always been a little rough in the gameplay department, not bad, but not as refined as they could be. That slight lack of polish is usually worth putting up with to experience such weird and wonderful games as Zeno Clash, Abyss Odyssey or indeed, the original Rock of Ages. Luckily, ACE Team have done a good job tightened up the gameplay of Rock of Ages for the sequel.

Gameplay in RoA2 is a little more involved than just smashing yourself into your opponent’s castle gate. For one thing, you actually have to get there by navigating the winding courses of each level, avoiding the various traps and hazards your opponent sets to try to damage your boulder or knock it off course. The more damaged your boulder is, the less momentum you’ll be able to build up and the less damage you’ll be able to deal to your opponents gate. Of course, you’ll also want to keep your opponent from destroying your castle, so between runs with your boulder, you’ll spend time laying various traps and obstacles on your half of the level. Traps vary from straightforward defenses like brick walls and explosive barrels to more unorthodox defenses like spring-loaded floorboards or clusters of small brown cows that act like caltrops, sticking to a boulder for a short time and hobbling it’s movement.

Because placing traps requires gold, and because gold is primarily acquired by dealing damage to your opponent, there’s an inbuilt feedback loop in Rock of Ages 2’s gameplay that’s both smart and satisfying. You want to place your traps well so you can better defend yourself while attacking and you want to do a good job of attacking so you can afford to place more traps.

Each victory unlocks and handful of new traps and tools to defend your castle with, as well as a new boulder type to help you navigate the ever-expanding defenses of your enemies. Boulders come in all shapes and sizes, from the standard stone Boulder to the fragile but light Balloon Boulder that can jump great distances to the mighty Block of Ages, a giant stone cube that doesn’t roll very well but always hits with maximum force.
When you’re rolling your boulder, a small window in the corner of the screen displays the progress of your opponents boulders as he rolls through your section of the level. It’s a deceptively clever bit of design, as watching your opponent navigate your obstacles, showing you where your defenses need to be stronger is as useful as it is cathartic to watch your opponent blunder face first into all of your cleverly placed traps.

The game world is fairly open-ended, with several accessible levels at any given time. If one level is giving you trouble, you can leave it and go in a different direction for a while, unlocking more traps and boulders until you feel ready to take that difficult level on again.

Rock of Ages 2 also shakes things up every once in a while with a boss fight against a creature of classical antiquity in a specially designed arena. Most of these boss fights are a test your platforming skills more than anything else and are largely reminiscent of bosses in old-school 3D platformers like Super Mario 64, where the main challenge is getting to the boss and jumping on them. The design of the boss fights isn’t as tight as it could be and one can tell that the gameplay of RoA2 wasn’t designed with direct combat in mind, but they’re a fun little distraction from the rest of the game and provide a memorable visual spectacle if nothing else. 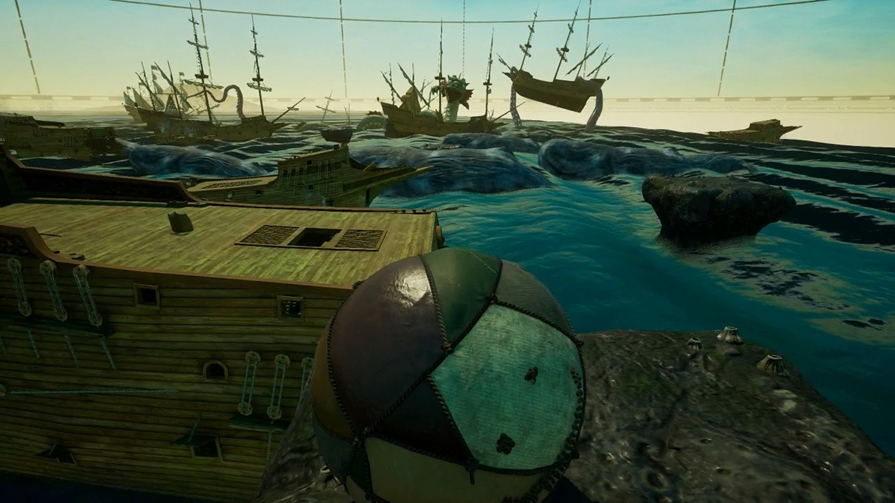 Outside of Rock of Ages 2’s story mode, the game features several additional modes to keep the experience fresh and extend play time. My personal favorite was Obstacle Course, which takes the standard gameplay of Rock of Ages and pares it down to only the attack phase. Over three rounds, you’ll race through a course with increasingly heavy defenses against other boulders and try to be the first to reach the castles gates.

The game’s few other modes are little more than cheap distractions. Time Trial tests how fast you can get to the end of a level with no traps or obstacles to slow you down and Skee-Ball, added not long after RoA2’s release, is nearly the same, the only difference being that you build up points by hitting targets as you go and multiply them by landing in giant Skee-Ball target at the end.

Every mode in RoA2 including story mode can be played in splitscreen with a friend or taken online for games of up to four players. The game’s primary mode, War, works perfectly well with two-player teams and the possibility of two boulders rolling down your course at any given time really forces players to step up their defense game. While I spent the vast majority of my time with RoA2 in it’s story mode, these supplementary modes managed to hold my interest for a while and mixed up the standard Rock of Ages formula which would undoubtedly be poorer without them. 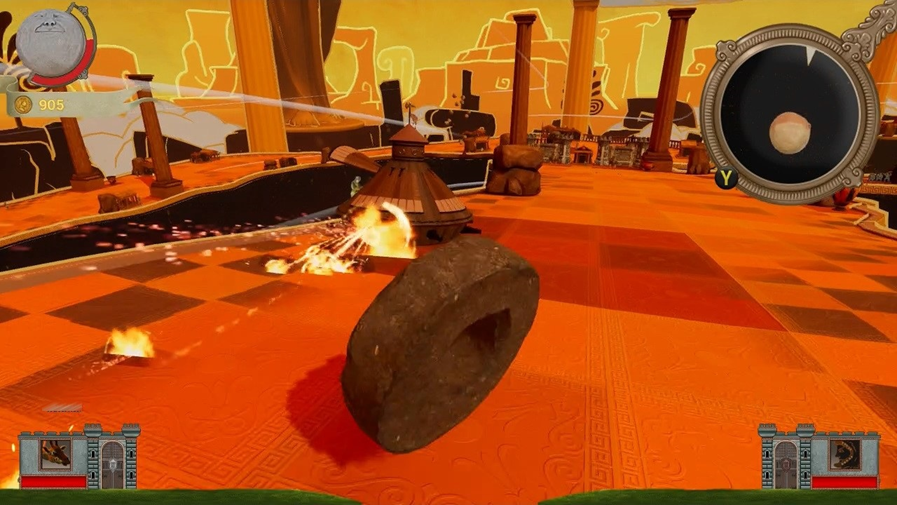 You probably won’t be playing Rock of Ages 2 six months from now, more likely you’ll blast through it in a couple of afternoons, but for the twenty-odd bucks it costs you’ll more than get what you paid for. The game’s sense of humor remained consistently funny and the solid, resoundingly original gameplay coupled with the catharsis that comes from breaking all of your opponent’s stuff kept me engaged throughout.

ACE Team is probably one of the best indie developers working today. Their output is always unique, solidly designed and clearly made with real heart. If you’re on the fence about this weird-looking game, do yourself a favor and check it out. You won’t be disappointed.