Most gamers don’t appreciate how intimidating Real-Time Strategy games can be. There are dozens of individual elements to keep track of and everything you click on seems to plaster the screen with a different set of information and commands. Next to something like Microsoft Flight Simulator, few other types of game throw so much information at you at once and the complete information overload can make the average persons eyes glaze over no matter how good it might otherwise look or what awesome mechanics lie beneath the surface.

Several games have attempted to streamline the Real Time Strategy experience somewhat, and though no game has exactly perfected the “Simplified RTS” just yet, Tooth and Tail fares better than most. It’s unique aesthetic and focus on atmosphere drew me in and it’s accessible gameplay kept me playing, even once it’s difficulty really started ramping up. 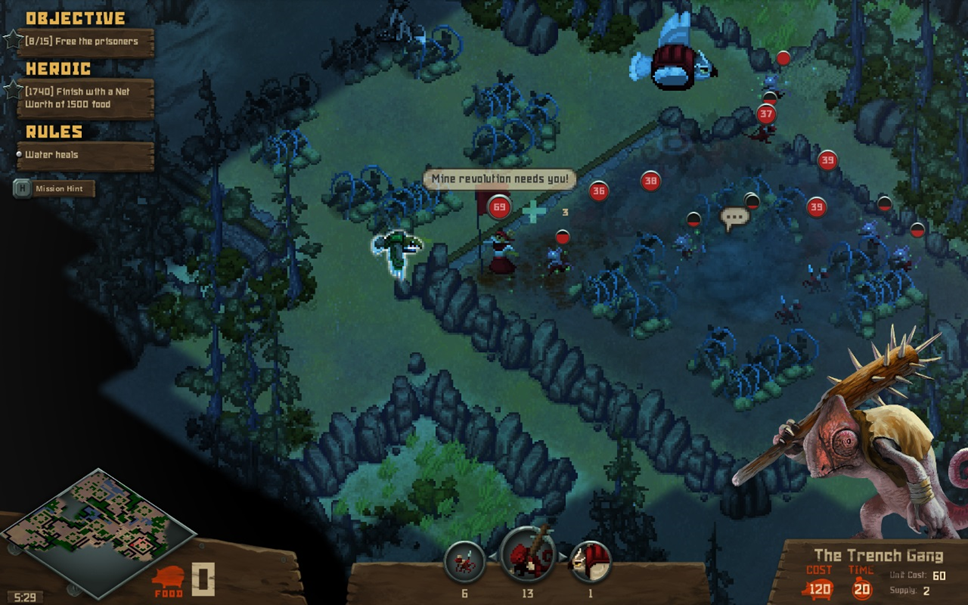 On the surface, Tooth and Tail makes an effort to be as easily accessible as possible. Everything is streamlined, from the single resource to a single building per unit type to simplified command inputs. Tooth and Tail uses a similar control scheme to Brutal Legend, where you control a character on the battlefield and lead your army from that characters perspective. Want your army to attack? Run up to your intended target and call your forces over to it. Need to retreat? Then run away and rally your army to your location. Unique among RTSs, this can lead your mouse itself getting attacked and killed, eliminating your ability to issue commands for a few seconds until your hero respawns, which can of course also be done to the enemy.

Speaking of mice, the cast of Tooth and Tail consists entirely of anthropomorphic talking animals, embroiled in a war based roughly on the Russian Revolution of 1917. The grounded nature of the setting juxtaposed with the fantastical visuals give the game a darkly surreal quality that persists throughout the entire experience.

Outside of a few episodes of Hardcore History, I don’t know much about the Russian Revolution and since it’s not exactly a common setting, Tooth and Tail would have been a great opportunity for some tangential learning. While I didn’t exactly come away from Tooth and Tail with any more insight into real world events, the game does do an good job of world building by letting you run around each factions basecamp in between missions and speak to the various civilians, soldiers and POWs in the area. Most interactions with these NPCs are only a handful of lines long, but each provides a snapshot of the many different kinds of people that populate Tooth and Tails world; informed by the world around them as they in turn inform the player.

For me, the most interesting (and most disturbing) part of Tooth and Tail’s world was in it’s portrayal of the swine, the games name for pigs. Pigs are pretty much the only non-carnivores in the story, and as such would seem to have no stake in the war over food except for the fact that…you know, they’re pigs. Swine are essentially slaves in Tooth and Tail, brought up with no other purpose other than to be eaten. But what makes it truly unnerving is that the swine are both aware of this and seemingly completely comfortable with it, speaking with unfailing politeness to their captors and frequently generally displaying equal or greater intelligence.

As much as anything else, it was Tooth and Tail’s atmosphere and dedication to world building that compelled me to keep playing, in spite of it’s occasionally brutal difficulty. 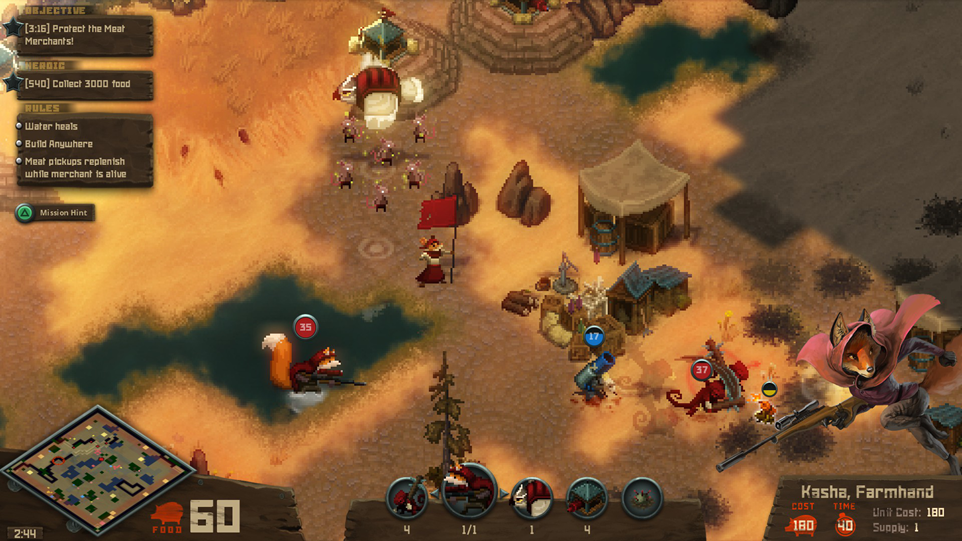 Streamlined mechanics don’t make Tooth and Tail an easy game, far from it. Games with only a few basic rules can make for some of the hardest, one-mistake-and-you-lose games around (Chess anyone?) and Tooth and Tail is no exception. A few misspent resources or a few lost units at the beginning of a match can kick off a slow defeat over the next ten minutes. There may only be one type of resource, meat, but what do you spend it on when a game starts? Do you build some basic units for an early defense? Do you scout the area and capture a nearby gristmill to expand your territory, or do you build an additional farm around your starting gristmill to increase you resource gain? Depending on the situation, there isn’t always a single correct answer.

At their core, the campaign missions are usually just deathmatches against one or more enemy factions, but most missions make a valiant effort to mix things up and keep gameplay fresh. One mission might cause your resource to decay once they pass a certain threshold, forcing you spend money or lose it. In another, snowy level, your units to freeze to death over time while outside your territory. With only a handful of missions for each faction, the campaign isn’t too long, but the changes in gameplay keep things interesting and make each mission more distinct and memorable.

This difficulty isn’t helped by the fact that every map is procedurally generated, even in the campaign. Since the terrain changes and resources and enemies are in different places every time, Tooth and Tail forces players to rely on skill and reflexes rather than memorization

Like many games that boast simple mechanics, Tooth and Tail will have you breezing through challenges, wondering how it could ever get difficult one minute and clawing at your own face in frustration the next. By the way, considering how fast and brutal a battle in Tooth and Tail can be, and how quickly things can start to go badly, where the hell is the option on the pause menu to restart a mission?

In the end, I have to admit that I never managed to beat Tooth and Tail. I wanted to, I even delayed releasing this review a little to try and smash through the last quarter or so of the game, but I just couldn’t quite do it. Among my many personal rules for reviewing a game is “Play the game until you know that your opinion won’t change”. I usually complete every game I review, but sometimes a game is too difficult, frustrating or broken and finishing it in time is impossible. As long as the reviewer knows what they’re talking about, a review from someone who didn’t finish a game can be just as valuable as one from someone who did, since other people will inevitably fail to finish it for similar reasons. 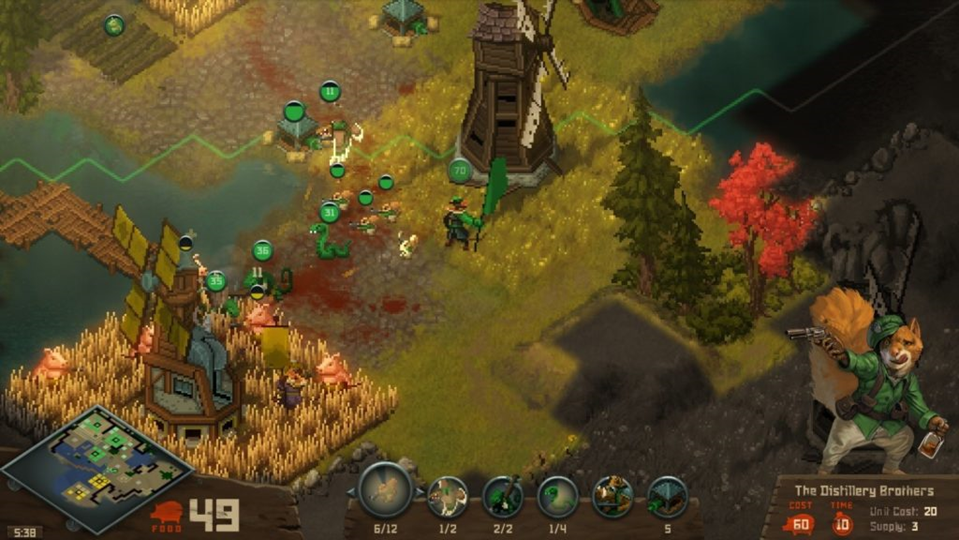 You would probably be unsurprised to learn that Tooth and Tail boasts a multiplayer mode; but what is surprising, especially for an RTS, is that it also supports two-player splitscreen multiplayer in addition to it’s online functionality.

Interestingly, the units in Tooth and Tail aren’t divided among its four factions. Instead, at the start of every multiplayer match, each player chooses six unit types to go into battle with. With a little over two dozen units in the game, yours and your opponents unit composition will likely be a little different every time.

This mixing and matching of units is interesting in a novel way, but it raises concerns over how balanced Tooth and Tail really is. Nothing glaringly unbalanced ever jumped out at me, but certain units seemed to be much more common and gave me much more trouble in multiplayer. The unit-poisoning Tooth Collectors can pretty much one-shot a lot of basic units and were always a massive pain to deal with, but the Volunteers, basically flying medics, hardly ever showed up in my enemy’s army, probably because most units in Tooth and Tail die so quickly that medics are mostly useless.

Imagine if Starcraft let you hand pick units like Tooth and Tail does. It might be fun for a while to rock up to an enemy base with an army of Zerg backed up by a squad of Medics, all cloaked under an Arbiter, but the game would be pretty much impossible to balance. It would also be nearly impossible to strategize with your opponents units in mind because you’d have no way of knowing what your opponents units even are until you engage them.

All that isn’t to say that Tooth and Tail’s multiplayer isn’t fun, it is, but it ends up being more of a curiosity that’s fun to mess around with for a little while than something to really get stuck into. 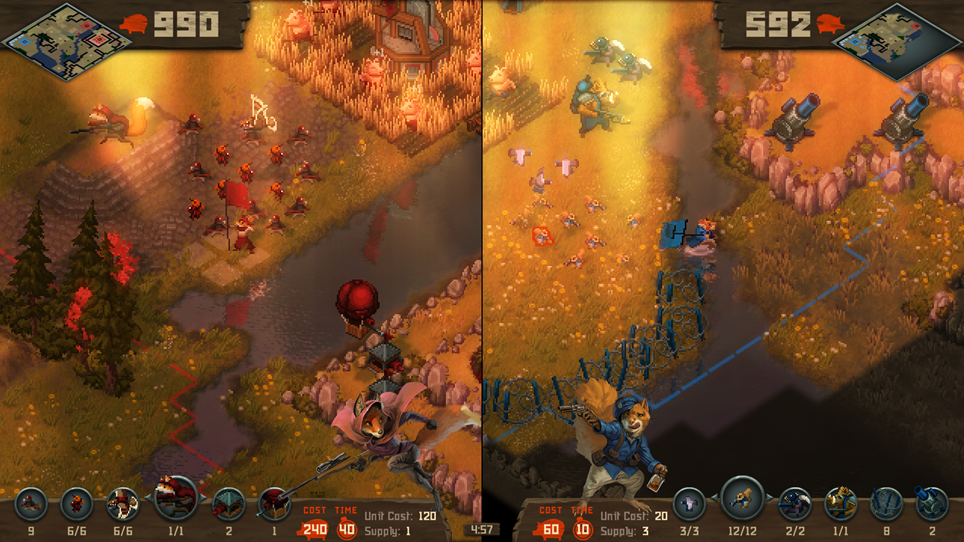 As much as I love Real Time Strategy games, I’m not terribly good at them, so Tooth and Tail may be a slightly better game than I’m giving it credit for. That said, the fact there’s no way to adjust the difficulty of the game’s campaign does mean that myself and probably a lot of other people won’t end up finishing it’s campaign. But the core gameplay of Tooth and Tail is solid and if multiplayer is your thing, you should get a fair bit mileage out of this competent, streamlined RTS.