“It’s Been An Honor”

Ever since its debut, Dishonored has been one of my favorite series’ of games out there. Good stealth games are rare enough, but Dishonored’s deep, compelling story, smart gameplay and beautiful, oil painting aesthetic let rival even the brilliant games that clearly inspired it like Bioshock and Deus Ex.
If certain rumors are to be believed, Dishonored: Death of the Outsider may be the last we see of the Dishonored series for a while. If that’s true, it’s difficult to imagine a game series going out on a higher note. 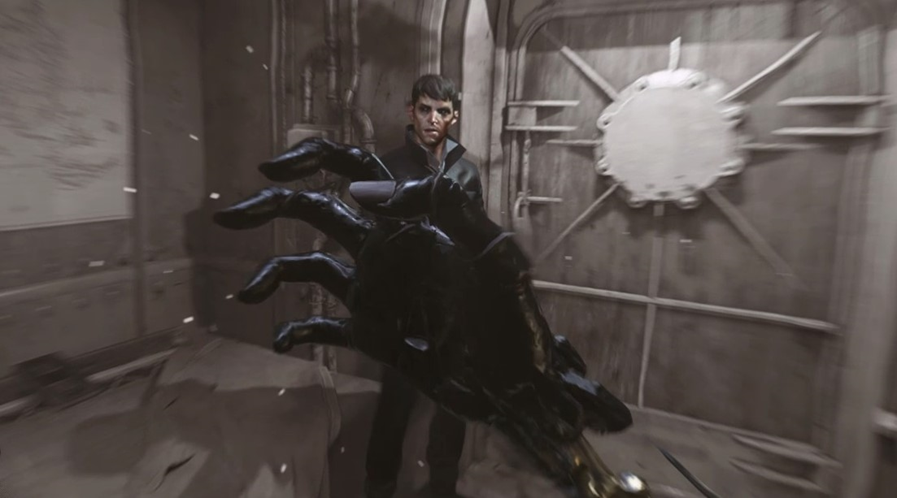 To anyone familiar with the Dishonored games, the idea of anyone killing the Outsider might seem a little ridiculous initially. For me at least, Death of the Outsider seemed to be threatening to be a “jumping the shark” moment for the series by it’s very existence. The Outsider occupies a very similar position in the Dishonored universe to Star Trek’s Q, an omnipotent being with immeasurable power who amuses himself by using his powers toy with lower lifeforms. Arkane manages to sell the story though, by providing us with several revelations about The Outsider that all make sense with the series’ established canon up to this point and by carefully laying out how one would go about killing a god within this specific context.

The story is well told, with Rosario Dawson putting in a solid performance once again as Billie, and yet the stakes somehow don’t feel as high this time around. Maybe because, unlike Dishonored 1 and 2, we’re not trying to save anyone, be it one little girl or an entire kingdom. Instead, Daud and Billie set out to kill the Outsider more or less because they don’t like him, which can’t help but feel a bit less exciting.

Death of the Outsider’s story also makes very few concessions for those who aren’t already familiar with the lore of the Dishonored universe up to this point, rarely stopping to explain any of the details of it’s world or who any of it’s characters are. As someone who’s played through each game multiple times, I was able to follow the story, but I have no idea how it would read to anyone who decides to jump into the series here.
Dishonored is a fairly popular franchise, but it’s not exactly Call of Duty and it may be a little presumptuous on Arkane’s part to assume that everyone who picks up Death of the Outsider already knows what’s going on. 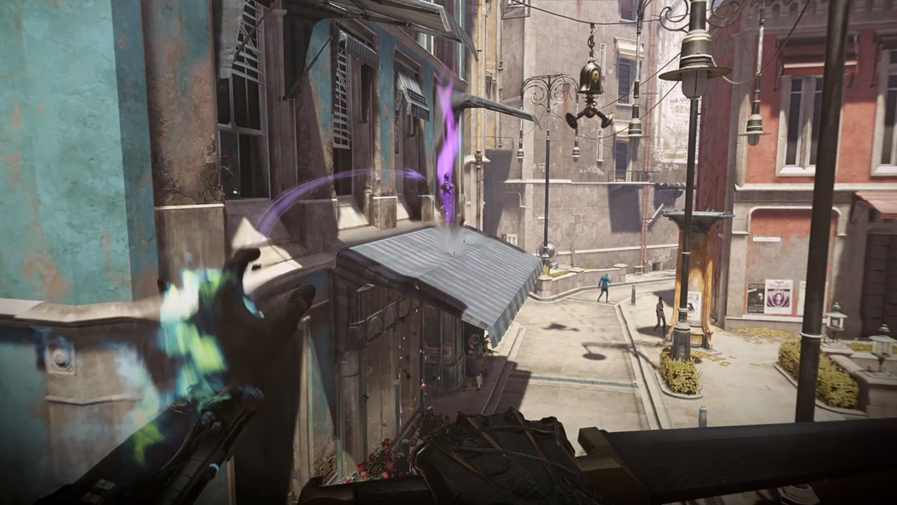 Fans of the Dishonored series won’t find any major changes in Death of the Outsider, though Billie’s new powers and a few new gadgets help keep things fresh. The Hook Mine snares enemies with grappling hooks and can be toggled between lethal and non-lethal. Your wrist-mounted pistol, the voltaic gun, can charge its shots and be upgraded to accept any small, thin object as ammo; like nails, pens and scalpels.

As an analogue to Corvo’s Blink or Emily’s Far Reach abilities, Billie can use Displace to create a beacon and then teleport to it at the press of a button. Her Semblance power lets her temporarily impersonate other people and Foresight allows Billie to leave her body and invisibly scout ahead, marking targets and planting beacons. The fact that you’re given all of your powers at once following the prologue does dull the sense of accomplishment somewhat since you don’t have to earn them, but given the length of the game it was probably the right call. Arkane is clearly more interested in making sure players have fun with the games powers rather than rigidly sticking to the usual Dishonored tradition of making players find runes to unlock them with.

Death of the Outsider uses the same well-designed crafting system from Dishonored 2, but doesn’t manage to use it to the same effect. The reason why is that the majority of the bone charms in the game seem to be either Black or Corrupt bone charms, neither of which can be broken down for their effects, which in turn significantly limits your crafting options.

Many powers and abilities have been streamlined somewhat. The Heart, a staple to the series, is no longer a tool you need to manually activate. Rather, it’s effects activate automatically when appropriate. When a bone charm is nearby for example, you’ll hear a heartbeat and feel a rumble in your controller. You can’t use the Heart to hear the deep dark secrets of other people anymore, but instead use it to overhear the thoughts of rats that inhabit the city, all written with a similar surreal, unnerving air as the Heart; using them like scouts to learn about nearby characters, dangers and secrets.

Death of the Outsider benefits from an improved mana system as well. Your entire mana bar now regenerates, granting a level of expedience to the game and eliminating the hesitance I would sometimes feel about using my powers in previous Dishonored games. But as a way of balancing out your functionally infinite mana, all of Billie’s powers are non-lethal. That isn’t to say that they can’t be used to kill people, but doing so requires a little more creativity and planning. Displace, true to it’s name, will explode anyone unlucky enough to be standing on your beacon when you warp to it, and you can kill or subdue enemies while using Semblance without breaking your disguise as long as no one sees you. Mostly though, your powers are there to help you to more easily transport your sword to your target’s neck. 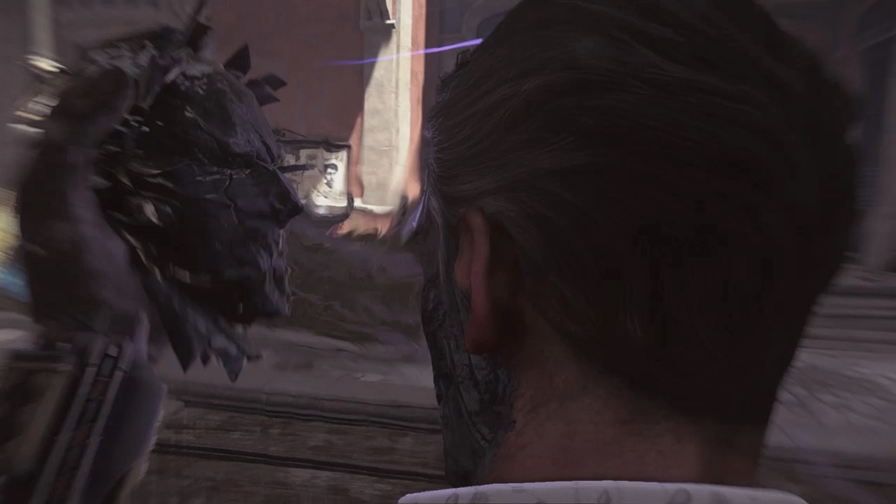 I can foresee this game catching some flak for its length, so it’s worth acknowledging that that yes, Death of the Outsider is definitely the shortest Dishonored game yet, though twelve hours is still a nice, robust length for a game. In fact, it’s relative brevity encouraged me to play through it multiple times in a couple of different ways; as opposed to other, much longer RPGs that I tell myself I’ll replay differently but never have the time to actually do.

In any case, I would never accuse Death of the Outsider of being “too short”. Most games that earn that dubious distinction do so not because of their length in hours, but because they don’t tell complete stories or have proper narrative arcs running through them. Death of the Outsider does tell a complete story, and while it’s true that there are only a handful of missions, each takes place in a wide-open sandbox packed with unique sights and takes multiple hours to complete; at least on your first playthrough.

Levels also have several side missions each in the form of Contracts. Found in each levels black market, a contract might task you with locating a missing person, stealing a valuable item or engaging in some light corporate espionage; among other things. I was pleasantly surprised to find that almost none of the contracts were simple assassinations, since there are more than enough opportunities to kill people in the game’s critical path. It would have been extremely easy to simply give us a list of targets to kill in each level and call it a day, but Arkane is clearly better than that and as a result, contracts add a high degree of variation to the gameplay.

Completing the game for the first time unlocks Original Game+ Mode, which at first I thought would allow you to play through Dishonored 2 (if you owned it) using Billie and her powers. An understandable mistake I think, as Death of the Outsider includes a link to purchase Dishonored 2 right on its main menu, though what we do get is almost as cool. Original Game+ lets you play through Death of the Outsider using a small grab bag of powers from throughout the Dishonored series in place of your usual powerset; including Domino and Daud’s time-stopping version of Blink from The Knife Of Dunwall. I had mistakenly assumed that Death of the Outsider would let you play as either Billie or Daud before release. While that turned out not to be the case, you might as well be playing as a different character in Original Game+. Having a completely different set of powers forces you to look at the world differently and made my second playthrough feel completely different from my first. 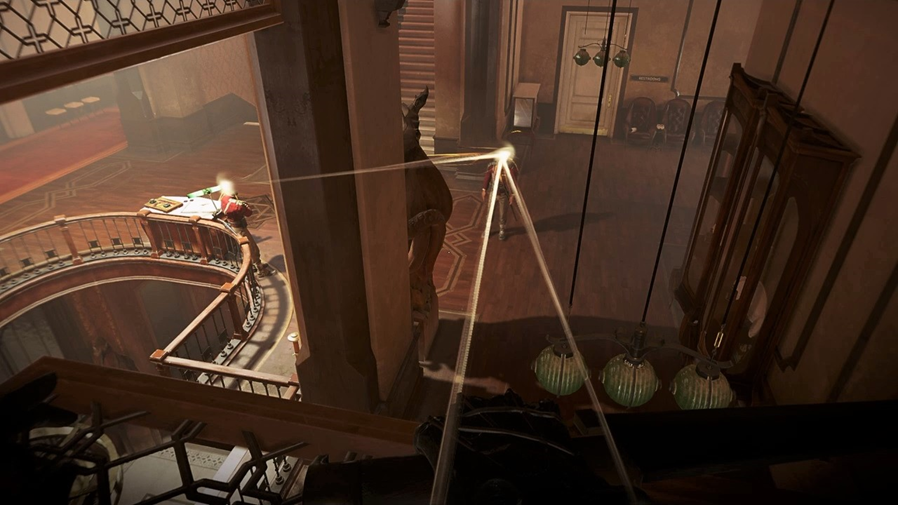 Following Death of the Outsider, one thing seems clear to me for the Dishonored series going forwards. If the franchise really does go to sleep for a while (and even if it doesn’t, but it should), it should be different when it comes back. Yes, Arkane came up with a winning formula for the Dishonored series, but it’s a winning formula that they’ve made three games with in five years. Without a bit of a break and a mixing up of that formula, the series runs the risk of becoming another series mercilessly wrung out for sequels to until everyone gets sick of it.

That’s all speculation though, and I think Arkane is better than that in any case. For now, Death of the Outsider is an excellent stealth-action game that may not be a good jumping in point, but brings the Dishonored series to a close, at least for a while, with style.