“Your Kung Fu Is Weak”

I have a strange relationship with most fighting games. I find most of them interesting to watch, but every time I try to get into one, my performance can best be equated to someone challenging themselves to drive stick without using their hands. As a result, I’ve really only been able to get into the more streamlined, non-standard fighting games like Super Smash Bros, For Honor and PlayStation All-Stars (Shut up, it’s great).

So when Absolver was announced, purporting to bridge the gap between Souls games, a subgenre I absolutely adore, and fighting games, I was immediately on board. And while I found a lot to like in Absolver, far more about it let me down. Absolver’s presentation and gameplay may make it worth checking out for the ardent Souls fan, but it’s held back significantly by technical issues and a serious lack of content. 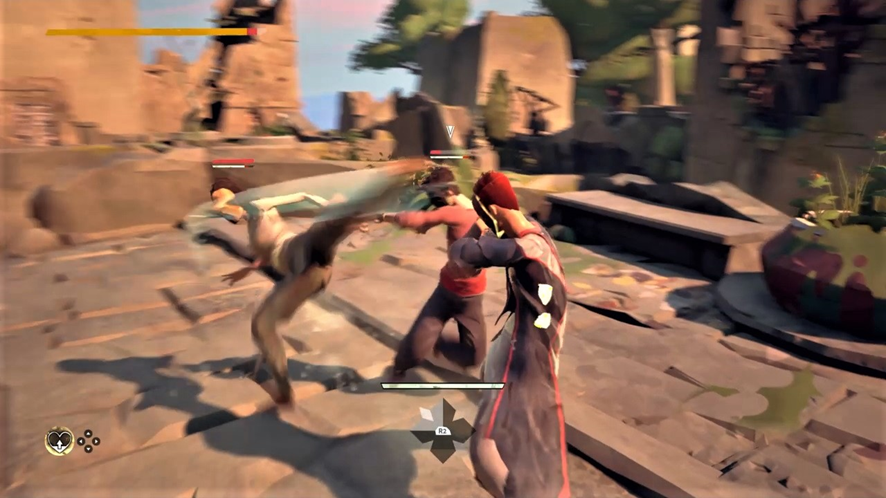 If that intro took a step toward scaring you away from Absolver, let me course correct a little by saying that what the game needs to get right, it mostly gets right. But it’s important to know what you’re getting into so you don’t go into a game with the wrong expectations.

In Absolver, you are a Prospect, a kind of warrior in training, sent to the Plains of Adal on a mission to prove your worth and be admitted into the ranks of the Absolvers, a sort of vaguely defined peacekeeping force. If you were hoping for any more in-depth story than that, you’re out of luck, but it works well as a framing device to set up the countless fights you’ll get into over the course of the game. Gameplay is what we’re all here for with Absolver anyway and luckily it’s gameplay that Sloclap absolutely nails.

Absolver’s gameplay could perhaps best be described as Mortal Kombat by way of Dark Souls, taking elements of fighting games such as move canceling, guard breaks and the memorization of complex button combinations, and combining them with the emphasis on positioning and stamina management of a Souls game. While combat starts off simple with only a few basic inputs (block, dodge, light and heavy attack), it quickly becomes complex with the introduction of stances. Your Prospect has a different set of combos in each of the four stances, and each move in that combo can be swapped out anytime between fights, similar to the combat systems in Remember Me or God Hand. Though you start off with only a small pool of moves, you’ll quickly start learning more from fighting enemies and other players, which provides a nice, organic sense of character progression. You can also enter combat schools created by other players or NPCs to gain access to their combat decks and learn their moves.

Once you’ve learned a significant number of moves, creating your own combat deck almost feels like another game in itself. Crafting you own combos, you’ll need to keep in mind the speed, reach and power of each move, how different moves work together and which stance a move will leave you in if you end the combo there.
It’s that cycle of fighting, learning new moves and constant self-improvement that Absolver primarily relies on to keep players motivated, as the game’s critical path leaves a lot to be desired.

After a brief tutorial, you’re set loose and given a number of targets to find and eliminate throughout the game’s smallish world. Once you’ve eliminated them all, including a boss in both of the worlds primary areas, you’ll unlock the third, final boss atop the tower of Adal to defeat and complete your mission.

If that sounds like a spoiler, it’s not. Absolver expects you to go through the game multiple times, challenging each boss over and over again. Though the boss fights remain the same every time, the bosses themselves will remember having fought you, triggering new cutscenes each time and granting new rewards with each victory. It is interesting in a novel way that your mission is couched in the context of sparring matches against other warriors belonging to the same faction that you do rather than the standard legion of invading enemies of most other games.

The problem with Absolver’s critical path is with what it doesn’t include rather than what it does. There are no side quests, no real dialogue with any of the games few NPCs and no reason to explore in general other than to track down your targets and to find the handful of hidden items scattered throughout the world.

Upon completing the game the first time, a sign might as well come up reading “The real Absolver starts here”. It’s at this point that you’ll have to really start getting stuck into the game’s online functionality if you haven’t already. Absolver ties together it’s single-player and multiplayer modes by requiring you to rank up in the Combat Trials, the game’s dedicated Player-vs-Player mode, before allowing you to challenge any of it’s bosses again. Though alluded to earlier, it bears repeating to say that you’d better really love Absolver’s combat, because it’s at this point that you’re going to settle into literal hours of pretty much nothing but one PVP match after another. 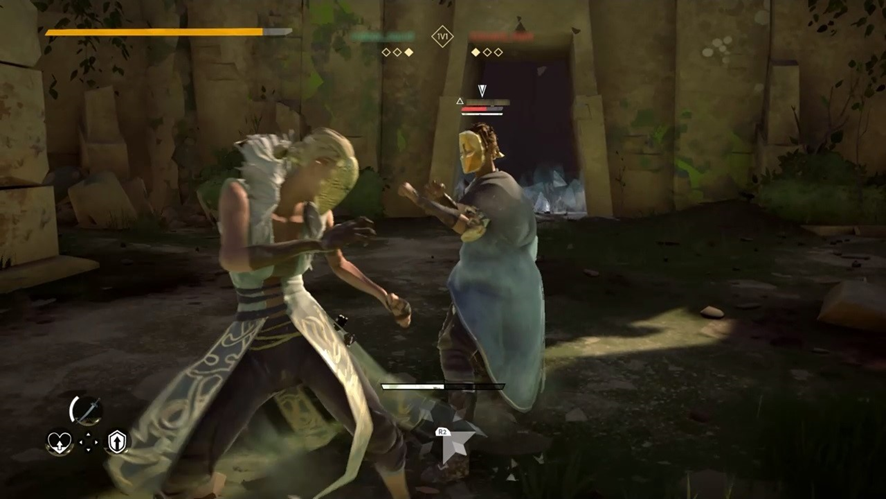 Structurally, Absolver is a small-scale MMO in the same vein as Diablo, meaning that you’ll frequently run into other players on their own quest. I was worried at first that this would lead to Absolver’s servers swiftly becoming an inhospitable cesspool full of jerks, such as what happened to GTA Online, which saw me gunned down upwards of a dozen times while trying to walk down the street to visit a store before joining a mission with some friends.

Luckily and with some pride, I’m happy to report that Absolver’s player base generally consists of a better class of gamer than the griefing, player hunting douche-canoes that populate a lot of MMOs; especially surprising when you consider that player-vs-player fights can break out anywhere and at any time. This is speculation, but I would attribute this largely to the fact that a lot of Absolver players are likely fans of Darks Souls and other such games, and veterans of Souls games typically understand that teamwork is frequently the key to victory.

Unfortunately, a player base with a better-than-average ratio of people who were raised properly doesn’t mean much if there’s no reason to play together with anyone in the first place, and there simply isn’t much to do in co-op right now. In fact, It was when I started looking up how to get into the co-op missions I’d heard about that I began to discover how unfinished Absolver really is.

Let me just get it out of the way quickly, there are no co-op missions. Sloclap has stated that there will be co-op missions added to the game…someday…maybe, but for now the utility of co-op is pretty much limited to getting through the few areas in the world with a higher than average enemy density. And in case you’re wondering if you can co-op bosses, sorry; boss fights are single-player only.

This lack of features extends across the entire game. In the Combat Trials menu, I noticed that the only available mode right off the bat was the option for one-on-one duels, and I assumed that more modes would unlock as I played. But no, those features aren’t locked so much as “In Development”. This means that both the co-op and competitive modes of this predominantly multiplayer game pretty bare bones at the moment.

The longer I played, the more features I discovered that should have come standard in any game being sold as a finished product that were strangely absent from Absolver, such as no fast-travel between checkpoints or any way to sell, trade or even drop items you don’t want, meaning your inventory, which is at least thankfully divided into categories, will slowly get cluttered up with gear you’re never going to use.

Of course, all of this is assuming that you can actually get online at all. In the course of playing this game to review, there have been several instances where I’ve booted up my PS4, gone into Absolver and have found myself unable to connect to the game’s servers. When I could connect, I’d still encounter the odd lag spike that caused enemies to warp in and out of range of my strikes or for the game to fail to register my inputs; particularly infuriating in a fighting game, where your movements and actions need to be incredibly precise.
I would be remiss if I didn’t also mention that a few days into playing Absolver, the game seemed to spontaneously forget that I was in a combat school, completely erasing at least two dozen duels worth of progress, and probably more.

Absolver is a prime example of why delaying games is sometimes necessary and usually even a good thing. Some gamers might cry and whine and threaten when a game they’re looking forward to gets delayed, but games like Absolver are what happens when a game doesn’t get delayed. 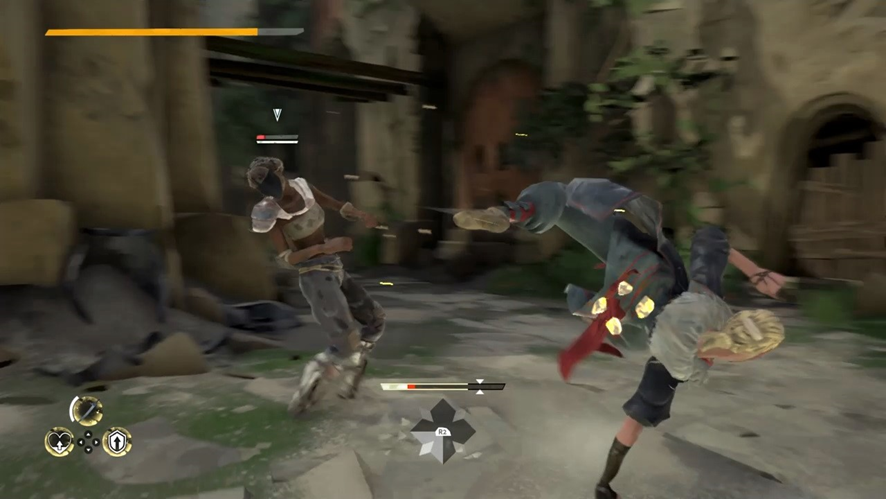 I went into Absolver completely prepared to love it, but I ultimately came away feeling like I’d been duped into buying an early access game. To be fair, Sloclap has already acknowledged a lot of these issues and missing features and promised to correct them, but no amount of promises make up for the fact that the game shouldn’t have shipped like this in the first place. The fact that it was makes me incredibly dubious that all of the fixes it needs are actually going to happen, but even if they do, a reviewer must review what’s in front of them. It would be incredibly dishonest to review a game as if all of its promised fixes had already been made. The fact is that Absolver simply wasn’t ready for prime time when it was pushed out.

That doesn’t mean Absolver is a bad game. It presents itself well, and I had quite a lot of fun with its genuinely great combat, going through its main quest multiple times, participating in countless duels and making my character my own. I sincerely hope that Sloclap ends up adding all of the features to the game that they’ve promised, because I really want to love it, but right now, Absolver just doesn’t live up to its potential and I would recommend it only to those have run out of any other Souls or fighting games they might be interested in.