Hellblade: Senua’s Sacrifice is a good game for a lot of reasons, but it’s also an immensely important game. It addresses severe mental illness, a topic rarely covered in any form of media, let alone the fairly young medium of video games, and attempts to evenhandedly demonstrate how real sufferers of a lot of these afflictions perceive the world. At the same time, Hellblade delivers an intense action game with satisfying, nuanced combat and clever puzzles throughout a riveting trip through its beautiful and terrifying world. 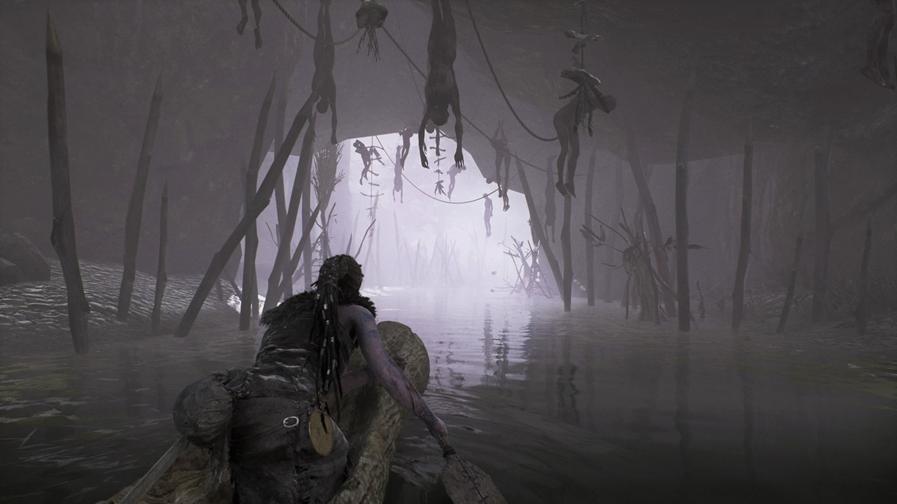 If you aren’t the kind of person who cares about stories in games, Hellblade is most certainly not the game for you, sorry. Everything in the game, from the storytelling to the atmosphere to one particularly divisive mechanic that we’ll get to later, is designed in service to the story of Senua, a Pictish warrior who journeys into Viking territory on a quest to save her lovers soul from Hela, ruler of the Norse underworld.

Part of what makes Hellblade so unique is its focus on immersion. Every aspect of its design is geared towards making you see the world the way Senua’s sees it. Senua suffers from a severe form of psychosis, as well as complex feelings of guilt from having survived the traumatic event that sets the story in motion. Ninja Theory put a ton of work into representing Senua’s afflictions as realistically as possible, working with people who actually suffer from flashbacks, visions and voice hearing. That latter condition is brought across with particular skill. The game uses binaural sound, a fancy way of saying that Hellblade’s sound was specifically designed for a pair of headphones, to put the voices inside Senua’s head into yours.

If the story has one issue, it’s that it’s sometimes paced less like a game and more like a book or a movie, by which I mean you shouldn’t go in expecting, for example, an enemy encounter in every other room followed by a cutscene at the end of each area. The story takes priority over everything else in Hellblade, which means that when it’s time for a cutscene, there’ll be a cutscene. When it’s time for some quiet, contemplative exploration, that’s what happens. And when it’s time for an awesome knock-down, drag-out fight with strange, quasi-supernatural creatures that may or may not actually be there, that’ll happen too. Though it’s clear that a lot of what’s happening to Senua in in her head, exactly how much is thankfully left up to interpretation. 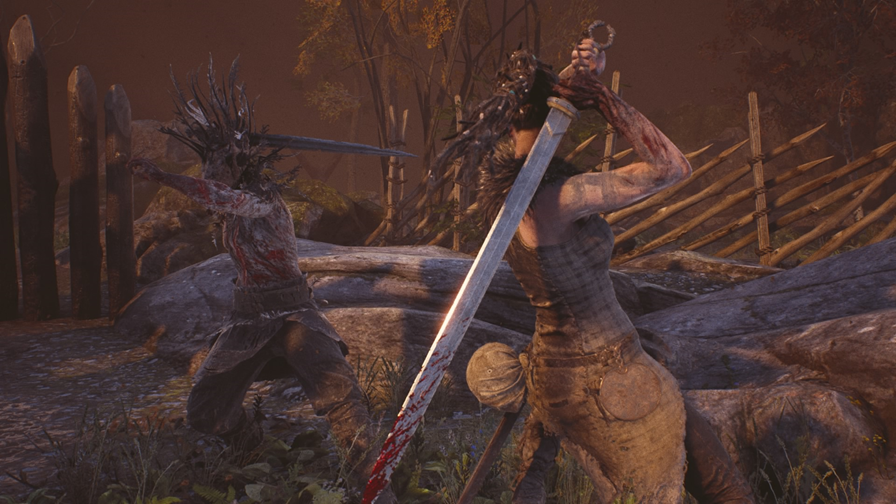 I don’t usually spend very long talking about how good a game’s graphics are, I’ve always held that realistic textures and ridiculous polygon counts aren’t required to tell compelling stories and make me feel for a game’s characters. If they were, then It the novel wouldn’t be ten times scarier than the movie and Thomas Was Alone wouldn’t be ten times more moving than anything Quantic Dream has ever done, but they both are.

That said, the environments in Hellblade are staggering. The game’s textures might not be the very best around, but good use of lighting, vibrant colors and Ninja Theory’s notoriously good art direction make the world of Hellblade seem like someone took one of those Unreal tech demo environments and actually put a game into it. The world isn’t huge, but the game makes good use of space with smart level design throughout the landscape, dominated by the same massive, foreboding structure that serves as your ultimate goal. Reminiscent of Apocalypse Now or Valhalla Rising, Hellblade’s world is beautiful, even in its desolation and gives the game an air of ominous surreality that, like the rest of Hellblade, effectively blurs the lines between what’s actually going on and what Senua believes is happening.

It cannot be overstated how good of a job the puzzles do at representing a complex…well, complex, in an interesting, easy-to-understand way while still being good, well-designed puzzles.
Most of the puzzles revolve around finding Celtic runes from natural shapes in the environment by focusing on them from certain angles, and though that sounds like it might get really old after a while, the game mixes things up nearly every time, often by making you use your wits to get to the runes in the first place. The puzzles also help to vary the gameplay, which would otherwise just be one combat encounter after another.
Sufferers of Obsessive Compulsive Disorder and certain other conditions sometimes have the need to perform certain specific rituals before anything else can be done and Hellblade’s puzzles portray that compulsion in a subtle and clever way; players must internalize and obey Senua’s internal logic in order to progress. Perhaps even more so when Senua is called upon to “Fix” certain doors or bridges by viewing their shattered pieces at the correct angle to bring them back together. I never thought that puzzles could help me to get into a game’s story, even in better-written games like Portal, the specific act of solving puzzles is usually fairly mechanical, but the game’s laser-focus on immersion really got me to sympathize with Senua’s plight after a while. 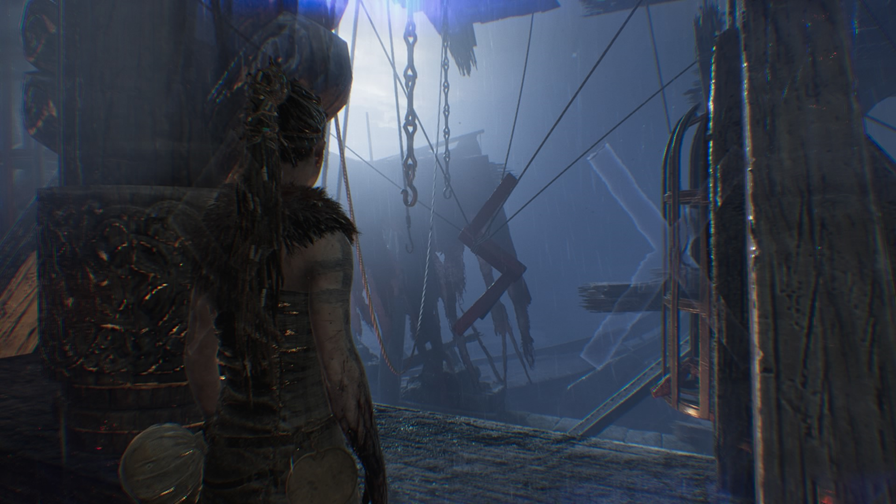 Like Suckerpunch or Platinum Games, Ninja Theory is one of those eternally underrated studios that may never get the respect it deserves. If you are a fan of their previous efforts, then you may have already guessed that Hellblade’s combat is stellar, and you’d be right. Hellblade continues Ninja Theory’s tradition of intense, engaging combat encounters that nonetheless occasionally seem to go on a little too long. One aspect of Hellblade that gave me pause however is what I’m going to call the Rot system. Introduced after the prologue and represented by a kind of creeping infection on Senua’s right arm, the Rot system essentially imposes a limit on how many times you can die in a single playthrough. Each time you fall in battle, the dark rot spreads a little up Senua’s arm. Die too many times and that’s it, you get to start the entire game again.

Now look, I know that we all live in the age of the internet and that half of you are tweeting right now about all of the pictures of your food that you’ve posted to Instagram while loitering on my lawn, but for god’s sake do not look up how many lives you have. Hellblade is one of those games like Gone Home, where spoiling the story for yourself to any significant degree renders playing through it yourself largely moot, and this might be the first game I’ve ever seen where learning the details of a certain game mechanic could be equally ruinous to your experience.
The tension you feel knowing that your next death could be your last is a huge part of the game. Thanks to the game’s default auto-difficulty setting that changes how hard the game is depending on how well you’re doing at it, you probably won’t die more than a few times anyways.

Pitting you against single enemies or small groups, fights in Hellblade are dirty, brutal, personal-feeling affairs that, owing in part to the Rot system, don’t feel glorious or “fun” in the same way that dominating your enemies in God Of War does. That isn’t to say that combat isn’t fun, it most certainly is, but with the Rot system in the back of your mind, you’ll generally be more focused on getting Senua out of there alive rather than trying to pull off some awesome combos.

It’s for this reason that I find myself in favor of the Rot system. It may not be the most elegant game mechanic, but it inexorably ties together the motivations of the player and the protagonist and more often than not served it’s intended function, getting me invested in Senua’s mission and encouraging me to fight harder and better when I was on the ropes, usually leading to victory. In those moments I was Senua, in the same way that I was Caitlyn in Gone Home or Lee by the end of Telltale’s The Walking Dead. For the record, despite my fair share of deaths, I made it through my first playthrough of Hellblade without having to restart, though judging by the rot on Senua’s arm by the end, failure may not have been far away.

There are no complex button combinations or magical powers in Hellblade, but the game demands that you more or less master what abilities you do have if you plan on making it to the end. While definitely not the deepest combat system around compared to Ninja Theory’s other work, combat is fast and fluid, leaving you to discover the intricacies of its combat system beyond the basic moves. Like everything else in Hellblade, the straightforwardness of the combat only aids the atmosphere of the game. Senua doesn’t cartwheel around the battlefield, doing flashy weapon flourishes and striking poses like Dante or Bayonetta. If she did, it would only detract from the tone the game is going for. On the same topic, if you’re a veteran of DMC, God Of War or Bayonetta you might find Hellblade a little unchallenging, at least until the last quarter or so of the game, when the game started throwing so many waves of enemies at me that I occasionally began to wonder if I was in a supposed-to-lose fight.

The gameplay also sags a bit in the middle with a really long stretch of puzzles, no combat and a mercifully short but incredibly ill-advised instant-fail stealth section that, coupled with the Rot system, might prove cataclysmic to a players progress, as your chances of success are pretty much 50/50 even if you know exactly what to do.

I have a hard time declaring any game a “Must Play”, as there are always caveats to any recommendation, usually of the “If you’re into this sort of thing” variety; with the Rot system and occasionally strange pacing, Hellblade is no exception. What’s more, for such a story-heavy experience, it also demands that you be pretty damn good at video games if you want to get through it.

But as I said at the beginning, Hellblade is an important game, and like Killer7 or the Katamari games, it’s few quirks are worth putting up with for an experience this unique. The singularly immersive story hooked me and the smooth combat and solid puzzles kept me engaged throughout. More importantly Ninja Theory has used the uniquely transportive medium of video games to give us quite possibly the best representation yet of people with psychosis and similarly unquiet minds.