As much as I love Souls games (and I do), I’ve wondered for some time why even the numerous Dark Souls imitators have never broken out of the “Dark Fantasy” mould. There would seem to be a lot of things you could do with a Souls game, both aesthetically and mechanically, simply by getting away from swords and sorcery, but for most developers, “Souls game” simply means “Fantasy”. Why?

Well, in the case of Souls games, Deck 13 is the first to learn that lesson with their release of The Surge, a pretty good little Souls game in it’s own right that despite some problems, is probably the most innovative and interesting Souls game since Bloodborne.

No, it’s not as good as Bloodborne, but it is good. 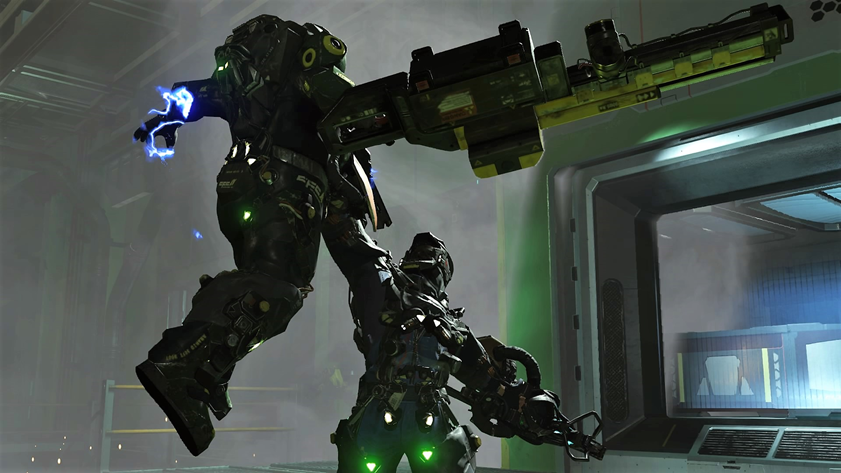 A potential issue for Souls fans right off the bat is that The Surge doesn’t really have a story. It has a plot, albeit a fairly predictable one, that slowly gets revealed over the course of the game, but it doesn’t have a proper narrative or much in the way of characters.

Despite my love for the deep lore of From Software’s Souls games, I actually don’t count this as a problem in The Surge and the reason why is that neither Dark Souls or Bloodborne use their stories to drive the gameplay. The stories of those games are there if you want them, and ultimately make for better overall packages, but games like Nioh, Let It Die and the upcoming Absolver have demonstrated that the Souls formula can be boiled down to one of pure gameplay and be just as satisfying (and yes, I know that Nioh has a story, but it’s nonsense).

Likewise, The Surge’s protagonist Warren arrives at a facility run by CREO, a company whose goals and motivations beyond “Healing the planet” are completely ambiguous and not what we’re here for anyways. After enduring a sequence that might as well have been titled “How not to install a robotic exoskeleton”, Warren wakes up in the aftermath of some cataclysmic event that has left huge sections of the facility destroyed or inoperative and turned most of the industrial robots sentient and homicidal.

The bulk of the enemies are actually other humans, seemingly piloted by the exoskeletons they wear after having their brains fried by the titular surge. I quite like how the game’s primary enemy type all use the same weapons and armor that you can, as it lets you tell at a glance what an enemy’s capabilities are and moreover, lets you feel like a badass for being able to beat several at once.

The developers also did as good a job as can reasonably be expected in making the various robotic enemies seem like they would have had a proper industrial use before they started trying to kill people. The Smelting Robot for instance is basically just a robotic assembly line arm with a blowtorch on the end, mounted on a three-wheeled base. If nothing else, it easily does a better job than Dead Space ever did in making its enemies and weapons seem more like improvised tools or modified pieces of machinery; rather than trying to convince us that, no really, the gun that fires ricocheting circular saw blades was totally a tool that people used day-to-day…for all of the wood…that was apparently so hard to cut that it requires trick shots…in space. 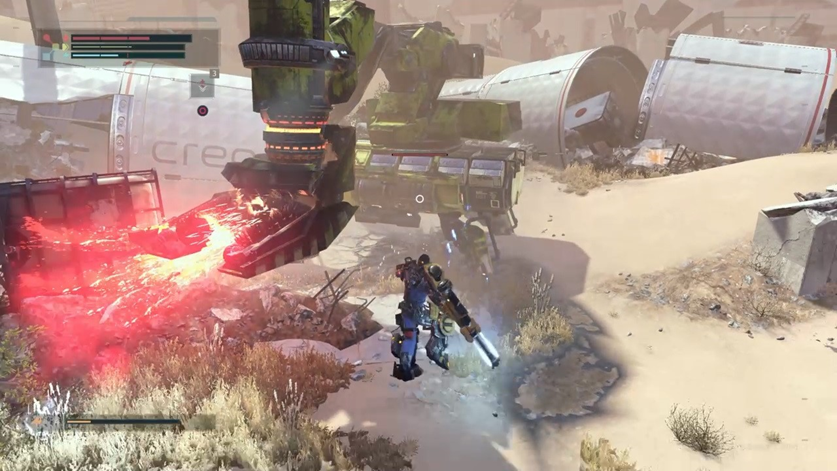 Deck 13’s last game was Lords Of The Fallen and a lot of that game can be seen in The Surge. The developers have done an admirable job of taking what they learned from a previous project and using to make their next one even better. Gameplay in The Surge does feel very similar to Lords Of The Fallen in terms of how your character moves and interacts with the world, but every element has been polished until it shines.

One of the biggest problems with Lords Of The Fallen was that no matter how you developed your character, the game felt exactly the same to play. Whether you went with a warrior, rogue or mage build, protagonist Harkin was still a giant, lumbering brute with ridiculous World Of Warcraft-esque proportions and having him use anything other than the largest available weapon always felt like you were playing the game wrong.

By contrast, gameplay in The Surge feels smooth and flexible with an appreciable difference between fast and slow builds. Combat is most reminiscent of Bloodborne, with a similar level of speed and focus on proactively creating openings by maneuvering around enemies rather than staying in one spot. There is a block button, but I constantly forgot it was there and on the few occasions that I tried to use it I ended up getting pounded into the dirt. Blocking in The Surge feels like blocking with a weapon in Dark Souls, the worst possible defensive measure and useful only if you absolutely cannot get out of the way of an attack.

The Surge incorporates an energy system as an analog to spellcasting. Every hit you land will charge your energy bar, allowing different interchangeable powers and abilities to be used once you reach certain thresholds. The bar begins to drain after a few seconds of inactivity, so in the same way that Bloodborne’s regain system pushed players to adopt a more offensive playstyle, the energy system encourages player to get in there and build up that bar to access their various powers and abilities.

The game seems to favor combat against single opponents or very small groups and whether this was a conscious decision or not, it ends up benefitting the game greatly, as fighting individual enemies is a more complicated business in The Surge than in other Souls games.

Once you lock on to an enemy, your camera control becomes a targeting system, allowing your to precisely attack your enemies arms, legs, body or head. This lets you decide whether to go for an unarmored part of an enemy’s body for a quick kill, or to try to break off a particular piece of gear to use it yourself later. Not that it’s a difficult bar to clear, but The Surge has hands-down the best crafting system of any Souls game. Breaking off a new piece of gear will give you it’s schematic, and any gear you break will give you upgrade materials specific to that limb. So crafting materials in The Surge can be used in multiple ways, to create a new piece of gear of improve an existing one. There’s a good variety of gear to be found throughout the game and I appreciated how holding down a button on a piece of gear will equip the entire set, as you get a special bonus for wearing a full set of gear and having to change them out individually would have gotten really tedious after a while.

This system also has the added effect of making crafting actively fun. Need to upgrade your visor? Don’t just stand there like an idiot mixing boring crafting materials together, get out there and rip off some heads! Much like Horizon: Zero Dawn, The Surge integrates elements of it’s crafting system into its combat, and with similarly positive results.

The bosses of Lords Of The Fallen were a mixed bag. They weren’t terribly visually creative, with that same generic fantasy aesthetic that permeated the entire game, but an effort was always made to do something mechanically interesting with each boss. LOTF was actually the first Souls game to properly introduce phases into boss fights, with noticeable changes midway through each fight. The game’s biggest problem, however, was that whenever you encountered a boss, the game’s difficulty curve turned into a wall.

The Surge shows improvement in this area as well. Each boss is well designed, both visually and mechanically, much more so then Lords Of The Fallen or even, dare I say it, a lot of Dark Souls bosses. Almost all of them have phases that change the fight in interesting ways, like a boss that starts flying once you cut it’s legs off. The developers have also done a much better job of making the difficulty of a given boss fall more in line with the difficulty of the preceding level, and while I’ve noticed that the more Souls games I play, the more challenging it becomes to gage their how hard they are, I’d say that The Surge lands somewhere around Dark Souls 2 in terms of overall difficulty; hard, but not too hard.

One issue that Deck 13 hasn’t managed to lick since LOTF is it’s problem with level design. The Surge features linear progression from one area to the next, which would be fine, but each level only has a single Safe Zone, the game’s equivalent to bonfires, and this ends up significantly impairing the game’s level design.

For comparison, Dark Souls has a gigantic, sprawling world with areas that connect to multiple other areas each and paths that loop back in on themselves to constantly open up new shortcuts as the player explores the world. The Surge tries to do the same, but with the every path having to lead back to the same Safe Zone, level design frequently becomes a mess. At least once per area I would complete a loop back to the Safe Zone and be left thinking “Ok, what now?”, and was left to wander around the level, sometimes for quite a while, before figuring out where I was meant to go. This is further exacerbated by the fact that when you die and lose your souls (they’re called Scrap in The Surge, but we know the truth, don’t we?), they expire after a finite amount of time. The game does show you how far away they are to help you get them back, but they simply didn’t need to time out in the first place. 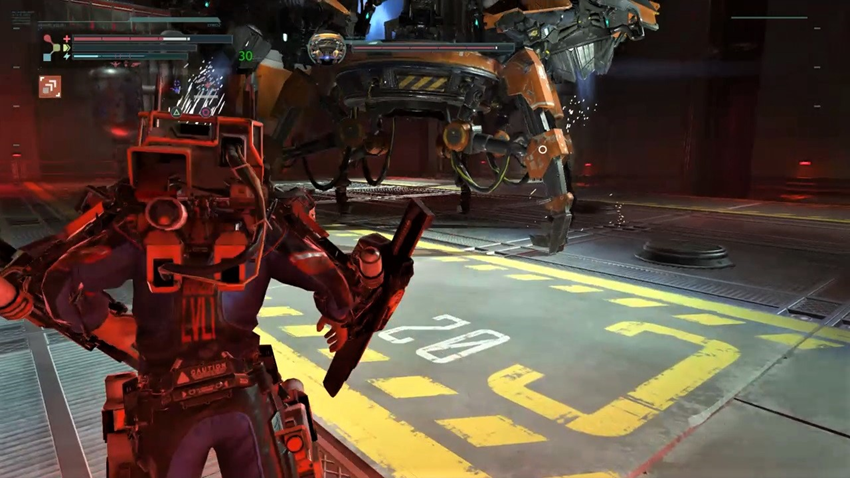 With only a handful of bosses and environments, The Surge is probably the least substantial Souls game out there. Insubstantial doesn’t mean bad however, and though you might consider waiting for a sale to pick it up, fans of Souls games should find a lot to like in The Surge. Gameplay is more than competent and the individual limb targeting system adds a welcome extra layer of strategy to the combat. And by tying the gathering of crafting materials directly into it’s combat The Surge is one of the only games I’ve ever played to incorporate a level of fun into it’s crafting system.

The occasionally wonky level design of The Surge did sometimes bring the experience down as I attempted to remember exactly which way to go to get my souls back before they expired, but it ultimately didn’t bother me too much. The game’s nonexistent story wasn’t a problem for me and I suspect that it won’t be a problem for anyone else as long as they know that going in; as long as you’ve got a good supply of podcasts anyways.