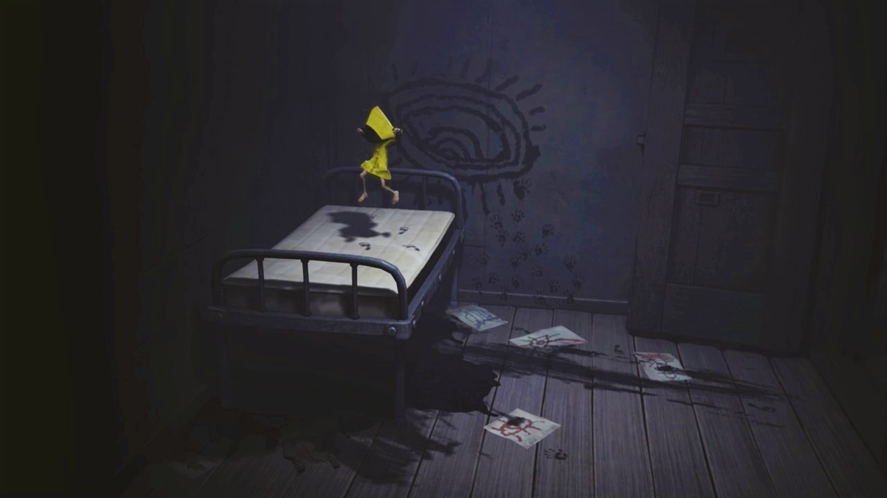 Comparisons to other 2D horror games like Limbo, Inside or even Little Big Planet are inevitable with Little Nightmares, and while it can be argued that the game wouldn’t exist in it’s present form if not for those games, Little Nightmares distinguishes itself from it’s contemporaries in several major ways.

If you’ve seen any trailers or screenshots for Little Nightmares, you already know that the game looks great. Clearly drawing from stop-motion works like The Nightmare Before Christmas and Coraline, the games’ environments and creatures look as if they’ve been crafted from real-world materials. The terms stop-motion or claymation don’t seem quite right for video games though, so let’s call it Clay & Cloth. Little Nightmares isn’t the first game to do that of course, Yoshi’s Wooly World, Unravel and indeed Little Big Planet all experiment with a similar art style, but Little Nightmares is the first game that I know of to apply that aesthetic to a horror game.

What makes Little Nightmares really stand out from its 2.5D contemporaries, even more so than it’s art style, are it’s controls. Little Nightmares features full 3D navigation through its environments and it feels incredibly freeing to be able to explore the entirety of the areas you find yourself in. The controls are flexible enough to feel smooth and intuitive however you need to use them, whether you’re ponderously exploring an area, engaging in some light platforming or scampering up on top of an object, out of reach of a monster.

Tarsier Studios did a fantastic job of making every part of The Maw, the setting of Little Nightmares, feel like somewhere you don’t belong. Most of it seems designed for beings much larger than you are, a constant reminder that you are a small, helpless creature in this giant, bizarre world. In the quieter moments of creeping through The Maw, you’ll come across a number of puzzles that provide a welcome change of pace to the gameplay and an opportunity to let the tension off.
Though the puzzles aren’t particularly difficult, they are cleverly designed and satisfying to solve.

The character design in Little Nightmares is excellent, with strange not-quite-human enemies that range from weird to grotesque. Even the relatively simple design of protagonist Six is subtlety clever, her plain yellow raincoat and bare feet granting her an air of defenselessness in the face of the terrors of her world. Real, palpable tension while trying to avoid a monster gave way to genuine horror whenever I was spotted and broke into a terrified sprint for safety. 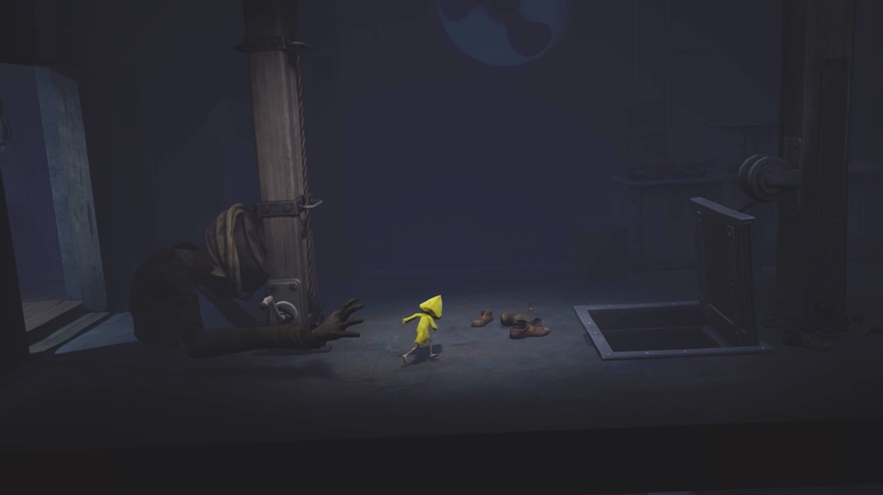 If the gameplay of Little Nightmares makes one misstep, it’s in what I’m going to call “hunger sequences”. Every once in a while, Six becomes crippled with hunger and will have to find food before you can continue. On paper this could have been interesting and at the very least the game doesn’t make the mistake of putting in a hunger meter or any other such mechanic; but the implementation is such that these sequences don’t serve any purpose at all. You never have to search for food or complete any kind of puzzle to get at it, the food in question is always right in front of you, in the direction you were already heading.

Hunger sequences all take place at predetermined points, essentially functioning as set pieces in the story, but seem to be entirely for their own sake. You don’t get any kind of new abilities from eating, you can’t elect not to eat things and with one exception, these scenes have no impact whatsoever on the story. Based on the fact that the game was once called Hunger, I would be willing to bet that at some point those sequences were meant to be a larger part of the game with more mechanics or gameplay implications. But at some point the focus of Little Nightmares shifted, leaving them nothing more than an odd, vestigial feature. 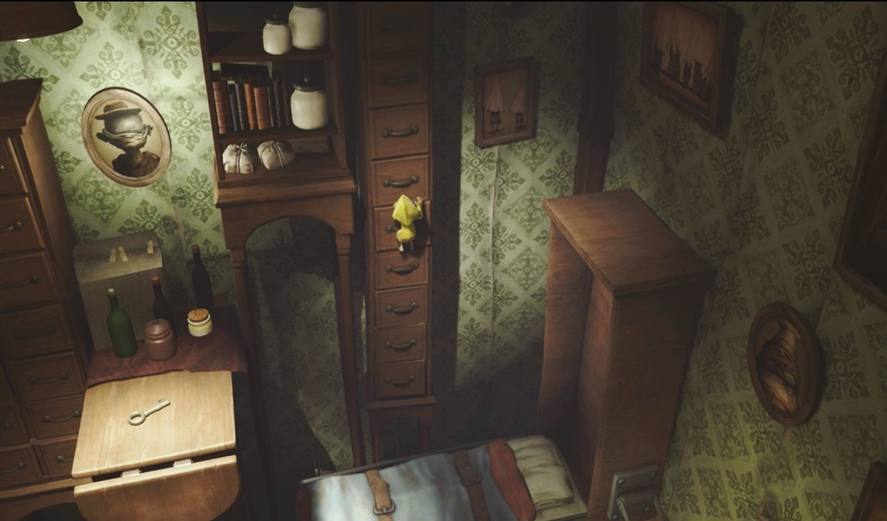 If you’re wondering why we’re three quarters of the way through this review and haven’t gotten to the games’ story yet, then congratulations, you’re in the same headspace I was in while playing the game.

Little Nightmares tries for the same kind of environmental storytelling used in Silent Hill or Inside. While I might not have been able to entirely figure out the story of Inside and I would argue that Inside’s story was a little too vague for it’s own good, I could at least state definitively that there was a story going on. Little Nightmares on the other hand seems to sometimes have pretensions of story and there are a very small handful of what I would hesitantly call “story moments”, but if there is a tale being told in Little Nightmares then good luck trying to figure it out, because it’s even more vague than Inside or even Limbo. By the time I reached about the halfway point in the game it was clear that the developers were more interested in crafting creepy areas to explore than telling me a story.

Not that there’s anything inherently wrong with that, but if Inside is like a horror movie, Little Nightmares is more like a trip through a haunted house; a very scary and well put together haunted house to be sure, but anyone hoping for a finely crafted narrative to go along with the strange, surreal world of Little Nightmares will likely come away disappointed.

The games’ length might also be a problem for some. Clocking in at around seven hours for my first playthrough, it isn’t actually all that short, but it feels short because there’s no narrative arc running through the game. Up until about five minutes before the end, I couldn’t tell if I was about to finish the game or if I still had several hours to go, and that’s a problem. Going back to the haunted house analogy, the game is a trip through an oppressive horror environment with one scare after another until suddenly…that’s it.

My first thought upon finishing the game was that Little Nightmares is crying out for a sequel, but that’s wrong. No game needs multiple iterations to tell a complete story. Even the Mass Effect games told complete stories within the grander story of it’s trilogy. No, what Little Nightmares needs at this point is a directors cut, with a maybe one or two more areas and a few more story moments to give us a clearer picture of what’s going on. 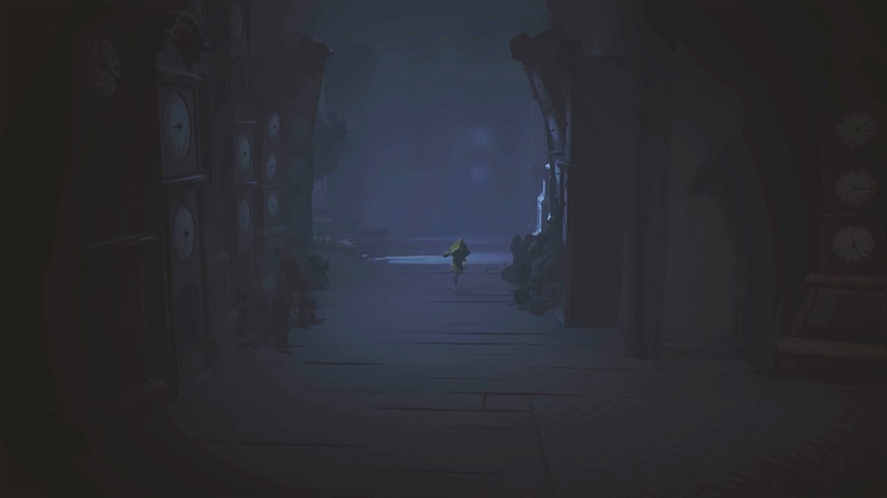 Little Nightmares’ lack of story and out-of-the-blue ending may leave a bad taste in the mouths of some players, which is too bad, because Tarsier Studios absolutely nails nearly everything else. Gameplay is flexible enough to make Six feel capable while still being incredibly vulnerable, and the world of The Maw is beautiful and foreboding, and crucially only really tries to scare you when its monsters get involved rather than running the risk of burning you out with dread like some horror games do.

Precious few horror games make the effort to be as visually interesting and technically solid as Little Nightmares and even fewer succeed. If you’re as big a fan of this kind of surreal horror as I am, don’t let this game pass you by.

Also Try: Inside, Murasaki Baby, A Wolf In Autumn