I’ll be honest, what first attracted me to Deformers wasn’t the game itself. In fact, for an embarrassingly long time, I didn’t quite understand what the game was about. I had seen the games’ trailer and watched the strange spherical creatures roll around, but for a while my prevailing thought was simply “Ok, but what do you do?”.

No, what really made me want to check out Deformers was both its price, about half that of a standard boxed game, and the fact that it boasted splitscreen multiplayer, an increasingly less common feature that without fail makes me instantly more likely to get a game. Deformers can be a little barebones at times, but it’s a fun, competitive, physics-based brawler just the same. 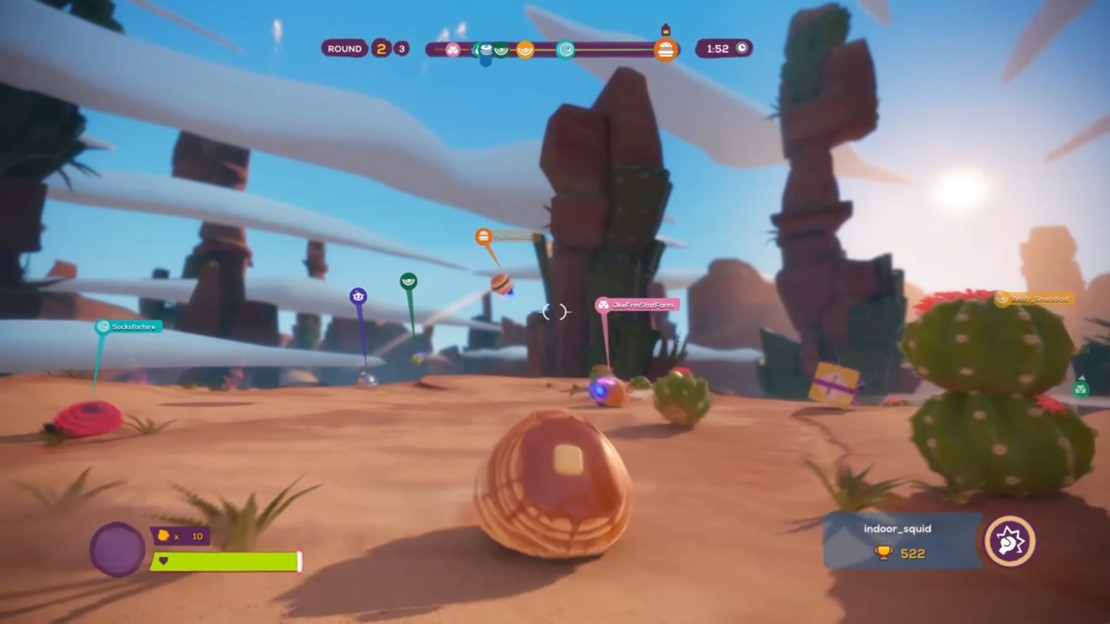 The analogy I keep coming back to with Deformers is “a car combat game without the cars”. Players choose one of a few dozen spherical creatures known as Forms and do battle in a variety of arenas. Forms can shoot each other with “Tribs” that can be gathered up off the ground, knock each other around with a Ram attack that can be charged up, and grab and throw loose objects as well as other Forms. The differences between Forms are cosmetic only, which I quite like, as it means I don’t have to worry that a Form I like the look of doesn’t play the way I like or vice-versa.

There are no loadouts or character-specific abilities in Deformers. There are five “classes” to choose from at the start of each match which boost one of your abilities, but the changes aren’t very drastic and the game generally puts everyone on an even playing field.

With up to eight Forms bouncing around an arena at a time, battles are fast and frantic. The arenas may seem rather small at first, but it means that players are kept close together, ensuring that there are no dull moments during a match. The different modes aren’t anything to write home about, but the deathmatch and team deathmatch modes are good, chaotic fun.

There’s also Form Ball, which is Rocket League, literally, with no attempt made to disguise it. Played in what I can only assume is a legally safe homage to the Rocket League stadium, players race after a large soccer ball and attempt to knock it into the opposing team’s net. Now, I’m not a huge fan of Rocket League, and Form Ball was probably my least favorite mode in Deformers, but I might say that I enjoyed Form Ball a little better than Rocket League itself.

Form Ball is lent a significant degree of expedience by letting players grab the ball and run with it, as well as the ability to throw the ball straight at the net. Not only that, but all of the rules of Deformers are still in effect during Form Ball, meaning that players can still kill each other, so players unskilled at Rocket League can still contribute by taking out members of the opposing team. 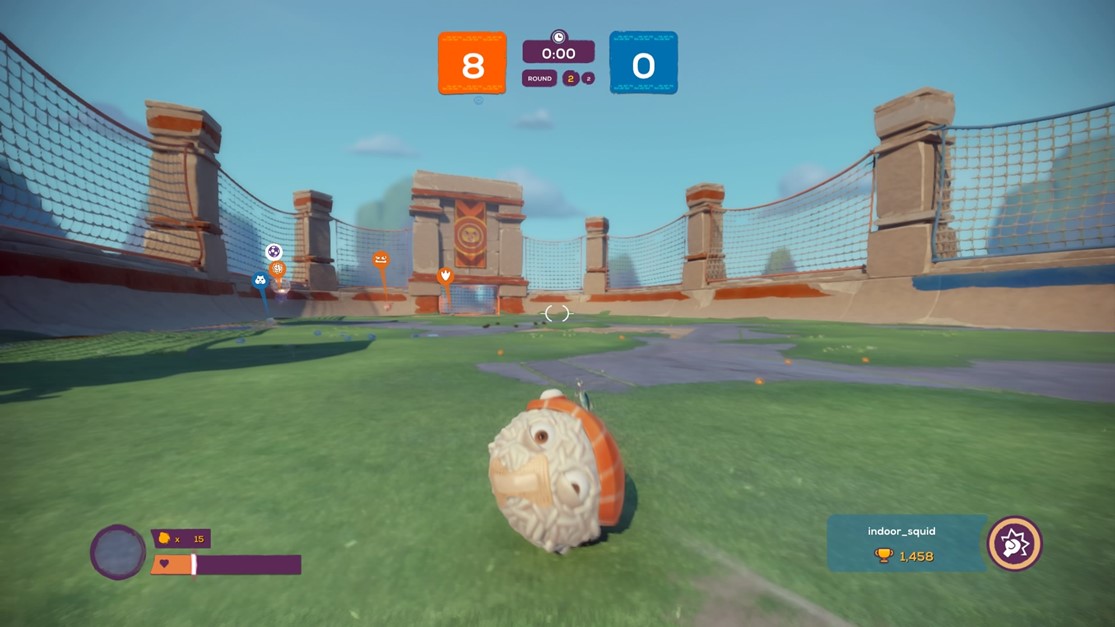 Deformers is the second game published by GameStop through their Gametrust initiative, the first being Song Of The Deep. Many including myself were worried that GameStop’s involvement in the creation of games would lead to their products being cut up in order to hold back certain pieces as pre-order bonuses or DLC; and while I can’t speak for Song Of The Deep, that does seem to be the case with Deformers, at least partially.

As much as I despise pre-order culture, I do occasionally find myself attracted to certain pre-order bonuses and find myself with no other recourse than to pre-order a game to get them. Not long after starting Deformers for the first time, I discovered that all of the characters available to me were the pre-order bonus, meaning that if I hadn’t pre-ordered the game, I would have started off with no characters at all, beyond the standard blue blob Form.

Unlocking new Forms requires Strands, one of Deformers’ primary currencies. Strands are gained each time you level up, but they can also be acquired via microtransactions. While the prices for Strands aren’t nearly as obnoxious as the microtransactions of some other games, it should go without saying that they shouldn’t be in the game at all.

Deformers might not be a full priced game, but it isn’t precisely cheap either. If I pay for a game up front, I shouldn’t then be asked to shell out even more cash after I start playing it, especially considering how basic this game already is in a lot of areas. 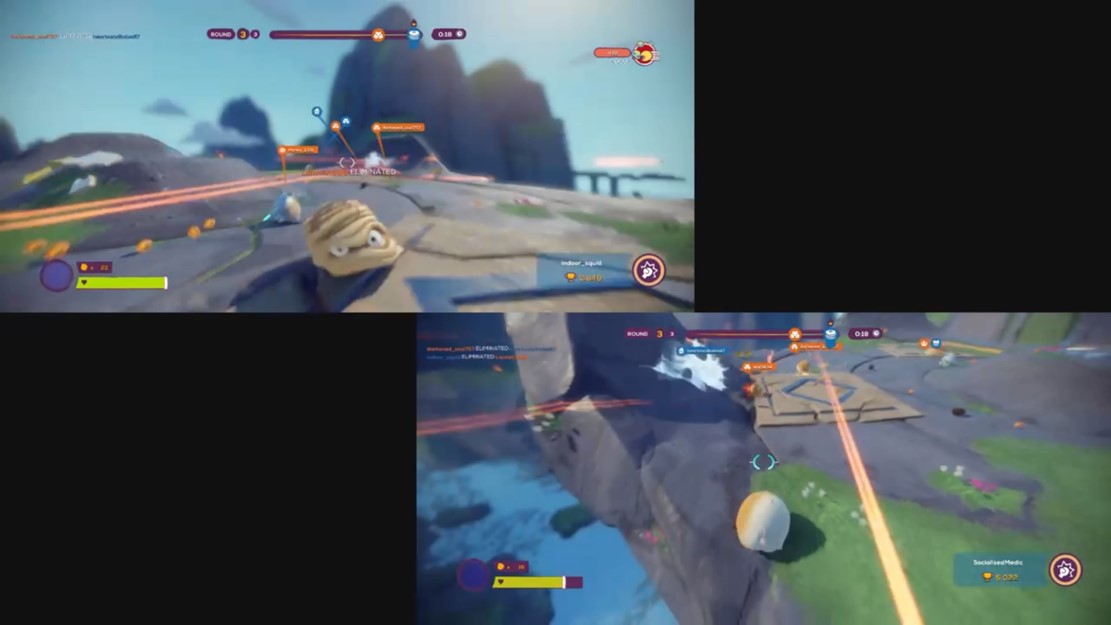 Deformers biggest problem is one of substance. Despite a control scheme versatile enough to support multiple types of gameplay, the only modes available are Deathmatch, Team Deathmatch and “definitely not Rocket League, please don’t sue us” with only a small handful of maps for each. Considering how basic each mode is, there really needed to be more of them on offer.

While we’re ripping off other games, how about a Splatoon-style mode where Forms leave paint behind them, trying to cover as much of the map as possible in their teams paint? Or a Katamari inspired mode where gathering debris increases your size, and players race around trying to become as large as possible. What about a sort of turn-based game of Pool where players can only move by dashing and have to sink their opponents into the pockets of the table? Platforming challenges anyone? These ideas are so easy to think of that part of me worries that some of them were hacked off of the game mid-development with the intent to release them as DLC somewhere down the line.

Deformers’ saving grace is that it isn’t a full priced game. At $40 CDN with four-player splitscreen and easy to understand gameplay, Deformers is clearly trying to be a party game and in that regard at least, it succeeds. Microtransactions and a slight dearth of content may keep Deformers from being a great game, but they certainly don’t stop it from being a good one.