I’ve been playing video games long enough that I can generally tell whether a game is going to be worth getting by the end of its first trailer, so I was pretty sure I knew what to expect from Rain World. It looked like a neat little platformer with survival elements of some kind, with highly detailed pixel-art levels and featuring an appealingly weird protagonist, the Slugcat. In short, I thought I would like Rain World much more than I actually did. While I’ve definitely played worse games, it’s been a long time since a game left me so disappointed. 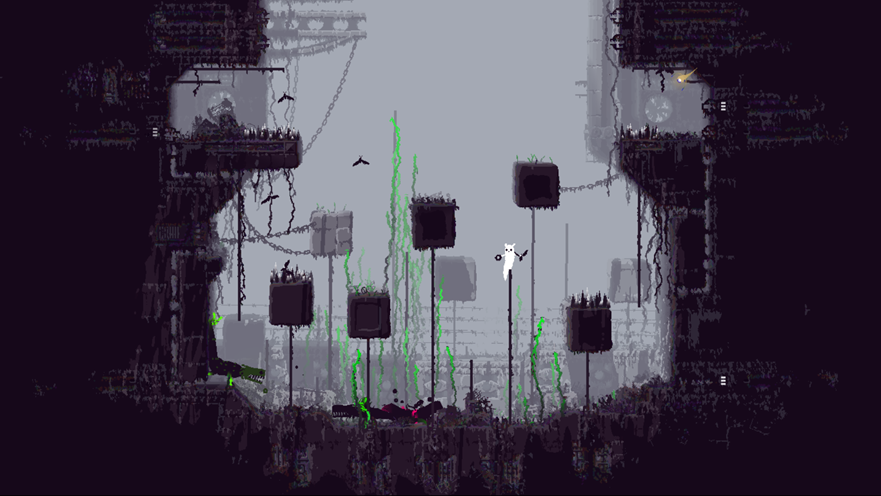 While I wouldn’t exactly call the story unnecessary, it certainly doesn’t come up very often, so I doubt I would have thought about it if it wasn’t there. You are a Slugcat, the envy of the discerning pet owner who, in an opening cutscene completely free of dialogue, is separated from his (her? it’s?) family during one of the floods common to the world. Alone in this strange and deadly world, Slugcat must go in search of them, for it seems that no one lasts long in this place by themselves.

The controls are generally functional and responsive, intuitively using the left stick to crouch and climb rather than using buttons. I was never quite sure whether crouching actually makes you less visible to predators or not, and trying to escape down a pipe can sometimes lead to Slugcat just crouching near it, but for the most part the controls feel natural and facilitate exploration through the world. The map that constantly fills out as you explore is well put together, easy to read and I like how Slugcat closes his eyes when opening it, as if he’s concentrating on recalling the surrounding area. 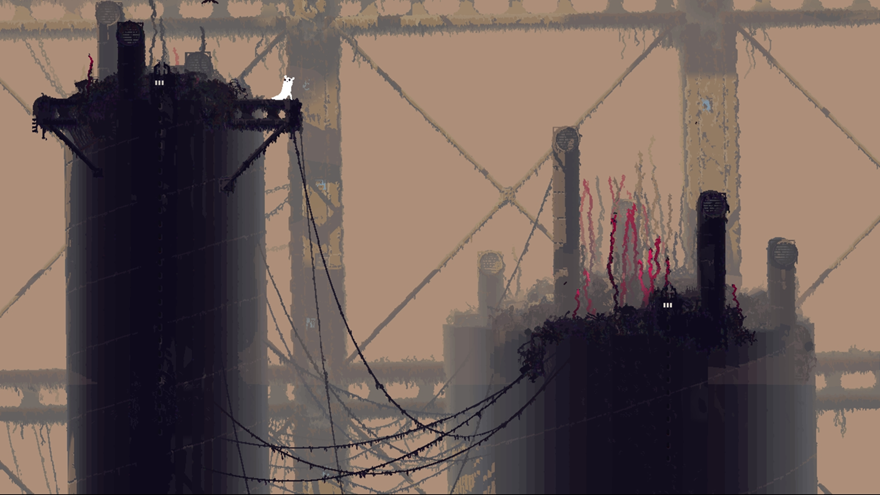 I’ve seen Rain World compared to Dark Souls quite a bit, but as much as I love Dark Souls, I have to disagree. Sure, you die a lot in Rain World, like Dark Souls, but you die a lot in a lot of games. For me, the best description of Rain World would be Limbo by way of Super Metroid. You are a small creature navigating a large world wherein almost everything is higher on the food chain than you. As you explore and map out the world, you’ll find food sources, find safe areas to rest in, discover new predators and of course, probably get killed by them.

This is one game world you will learn to respect if you want to get through it. Enemies can generally kill you in one hit, so you’ll need to learn how and when each one can strike. At time of writing, despite getting into multiple scuffles with several different types of creature, I’ve yet to actually kill any of them. Most fights in Rain World will take place between the game’s predators over who gets to eat you.

That brings us to Rain World’s first major problem, this game has a lot of cheap deaths. Many times I would emerge from a pipe directly into an enemy’s mouth with nothing I could do about it. On the occasions that I needed to get past a lizard, one of Rain World’s most common predators, there seem to be even odds as to whether nailing it between the eyes with a spear will stun it, stake it to the ground, or whether it’ll just shrug it off and insta-kill me anyways. It would also be nice if the game could decide whether or not Slugcat rolls when he hits the ground, as trying to precision platform frequently lead to me rolling to my death off of small ledges.

I really like how the various enemies wander dynamically through the environment, get into fights with each other and generally behave like real animals, but there really needed to be some rules in place to cut down on the amount of impossible-to-avoid deaths. 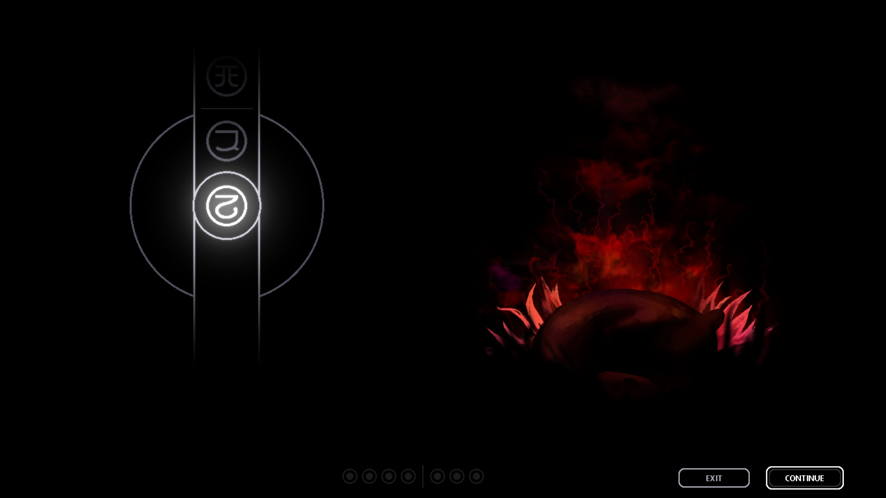 This is the death screen. Get used to it.

Despite being a survival game, Rain World does away with many of the elements most common to modern survival games and instead focuses on two things, eating and not being eaten.

As to the first, the Slugcat has a kind of hunger meter that, rather than steadily ticking down, is made up of seven points of which a minimum of four must be filled by the end of each in-game day. This can be done by picking or knocking down the hanging fruit that grows across the world, or by finding nests of batflies to catch and eat.

The end of each day brings an apocalyptic rainstorm that, starting with a trickle, gives you maybe two minutes find shelter before the screen fills with water. If you don’t have at least four points of food, you die inside the shelter, which forces you to balance exploration and foraging while staying in range of a safe area.

The second rule of survival, not being eaten, comes down to learning the games mechanics and familiarizing yourself with the nuances of how Slugcat controls. The mechanics are simple; you have two inventory spaces, a left hand and a right hand. If there’s food in your hand, you can eat it and if there’s a throwable item in your hand you can throw it. You can hold any combination of throwables and food, with the strange exception of not being able to hold two spears at the same time, and you can switch items between your hands by double-tapping the pick-up button, which is useful as you will always throw the item in your right hand first. Other than the jump button, which can be held while crouching to charge a longer leap, that’s it. Like any good survival game, you’re given the bare minimum of tools you need to succeed and left to navigate the world and all its dangers entirely on your own.

Your progression through the world is determined by the Karma system, which grants access to new areas based how many days in a row you can survive. Each time you rest in a safe area, a column of symbols representing your Karma appears on screen and your place in it advances by one. When approaching the numerous gates that allow access to new sections of the world, you must have earned its corresponding symbol or higher in order for it to open. Each time you die, your Karma drops by one, unless you’ve found and eaten one of the rare golden plants in the world, which gives your Karma a shield to weather a single death. If you can make it back to where you died without dying again, the golden plant will still be there and you can eat it to armor your Karma again.

Unfortunately, this unassuming progression system actually ends up breaking the game, and in multiple ways. When I reach a door that requires my Karma to be one or two points higher than it is, dying several times trying to get that Karma and sliding all the way to the bottom of the meter is demoralizing in the extreme. To refute the comparison to Dark Souls even further, Dark Souls doesn’t require you to get you souls back when you die if you don’t want to, and it certainly doesn’t lock all the doors out of the current area until you do.

There are enough survival mechanics in Rain World already to render the Karma system unnecessary. You’re already racing the clock each day to gather enough food to rest in a safe area before the rain comes; all while attempting to maintain a relatively forward momentum. Adding a system that ultimately just makes it harder to get around only serves to arbitrarily slow the player’s progression in a game that, by virtue of it’s difficulty, would probably have had fairly slow progression anyways. 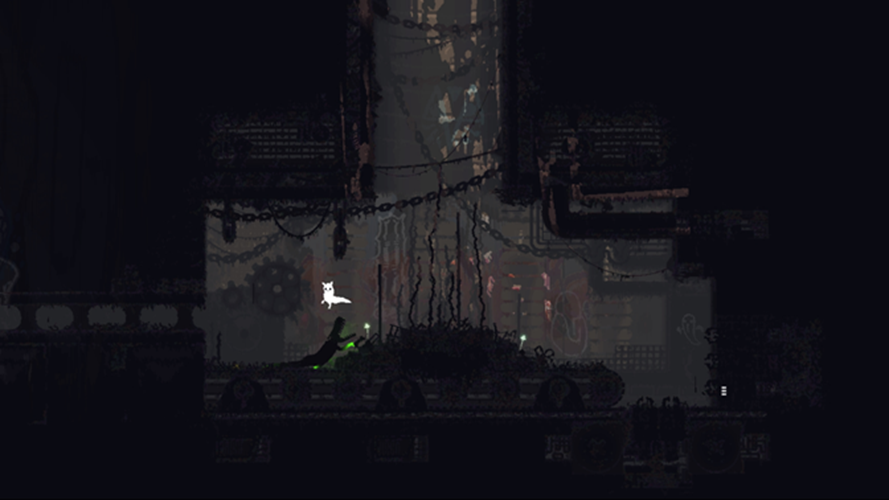 Rain World started off pretty enjoyable. The pixel-art graphics are nice to look at and the moment-to-moment gameplay is more than solid enough to carry a survival platformer. But the more I played Rain World, the more my good will towards it drained away. It all comes back to the Karma system, which saw me become so demoralized after getting trapped for the better part of two days in one area that I simply gave up on the game.

Rain World is possibly the best example I’ve ever seen of a single, seemingly innocuous design decision having disastrous consequences, and especially sad when it’s clear that a good game is desperately trying to happen in spite of it.

Try Instead: Limbo, Super Metroid, The Flame In The Flood, Incredipede