The review of Horizon: Zero Dawn can be found [here].

As most game critics will tell you, giving a game a ten doesn’t mean the game is perfect. At least for me, it means that the game excelled in everything it set out to do and whatever flaws it did have didn’t get in the way of the fun in any significant way.

Most open-world games end up being jacks of all trades and masters of none, but Guerilla Games managed to polish nearly every facet of Horizon to a mirror shine. Graphics? Stunning. Gameplay? Smooth, responsive and satisfying. World? Big, but not too big and packed with enough content to justify it’s size without feeling tedious or redundant. Story? It isn’t exactly a timeless classic that we’ll all be telling our grandchildren, but it was well-told throughout; alternately touching and gripping when it needed to be. Guerrilla also managed to put a unique spin on well-worn tropes, like what a post-apocalyptic world might look like, ultimately creating a sort of Fallout for grown-ups. 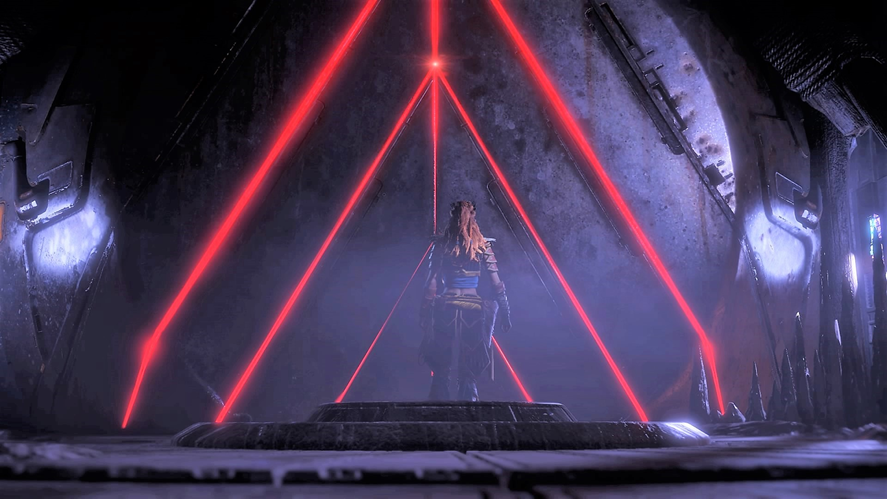 I was able to see most of the big reveals of the main story coming a mile away, but Guerilla managed to make the fine details of the story intriguing enough that I always wanted to know more.

“Ok” I thought going in, “Since the game takes place amidst the ruins of human civilization and there are all sorts of robots running around, then presumably humanity fought and lost a war against them”. While that turned out to be pretty much exactly right, the story behind those events hooked me and didn’t let me go until the very end.

I didn’t expect to get nearly as much insight into the world before it was destroyed as we did, much less for the story of Elizabeth Sobek and Ted Faro to be arguably the most interesting part of the story. I was invested in the story from the start, but the mission where Aloy enters the Faro building was where it reached a new level. This was also when I started really paying attention to text logs, as the Faro building has some of the more interesting ones. I particularly enjoyed the e-mail discussing the PR nightmare of a Faro robot eating what might have been the last dolphins.

I was constantly surprised to see the game, through it’s various old-world characters, consistently giving us the details of how the Faro robots destroyed the world, humanity’s attempt to delay them with Operation Enduring Victory long enough for Elizabeth to finish and implement Zero Dawn; only then to essentially give us a guided tour showing us exactly what Zero Dawn does and how it would work in a way that almost makes it seem plausible. I can’t think of a single other story involving the apocalypse that has such a detailed narrative through-line from the world before an apocalypse all the way to the world after.

Considering what a good job Guerrilla did of tying up all the story’s loose ends, it’s strange that we never learn the exact fate of Ted Faro. The game shows us what happens to Elizabeth Sobek, as well as the deaths of the Project Zero Dawn team, killed by Faro in the meeting room. A potentially interesting point that goes completely uncommented upon is that for a short while at least, Ted Faro is literally the last man on earth. It would have been interesting to get an audio log or two of him ruminating on that; or maybe one about him being the one who technically finished off humanity. 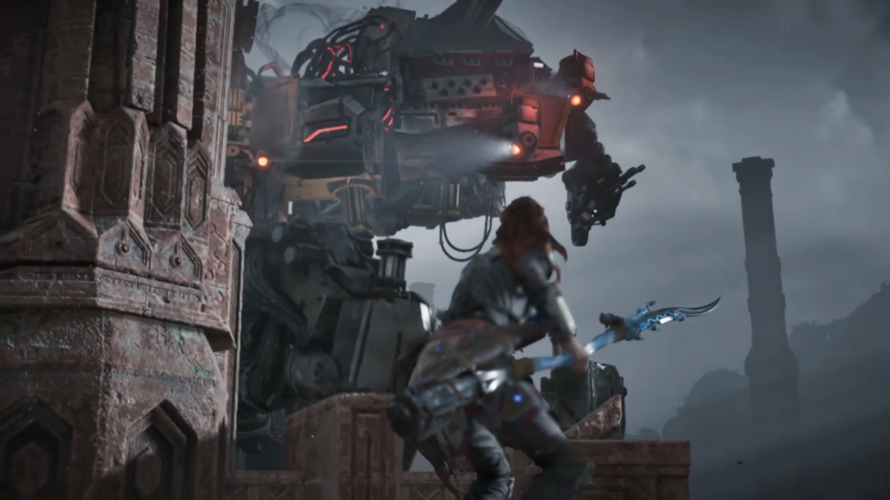 It’s the mark of a great game when your biggest criticism is that you just want more of it, but that’s the thought I keep coming back to when I think back on Horizon. The game is so chock-full of well-written characters that I keep wanting more reasons to interact with them; not at the expense of what we got in the game as it is, but Sona, Varl, King Avad, Petra and especially Vanasha are great characters that Guerilla made me want to spend time with. Even many of the one-off characters were interesting enough that I wanted more to do with them after their side missions were over, particularly the doomed lovers from Sun And Shadow.

I learned after finishing the game that it’s apparently possible to run into Nil more than I actually did. I encountered him for the first time when I approached the second-last bandit camp on the map. He’s an interesting and eventually even slightly sympathetic character, I just wish I could have had a little more time to get to know him.

It would have been nice to have a few more missions after the point where the Hunters Lodge missions end. If Talanah became the new Sun Hawk, then Aloy automatically gets promoted to Hawk, doesn’t she? Every questline has to end somewhere of course, but would have been cool to be able to take a new initiate to the lodge under our wing and do a few missions with him or her.

Speaking of the Hunter’s Lodge, I assumed upon discovering it that eventually there would be other guilds to join as I made my way through the game, but there never were. It’s possible that having more groups like that would have gotten in the way of the story that the developers were trying to tell, but I can’t help imagining what other factions Aloy could have gotten involved with, like a Gladiator-style set of arena fights in the Sun Ring, or even a few more missions with Sona’s braves. 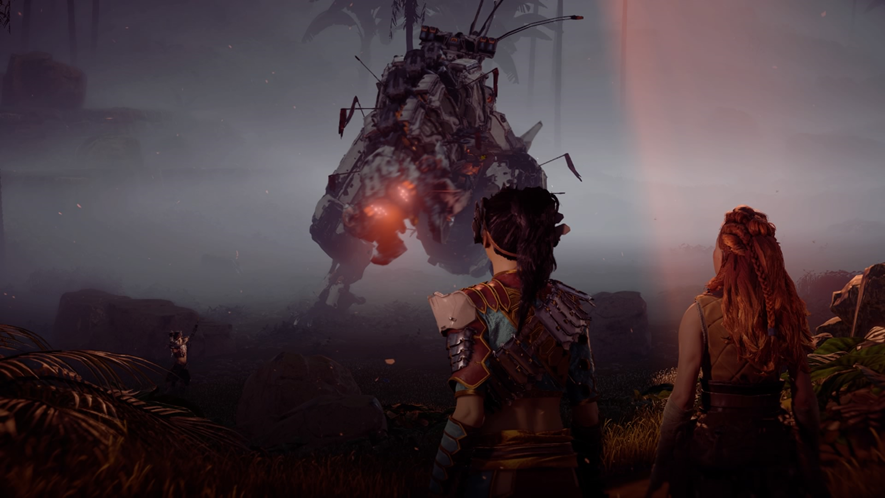 As great as the story was, the post-credits scene annoyed me a little. When the credits are over, we fade back in on Hades’ computer core with Aloy’s spear still lodged in it, only for Hades’……soul? (or something)…to fly out of the sphere and across the world, landing inside some kind of sci-fi lantern thing held by Sylens, who then begins walking towards a Horus-class Faro robot.

This stinger bugs me for several reasons. Guerilla seemed to put a fair amount of effort into making the science behind Horizon’s machines and various sci-fi concepts feel as grounded as possible. There was a reason for the machines to look and act like they did, the fairly unique apocalypse scenario worked all the way through and Project Zero Dawn made as much sense as that kind of thing reasonably could. Hades getting sucked into a lamp via science magic seems to spit in the face of that carefully constructed internal consistency.

The other reason why the stinger didn’t sit well with me is because of what it does to Sylens as a character. Throughout the story, he comes across as an antisocial, but otherwise good character, who we later learn is trying to atone for the things he’s done. His actions in this scene would seem to undermine the redemption arc he went through in the story.

“Well,” You might respond, “Maybe he was just lying to us about helping us destroy Hades”, to which I would say…no. Not, “No you’re wrong”, but rather no, that’s not how proper storytelling works.

When a character spends an entire story lying to us, the writers have to drop hints that maybe that character isn’t on the level. Take Atlas from Bioshock, who begins every request with “Would you kindly?”. Nobody is going to suspect that one of the mannerisms of the game’s supporting character might be building to a reveal about your character’s hitherto unknown mental conditioning, but it’s there just the same for you to be able to look back on, along with several audio logs about the disappearance of Frank Fontaine just before Atlas showed up. All throughout the entire game the writers dropped subtle clues, laying the groundwork for one of the best plot twists in games.

Conversely, we’re never given any reason to think that Sylens isn’t telling the truth. When he does give us information, he does so reluctantly at first, giving us even less reason to think he’s lying about trying to turn over a new leaf.
I was actually hoping that a future Horizon game might let us play as Sylens, as when you make a rich interesting world, it’s generally a mistake to stick with a single character of set of characters. With Sylens’ positioning in this scene as a possible future villain, it seems now as if that isn’t going to be the case, although Guerilla has mentioned that they’re working on story DLC for Horizon, so maybe we still could.

One final thing, Horizon: Zero Dawn doesn’t need a sequel. It’s absolutely going to get at least one, I have no illusions about that, but Horizon told the complete story of the most interesting part of the life of the most interesting character in that game’s world. Any other story you tell from this point on is going to struggle mightily to be as cohesive and holistic as Aloy’s story in Zero Dawn.

One way to potentially skirt this pitfall might be to pull the same narrative trick Zero Dawn used again. For the sequel, jump the timeline forward a hundred years or so and have the main character be Aloy’s granddaughter; and to use the same naming tradition, lets call her Stel (Hey, it’s not any worse than Aloy). In Horizon: Zero Dawn 2: Dawn Harder, Stel would follow in the footsteps of her grandmother, Aloy, on a journey that Aloy embarked on after the events of Zero Dawn, a journey from which she never returned. Meanwhile, Stel could become embroiled in whatever Hades-related plot Sylens set in motion at the end of Zero Dawn. If I do say so myself, that sounds like a pretty good basis for a sequel. I love Aloy as much as anyone, but her story has already had a beginning, middle and, crucially, an end. 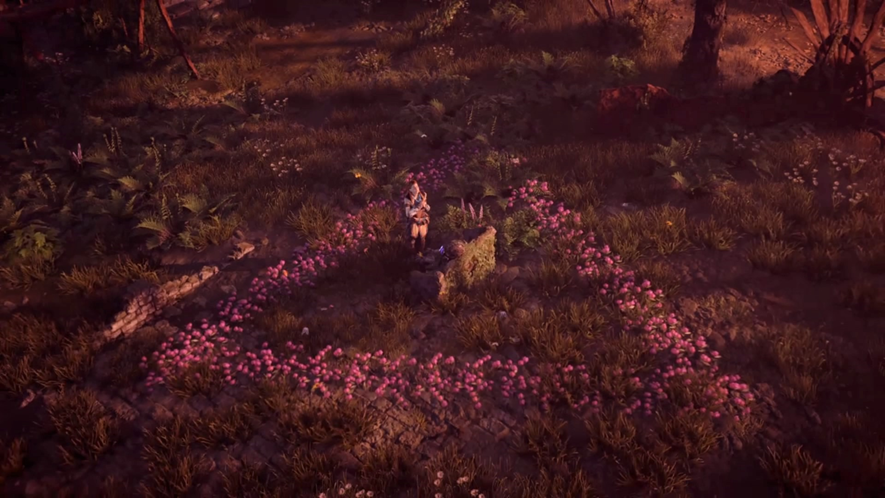