After Nintendo’s Switch reveal conference and in the days that followed, my interest in the system was thoroughly nipped in the bud by caveat after caveat, to the point where I’m likely not going to be getting a Switch until somewhere around the end of the year, after Nintendo has had the opportunity to iron out some of the Switch’s many kinks. Luckily, a friend of mine got one and was kind enough to let me buy him a game or two on it to review.

Fast RMX has it’s share of problems, but it’s a fun little racing game and, by strange happenstance, is possibly the best game that’s completely exclusive to the Switch right now. 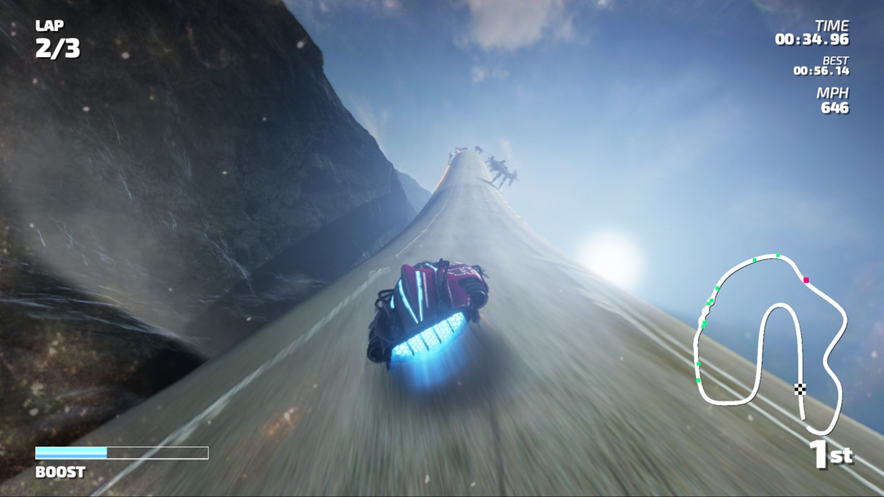 The Fast Racing games are futuristic arcade racers, reminiscent of Wipeout or F-Zero, and belong to a particular vein of old-school racers that’s possibly old and obscure enough to actually seem like a new thing to a younger generation of gamers.

If there’s one thing that Fast RMX absolutely nails, it’s a good, tangible sense of speed. Like those futuristic racers of yore, the hovering vehicles of Fast RMX move much faster than the cars of most average racing games like Forza or Need For Speed. Power-ups can be found on each track which add to a boost bar when collected, allowing you to maintain a high speed in the stretches between boost pads. It’s a pretty standard mechanic, but it works well and I like how your ship only uses a quarter of your boost bar at a time, allowing you to ration it out rather than just burning through the entire bar at once. More often than not, memorization of a track is just as important as reaction time. That may be true of other racing games as well, but it applies doubly when Phase Shifting gets involved.

Fast RMX’s distinguishing gameplay mechanic is the ability to change your vehicle’s “Phase”, switching it’s color between orange and blue. Tracks are laden with boost and jump pads, and being in a specific phase allows you to interact with those of the same color. Having to constantly be mindful of what phase you’re in adds an interesting layer to gameplay, as being the wrong color can be an active detriment, slowing you down on boost pads or ignoring jump pads, sometimes causing you to drive straight into a pit. On certain tracks, this mechanic can translate into “Be the right color or die”, which requires players to really sharpen their skills to do well on later tracks.

The controls are tight and responsive, though I found the rumble to be a bit too strong. When the Joycons are inserted into the grip, the small space between the Joycons and the grip generates a loud buzzing sound when the rumble engages, as if a swarm of furious bees are trapped inside the Joycons, which considering Nintendo’s sometimes esoteric design philosophy may well be the case. 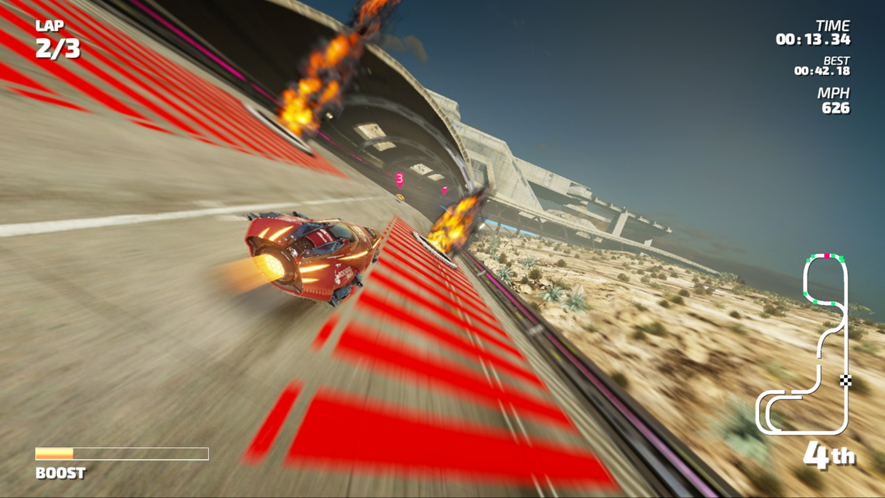 Once you get tired of winning races, Fast RMX also includes Hero Mode, a brutally difficult mode where coming in first is the only way to win and a single death will kick you out of the race. At time of writing, I’ve yet to actually win a single race in Hero Mode, so it’s a good idea to play through several cups before attempting it. It’s nice that races in Hero Mode only happen one track at a time, but players will need to have absolutely mastered the games tracks and at least one type of ship to even stand a chance.

Speaking of tracks, the numerous and varied environments of Fast RMX are a sight to behold. The Switch may be underpowered compared to it’s competitors, but the developers have still managed to whip up some gorgeous levels to race through, like a city at night bathed in neon light, a track in space amidst a meteor storm or series of platforms rising out of the ocean during a torrential rainstorm.

Each makes an attempt to distinguish itself in some way, such as by having a unique track design or level hazard. Every track in the game is well-designed overall, many with branching paths and shortcuts. However several tracks have notable design flaws that I’m surprised made it into the game.
Some tracks have covered sections that it’s possible to land on top of after a jump, though doing so will instantly kill you rather than just letting you ride on them. Landing on the lip of a track after a jump can also cause instant death, and several tracks have ceilings that it’s possible to slam into simply by driving too fast up a ramp or into a jump pad. Considering that in a racing game you generally want to be going as fast as possible at all times, it’s a little bewildering that you’re able to do that. None of these issues occurred too frequently, but they really took me out of the experience when they did happen and I refuse to believe that none of these problems were caught during playtesting.

Arguably the Switch’s best feature is it’s gamepad which splits into what are essentially two Super Nintendo controllers, meaning my friend and I were able to engage in Fast RMX’s local multiplayer without needing to shell out any extra cash for the Switch’s ludicrously overpriced accessories.
The game supports up to four players in it’s offline multiplayer and runs well with no noticeable slowdown or sacrifice to graphical quality, even when the Switch is undocked.

The individual “Joycon” controllers work well in local multiplayer, which was one of the features of the Switch I was most dubious about. With their trigger-extending clips attached, the joycons handle comfortably enough and I never felt like I had to overextend either of my thumbs reach the buttons. I will say however, that switching from using the full gamepad in single player to just one joycon in multiplayer can be a little jarring, as the two inputs use slightly different control schemes by default. Luckily, Fast RMX’s controls can be fully customized in the Options menu, which allowed me to remap the boost button the be the same in both setups, as well as relocate the pause button to the D-pad so I don’t have to take my thumb off the accelerator when I want to pause my game.

Up until trying Fast RMX’s online multiplayer, I’d concluded that I just wasn’t very good at the game; even on the game’s lowest difficulty setting, I sometimes had trouble placing in the top three spots when bots were involved. Upon entering an online race however, all of that changed.
Racing against entirely human opponents, I only failed to place twice in the span of about a dozen races.

This was when I realized that Fast RMX has some considerable rubber-banding issues at times. For those who don’t know, rubber-banding is a system that developers of racing games use to keep races competitive. The system affects a game’s AIs and will cause them to slow down slightly when they’re ahead of a player and speed up when behind them, keeping the player in the center of the action, fighting for the lead throughout the race. Even if you don’t notice it in your favorite racing game, it’s there, and when done properly it’s completely invisible. Ideally, rubber-banding should make it possible to catch opponents ahead of me and also possible for my opponents to catch me, but not if I’m playing well enough.
The problem comes when a game’s rubber-banding is too strong, leading to situations where I’m performing near-flawlessly, boosting at the right time, making proper use of boost and jump pads and not hitting any walls, but still my opponents come rocketing past me from behind and there’s nothing I can do about it.

For me, this why racing games with little to no rubber-banding like Motorstorm are ultimately more fun. Sure, a near-total lack of rubber-banding can lead to you getting left completely in the dust, but when you win you know it’s because you’re the best, and when you lose, you know it’s not because the AIs were basically cheating. 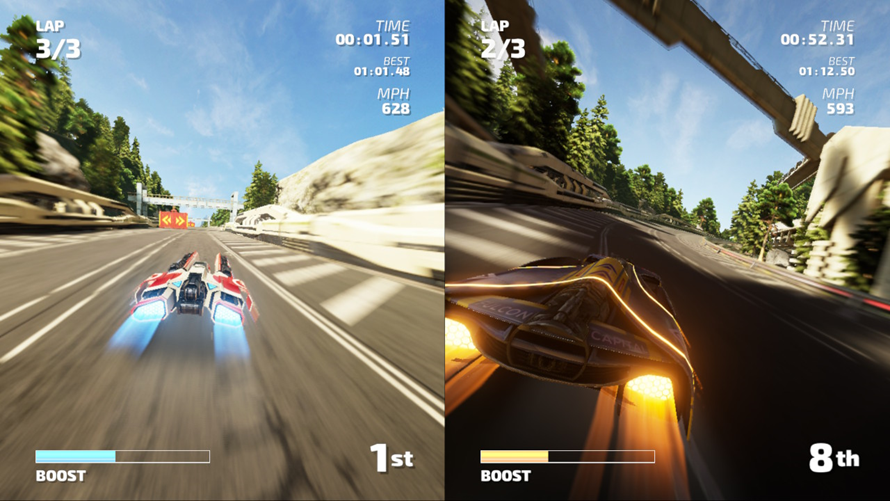 Fast RMX has it’s share of problems, but it’s strengths usually manage to outweigh it’s weaknesses. The frustration I feel when I die from a flaw in the game’s track design falls away when I’m tearing through city streets, threading through the legs of a giant spider-bot or dodging asteroids while flying through space at flat-out glorious speeds.

I don’t want to give the impression that the occasional rubber-banding issue renders Fast RMX unplayable, far from it, but it means that the game is ultimately best experienced with as few bots as possible; either online or locally with two to three other people. At present, I had no problem connecting to other racers online, though I worry that once Nintendo starts charging for it’s online services, Fast RMX’s online community will dry up big time.

If you’re an early Switch adopter who parted with several hundred dollars to be able to play Zelda at your local coffee shop, you could certainly do a lot worse than checking out Fast RMX to help tide you over until a more steady supply of Switch games starts coming in this fall.