Board games and video games form interesting counterpoints to one another. Board games are inherently social and, in the case of Role-Playing board games, require the use of imagination and conscious thought much more than video games do. On the other hand, video games can achieve a level of storytelling, immersion and fluidity of gameplay that board games couldn’t hope to touch. It must be a unique challenge then, to adapt a video game to the format of a board game; to attempt to boil the entire experience down to one of pure gameplay, but still evoke the feel of the source material for fans of the series. That was the task accepted by Eric Lang in designing Bloodborne: The Card Game and the result is a fun, strategic co-op card game that doesn’t quite reach it’s full potential. 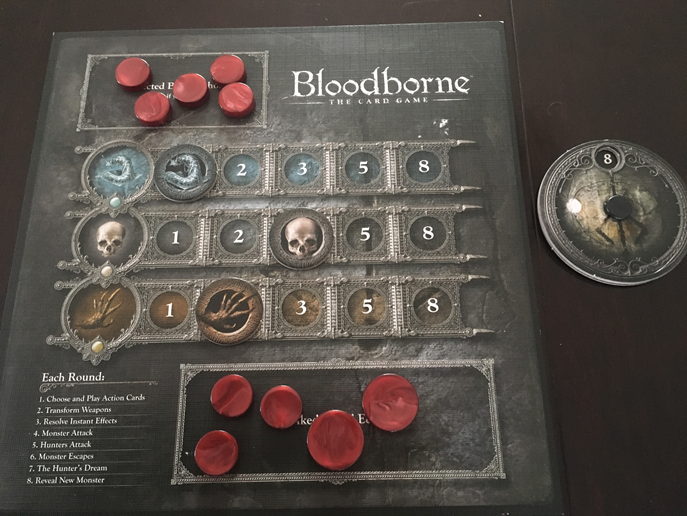 Bloodborne: The Card Game takes place in the Chalice Dungeons, ancient, sprawling labyrinths deep beneath the earth containing untold riches and unspeakable horrors.
Gameplay is outwardly cooperative, everyone fights monsters at the same time with the goal of reaching the Final Boss at the end and defeating it. However, only one player can ultimately win.

In some ways, Bloodborne: The Card Game is similar to Munchkin, another dungeon-crawling co-op card game. But where players in Bloodborne are told to work together at the outset, it’s made clear to players of Munchkin that it’s ultimately every man for himself. People who aren’t trying to screw each other over may occasionally have a difficult time avoiding it, as several cards deal damage to other players.I would say that as a veteran of the Bloodborne video game, I’ve been conditioned not to want to stab my co-op partners in the back, but a friend of mine who’s played about as much of the video game as I have didn’t seem to have any trouble with it, so maybe it was just me.

It’s important to put players in the right mindset to play your game and Bloodborne’s biggest problem might be that it doesn’t. The co-op mentality is also at odds with the mechanics of the game. The way a Chalice Dungeon works in the Bloodborne video game is that, unless someone dies, either everyone wins or no one does. If there was a way to secure a group victory at the end of a game, or even a way to more directly help out your teammates by, for example, using a healing item on them or tanking damage from an attack, then perhaps the game would properly evoke the feel of it’s source material. As it stands, it’s still a fun game, it just isn’t Bloodborne. 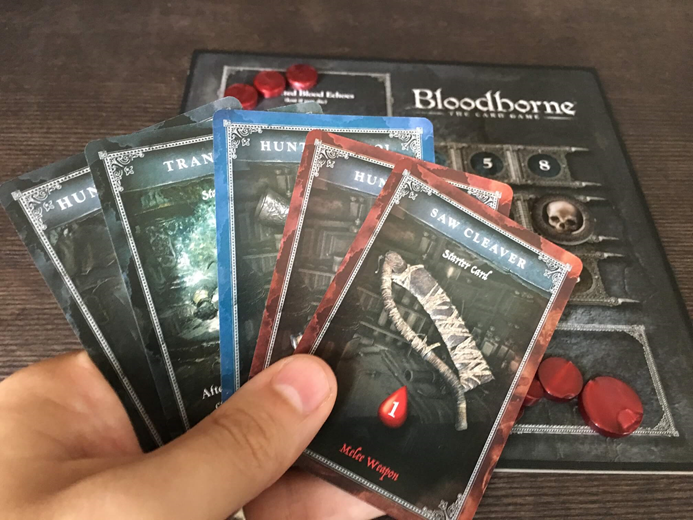 When a monster appears at the beginning of each round of Bloodborne, each player chooses a card from their hand and play them simultaneously. Most cards are either weapons that damage monsters or items that have various special effects. There are also two special cards, the Transform card, which allows a player to make their selection after they’ve seen the cards of their partners, but also commits them to playing a weapon, and the Hunter’s Dream.

Playing the Hunter’s Dream restores your health to full, puts all of your used cards back into your hand and allows you to take a new card from an Upgrade Deck, which will either be a new weapon or item. Returning to the dream also banks your Blood Echoes, which will otherwise be lost when you die. Blood Echoes act as victory points and are gained every time a player deals damage to a monster.

In combat, the monster always attacks first, which means that players will be gradually worn down, encouraging them to visit the Hunters Dream periodically. When a monster is defeated, the players who dealt damage to it that turn earn trophies which grant a bonus to victory points at the end of the game. This is where the competitive element of the game comes into play. Several weapon cards deal their damage instantly upon being played, while others can damage other players in addition to the monster. Played cleverly, these can allow you to snipe a monster, killing it before anyone else can damage it and netting you a trophy, or damage your teammates and force them from the fight early.

Each game consists of ten encounters, seven monsters and three bosses. Monsters flee after a single round, robbing you of any trophies or Blood Echoes you would get for killing them, but Bosses stay in play until they’re defeated. The enemies that make up the Chalice Dungeon deck are randomly selected from a much larger pool of monsters and bosses, meaning players will have several games without seeing everything; the same applies to the considerable variety of weapons and items in the Upgrade deck. Every enemy has a green, yellow or red lantern on their card that indicates their threat level, and corresponds to one of three colored dice that are rolled when they attack. Once every enemy has been defeated, players move on to the Final Boss.

While usually fairly tough, the main purpose of each Final Boss is to act as a modifier for each game. Each possesses a different passive effect that slightly changes the rules of the game. One increases the maximum health of monsters, another adds a new monster to the deck for each one that escapes. These modifiers ensure that the presence of a Final Boss is felt across an entire game, not just the end
The effect of each Final Boss offers a unique challenge without feeling unfair, with the exception of Rom, The Vacuous Spider. When Rom is in play, any hunter that dies twice is eliminated from the game. That isn’t just unfair, it’s straight-up bad design. Since death can come quickly and without warning, an unlucky player might be left with half an hour to fritter away while their friends finish the game, and that’s not fun.
At first I tried a house rule with Rom that raised the death threshold from two to three, then another that lowered monster damage by 1, making it slightly harder to die in the first place, but it quickly became apparent that no matter what conditions we added, elimination in a game like this is simply a failure of design. 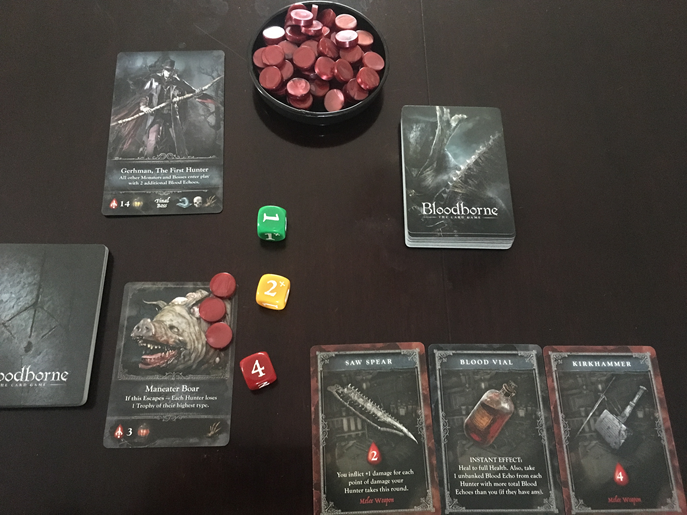 The fact that nothing from Bloodborne’s Old Hunters expansion makes it into the game obviously doesn’t ruin it by any stretch; but it does mean that several enemies, weapons and bosses that would have been great additions never show up. It’s possible, however unlikely, that an Old Hunters card game expansion could be released later and I would probably snap it up if it ever is, but it would have been nice to have it in the game right off the bat.

It’s worth noting that the game has some excellent visual design. The artwork is all well done and everything looks exactly as it should, though several of the monster cards appear to be screenshots directly from the game, which may seem tacky to some. The stats and effects of each card are all easy to understand and are laid out clearly and cleanly on the cards. I’ve seen a lot of games where cards are absolutely plastered with numbers and symbols that simply make the average persons eyes glaze over and can turn people off of a game before it’s even begun.

Bloodborne frustrates me a little. It’s a good game, but with one or two more passes through the design phase it could have become a great one. There’s a satisfying feeling of character progression when you gain new items and trophies. And looking around at your fellow players as a new monster appears and trying to guess what they’re going to do, which of course isn’t necessarily going to be what they’ve said they’ll do, can be great poker-style fun.
I might recommend waiting for a sale to pick up Bloodborne: The Card Game, as the experience sometimes feels a little light for fifty dollars, but anyone who tries it is likely to have a good time.

7/10
+ Fun, Pseudo-Adversarial Co-Op
+ Great Visual Presentation
– Terminology May Be A Little Impenetrable For Non-Fans Of The Video Game
– Doesn’t Really Feel Like Bloodborne