You can read the review of RE7 here.

I have to commend Capcom for not letting it leak anywhere, at least as far as I know, that the game doesn’t take place entirely in and around the Baker house. Nearing the end of that part of the game, as my mental map of the house was getting filled out (as well as the actual map), there was an increasingly loud voice in my head saying “That’s it?! We’ve only been playing for three and a half hours! This game’s shorter than The Order!”. I was relieved and overjoyed then, to discover that the game takes us to two more locations before it was over, and that all told, the Baker house only accounts for about half of the game.

I really liked being able to play as Mia during the ship section of the game, it was cool to be playing as a new character at the same time we entered a new area; though I would have preferred to play as Mia for the entire remainder of the game rather than switching back to Ethan half an hour before the end.

See, switching to Mia when we did served a purpose, as the ship is where we make certain discoveries about her character, whereas when we switch back to Ethan it’s seemingly done for its own sake. It also has the effect of robbing Mia of some of the agency her character should have had in the story; Ethan saved Mia at the Baker house, it should have been Mia’s turn to save Ethan by vanquishing Eveline. 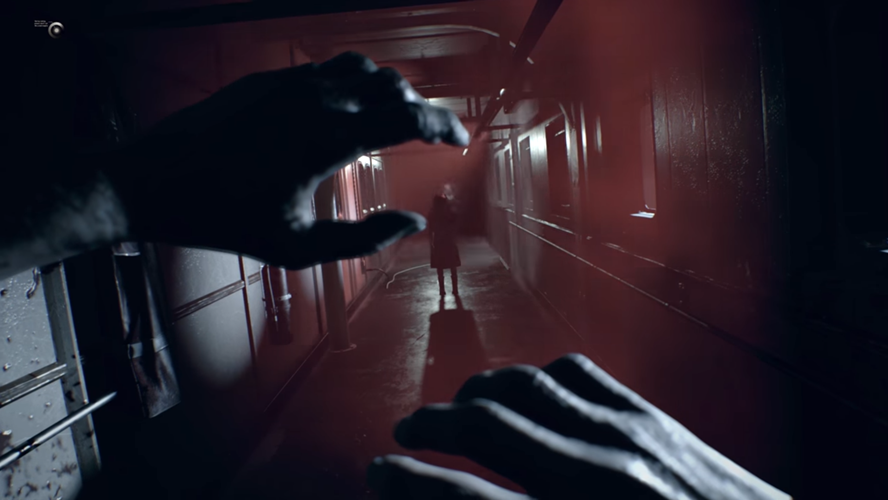 By the way, maybe I missed it, but I don’t think it’s mentioned at any point exactly who Mia is working for. So for the purposes of this conversation, I’m just going to refer to them as “The Company”.

One of my hopes for the Resident Evil series going forwards is that Capcom runs with The Company, as well as this seemingly new version of Umbrella (more on them later). Not that Mia was an particularly deep character, but she would be as good a character as anyone to follow as we learn more about The Company. That is, of course assuming that the ending wherein she survives RE7 is canon, but it would also give us a reason to keep Ethan around.

It’s never made entirely clear just how involved Ethan is with The Company, or even if he is at all; unless or until we learn more, my final answer is that he isn’t. For one thing, if he was, he should have immediately recognized the E-Series creatures running around as Eveline’s work. My read on him is that he was just an ordinary guy whose wife was secretly working for a shadowy organization. For a while I thought that perhaps Ethan was Allan (the guy working with Mia on the ship), using a pseudonym while traveling with Eveline, an easy mistake to make considering we never really get a good look at Ethan’s face.

Speaking of Eveline, I feel that the game’s story weakens significantly once she gets properly introduced on the ship. After RE7’s well-paced and genuinely scary first half with the Bakers, to change to a significantly worse antagonist for the game’s second half was a little disappointing. By the way, it really doesn’t matter that Eveline is technically much more powerful than Jack or any of the Bakers because she isn’t intimidating in the least; when every encounter with her boils down to “Eveline shows up, throws a temper tantrum and leaves” she just comes off as an angry, immature and frankly a little stupid.
If she had been presented as a little more intelligent and we had gotten the chance to see her actively controlling Mia or one of the Bakers, in other words, actually acting like the puppet master that it turns out she was lab-grown to be, she might have been a more compelling villain and a believable threat.

The final boss fight against Eveline was visually impressive, but disappointing from a gameplay standpoint as it pretty much boils down to “Hit her with everything you’ve got, as fast as you can”. After the demolition derby in the garage, dueling chainsaws in the basement and the greenhouse fight where Marguerite crawled around the place like a Xenomorph, I was expecting something a little more involved.

The simplicity of the final boss coupled the length of the mine area, as well as the fact that Mia doesn’t get a boss fight of her own on the ship makes me suspect that the devs spent the vast majority of RE7’s budget and development time on the Baker house. If that’s true, it was absolutely the right decision, but it still makes me long for what might have been. 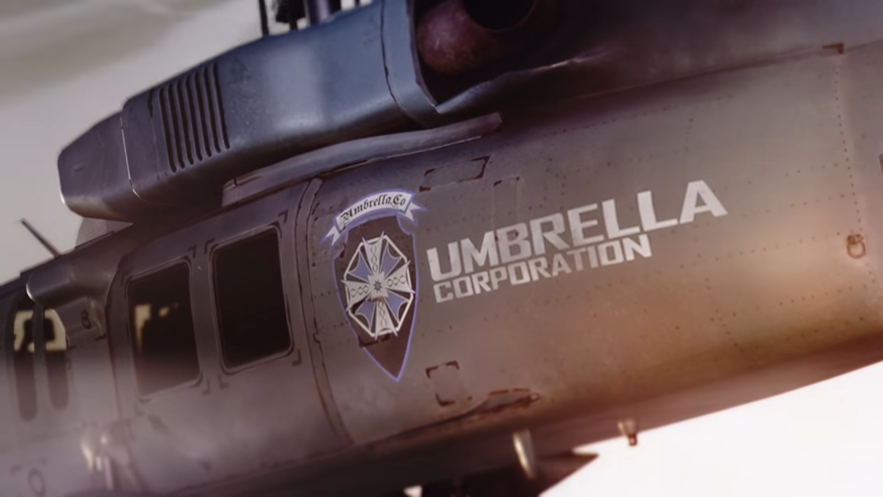 And now, the ending. The end of Resident Evil 7 makes me cautiously optimistic for future RE games, even while I’m fully aware that given Capcom’s skill with handling sequels and writing stories, I’m likely setting myself up for disappointment.

Upon killing Eveline, a man in military garb drops down in front of you and introduces himself as “Redfield” before taking you into a helicopter with a strange new Umbrella logo on the side.
Many fans have asserted that whether he’s a clone, an imposter or a some swamp gas reflecting off a weather balloon, this isn’t the real Chris; citing his appearance and that he doesn’t specifically refer to himself as Chris.
Right now, I’m inclined to believe that this Chris is the real one. The fact that he’s referred to as Chris Redfield in the credits pretty much cements it for me; misdirection is one thing, but it would be bad form to outright lie to us. My assumption is that Chris simply introduces himself as Redfield because his surname is more iconic to fans of the series than his first name. As for the assertion that he doesn’t look like Chris, I would respond that he looks very much like how Chris used to look in the original games, all the way up to Code Veronica. I suspect the change is due to the fact that his appearance in RE5 and 6 was borderline cartoonish. If Capcom plans to give the Resident Evil series a more grounded feel going forwards, they can’t have one of their principal characters running around looking like a partially melted GI Joe action figure.

As for the Umbrella logo, it’s here that we dive into wild speculation, as there really is nothing to go on other than the logo itself. Well, not quite nothing.
From the actions of the soldiers in the Umbrella helicopter, including Chris, we can make a few observations. The fact that you’re thrown a gun that can easily kill Eveline from the helicopter would seem to imply that this version of Umbrella must be in some respect a rival organization to The Company if they want her dead, and also that they’ve encountered things like her before. This is also backed up by the following radio communication you overhear just before entering the salt mines;

“…however we did find several encrypted messages from the Bakers’ son Lucas to an unknown third party.”

“You can probably guess who that was.”

We’ll later find out that the people on the radio are the personnel on the Umbrella chopper, and one would assume that the “unknown third party” is The Company.
The radio seemingly belongs to Lucas as it was left tuned to a military frequency, implying that this was how he was communicating with this third party. Since he didn’t die in RE7, I can only assume that he either has a part to play in future Resident Evil games, or that he’ll be the target in the upcoming, seemingly Chris-centric “Not A Hero” DLC. 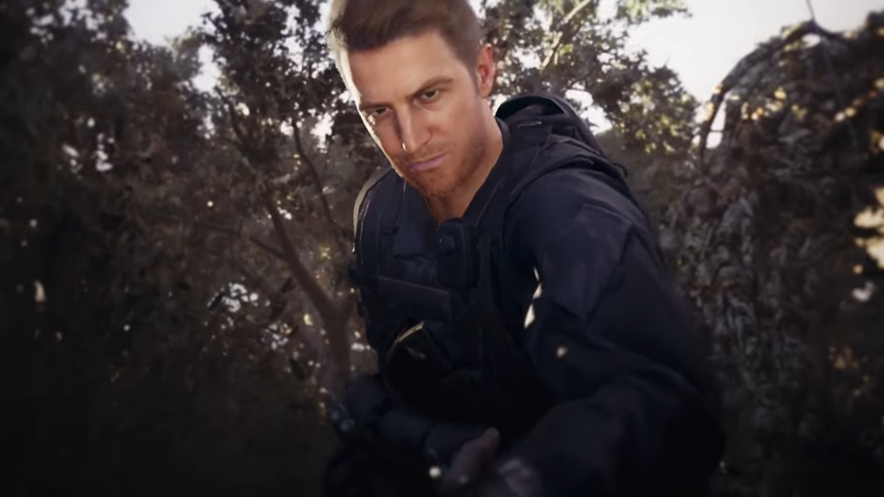 Additionally, when the helicopter touches down, neither Chris nor any of the soldiers that hop out immediately turn their guns on Ethan, something you’d expect someone working for the old Umbrella to do. To me, this says that whoever this new Umbrella is, they’re not an evil organization and are in fact hunting down any terrorists using Bio-Organic-Weapons, like the BSAA did in RE5 and 6.

If this is true, it could represent an interesting new direction for the series. One big problem that Resident Evil has always had is that for much of the series, especially recently, the Umbrella Corporation has operated more or less like GI Joe’s Cobra; an organization that was fully known to pretty much the whole world, but constantly loosed mutation-causing viruses and other various monstrosities upon the world with nobody even attempting to stop the outside of about a dozen people. For a series that tried to keep one foot rooted in reality at all times, that portrayal of Umbrella created far too many narrative problems.

Resident Evil 4 seemed to understand that, opening with a prologue that explained how the world came to its senses after the events of RE2 and strangled Umbrella in its sleep; but then RE5, 6 and both Revelations games attempted to either resurrect Umbrella in lieu of coming up with an original villain, or just created an Umbrella facsimile with all the same problems.

With this new Umbrella, it seems Capcom is trying to establish a narrative base from which to launch future Resident Evil stories. Umbrella might become similar in function to the SGC in the Stargate TV show, where each new game is a mission undertaken by the operatives of this new Umbrella. Now, the problem this potentially creates is putting us right back in the position of every Resident Evil character being a hyper-competent military badass, but I think that trap could be easily avoided with some creativity and effort.

The key to good horror is disempowerment. The protagonists of Resident Evil 1 through 4 were all combat-trained professionals of one kind or another, but the writers and developers always made sure to put them in a situation that was bigger and more dangerous than they were, usually cut off from any kind of help. If we are going to find ourselves playing as operatives of this new Umbrella in future RE games, Capcom needs to keep that philosophy in mind.
If all else fails, just have us play as another random schlub like Ethan, caught in the middle of a conflict between these two organizations, that could be interesting too.

One small, final thing; I kind of wish that if you didn’t pick up your hand after getting it chainsawed off at the start of the game, you would have had to go through the entirety of RE7 without it. It would have been a nice touch, even if pumping a shotgun would be a right pain in the ass.