To my mind, Super Mario Run successfully does what Pokémon Go failed to do, which is to say, Super Mario Run actually feels like a Mario game. It’s addictive, but not because of the skinner-box design that plagues many mobile games. Rather, Super Mario Run kept me coming back by being a well designed, intuitive and most importantly fun game that’s worth every penny of it’s asking price. 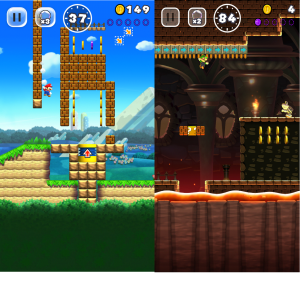 First things first, Super Mario Run is not an endless runner. It’s very much a traditional Mario game, but rather than shoehorning gamepad-style controls onto the iPhones’ touch screen, Nintendo made the game to work for the platform it’s on.
The best mobile games are those that make the unique interface of a smartphones touchscreen to control intuitively. Infinity Blade and Spider: Secret of Bryce Manor are two such games that could have had traditional console-style controls and would have been much worse for it. Instead, they’re two of the best games on the App Store.

In Super Mario Run, Mario runs to the right automatically and is controlled from a small space at the bottom of the screen that acts as a single large button. Tapping the button makes Mario jump, holding makes him jump higher. Tap it when Mario is against a wall and he’ll do a wall jump. Press the button in mid-air and Mario will do a spin that keeps him in the air a little longer. The developers have managed to map all of the basic Mario controls to a single button and it’s surprisingly functional and intuitive.

The levels of Super Mario Run look and feel exactly like those of any other 2D Mario game. All the Mario staples, including enemies, question blocks, mushrooms and red coin rings successfully make the transition to mobile and function exactly as they should.

Each level in the games’ six worlds only takes about two minutes to complete, but each level has a structured difficulty curve in the form of three sets of specially colored coins. These coins come in pink, purple and black and represent three tiers of difficulty. Once all five pink coins in a level have been collected, five purple coins appear and so on. The levels themselves don’t change, only the placement of the colored coins, but it provides a wicked challenge for hardcore Mario fans. 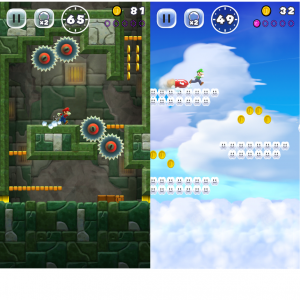 Apart from the main game or “Tour” is Toad Rally, a pseudo-multiplayer mode wherein players race against the ghosts of other players to collect the most coins and defeat the most enemies within a time limit. Entering a Toad Rally requires a Rally Ticket. These tickets are, refreshingly, not available via microtransactions and can instead be gained by progressing through Tour Mode or by playing one of a few minigames that be played one every few hours each.

In addition to coins, winning a Toad Rally also gives you a number of Toads of varying colors that tie into a kingdom-building system. As you reach certain thresholds of specific Toads, different buildings become available, including question blocks that dole out coins and Rally Tickets, houses that unlock different minigames and special houses that allow you to play as different characters in both of the game’s modes. It’s a great idea in theory, having Toad Rally and kingdom-building feed into each other, but what drags it down is the fact that the game actually subtracts Toads from your kingdom each time you lose. Worse, since a loss can take up to half the Toads you get from a win, depending on your personal skill level, progress in building your kingdom might not just go slowly, it can actually go backwards.
It can be incredibly frustrating, especially when I just want to frickin’ play as Luigi, to feel like I just forked over a Rally Ticket to lose resources. 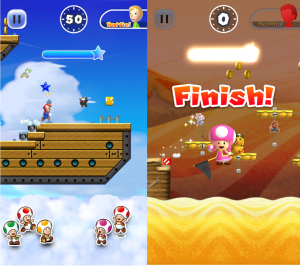 Another bewildering bit of design is that Super Mario Run requires a constant internet connection to play. Considering that Super Mario Run is predominantly a single player game and especially the fact that it’s a mobile game, there’s absolutely no reason for it. As someone who frequently brushes up against their data limit, I shouldn’t have to worry about my single player Mario game contributing to my usage. Several times, I’ve pulled out my iPhone with the intention of playing Super Mario Run only to realize I wasn’t near a Wi-Fi source and changed my mind. It’s likely that the always online requirement is there to combat leaderboard hackers and other kinds of cheaters, but let’s get one thing straight, that’s Nintendo’s’ problem, not anyone else’s’.

Super Mario Run is a “Free to Start” game, which means that you download what is essentially a demo for free, from which you can unlock the full version for a single, fixed price. It isn’t cheap ($13 Canadian at time of writing), even compared to some other higher-end iPhone games, but anyone who takes the plunge should find that they’ve gotten what they paid for.

Are there cheaper games with more content available for smartphones? Absolutely, but people need to be broken of the idea that mobile games shouldn’t cost more than one or two dollars, which I believe is slowly happening.

Selling a game for a dollar is all well and good, Angry Birds had huge success selling for a dollar, but Angry Birds was also incredibly simplistic, so much so that it wouldn’t really even have been a functional game if it was any simpler.
A game is typically priced based on two things, how much it costs to make and how many people it’s estimated will want to buy it. The aforementioned Infinity Blade, for example, simply could not have been made if it didn’t charge the six or so dollars that each game in that series did. Incidentally, if you want value for money, Infinity Blade 2 is where it’s at. I would gladly have paid twice what I did for that game if I could have tried it beforehand, which luckily, with Super Mario Run, you can do.

Super Mario Run is a fine addition to the App Store and particularly impressive considering this is only Nintendo’s second foray into the mobile game market. Like many Nintendo games, it’s easy to pick up and play, but has depth for players who want more out of it. While several mechanics surrounding Toad Rally are awkwardly implemented, it’s still fun and should keep players coming back to run races and build their kingdoms for quite a while. Though Mario will likely always be more at home on Nintendo’s own consoles, the quality job the developers have done making Super Mario Run feel like an authentic 2D Mario game cannot be understated.

After the disappointment of Pokémon Go, Super Mario Run sets the bar high for Nintendo’s mobile developers going forwards and I can’t help but be optimistic for Nintendo’s future mobile efforts despite myself.