I love the original Mirrors Edge. It had unique and intuitive freerunning gameplay, excellent visual design and a story that, while not extraordinary, was well-told and paced. It wasn’t perfect, the style of it’s cutscenes was pretty divisive and it’s combat was a little awkward, but those able to look past it’s flaws found an enjoyable game, most likely destined for a lot of “Hidden Gem” lists.
Many, including me had been hoping against hope that we would one day get a sequel. Now that we finally have, well……part of me wishes this gem had stayed hidden. 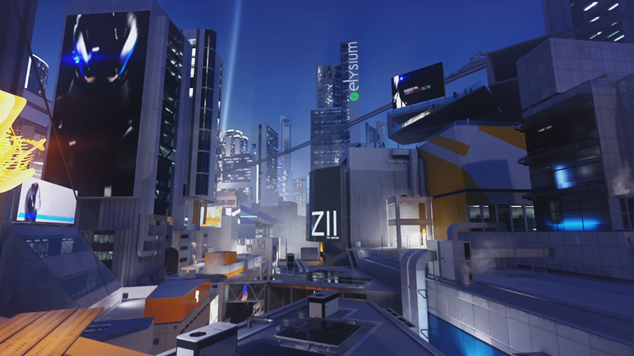 Mirrors Edge Catalyst is simultaneously a prequel and a reboot, though it seems strange that DICE felt the need to reboot the Mirrors Edge universe after a single game, as all it serves to do is negate the events of the original and de-age Faith a little. That might make sense if DICE’s plan was to tell a dramatically different story with reworked versions of characters from the first game, but apart from Faith, none of the original characters show up in Catalyst, so with some minor adjustments they easily could have made it a sequel.
I suspect that the only reason they didn’t simply call this game Mirrors Edge 2 was because Mirrors Edge was part of the previous console generation and because it didn’t sell particularly well.

The story begins with Faith being released from juvenile detention. I was informed by a loading screen later on that I could learn how she got there by reading the six-part comic Mirrors Edge Exordium (which, to save you a google search means “beginning”), something I have no intention of ever doing.
Destiny pulled this crap as well, cutting the story out of the game and sticking on a website that barely anyone will ever visit when most other games would just give you an in-game journal. Catalyst probably isn’t quite as bad as that, but half of the plot revolves around a mobster to whom Faith owes a debt of some kind and seems to be related to why she was in jail in the first place, but none of it is ever explained in game.
It’s a blatant grab at the wallets of Mirrors Edge fans and only serves to ensure that almost nobody ever sees it.

Another loading screen boasted that I can customize my Runner Tag on it’s website, something else almost nobody is ever going to do, especially when the game doesn’t seem particularly interested in telling you what a Runner Tag even is. 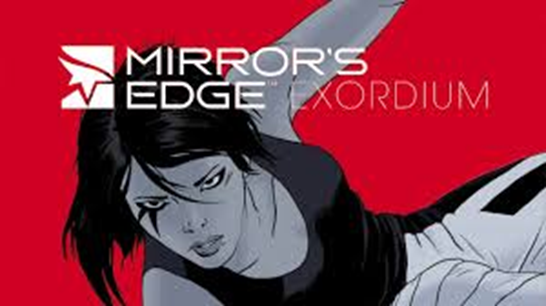 Unlike the original Mirrors Edge, Catalyst is an open-world game. I hesitate to call it a sandbox because outside of a handful of freerunning challenges, there really isn’t much to do besides gathering some incredibly token collectibles and knocking down the odd radio tower. Besides not being populated with anything too interesting, the shift to an open-world format actually ends up hurting the game in multiple ways.

Firstly, open worlds are not conducive to good storytelling. When you finish a mission and then spend an hour messing around in the overworld before the next one, you’ll tend to forget exactly what was happening and much of the nuance is lost.
Catalysts’ brand of gameplay isn’t served particularly well by an open world either. Levels in the original Mirrors Edge were built like courses that could be run quickly and efficiently once you’d learnt them. Catalyst tries to do the same, with a world made up of looping tracks that branch into other tracks, but it doesn’t always come together. Sometimes I’ll execute a masterful run to my destination, but just as often I’ll get cornered by one of the choppers that come as a result of one of the games’ side missions, as many of the paths lead to dead ends until you’ve unlocked all of the traversal abilities; that, or I’ll run straight off a building when a path ends without leading into another one.

Catalyst does add a navigational tool that causes a red, snake-like beam of light to dart along the ground, showing you the best route to your current objective.
In practice, however, I found that the red snake not only moves way too fast to keep up with, but also flat-out doesn’t work at times. In one instance it refused to activate during what was supposed to be a dramatic escape, leading to me wandering around like an idiot trying to figure out where the hell I was meant to go.

Ultimately, an open world is only as fun as what you can do in it. Eventually you’ll tire of the Pavlovian satisfaction you get from yanking bits out of computer terminals, doing relay races between other terminals and force-choking security cameras. I did like the “Gridnode” side-missions that unlock fast travel points, as they essentially function like challenge maps from the first game.
As fun as freerunning can be, sooner or later you’ll get bored and start fast-travelling everywhere.

See, the original Mirrors Edge pulled off the difficult trick of making it’s world feel big without actually being big. I can distinctly remember stopping many times in the original just to take in the sights. Small things like a flock of birds flying across the sky or the occasional car driving down the street made the world feel alive.
The world of Mirrors Edge Catalyst looks great, don’t get me wrong. I particularly like how civilians can be seen walking around inside buildings and on inaccessible rooftops. But Catalyst doesn’t do anything with it’s open world that it couldn’t have done with a sequence of linear missions, and it would have lead to a tighter, more focused game. 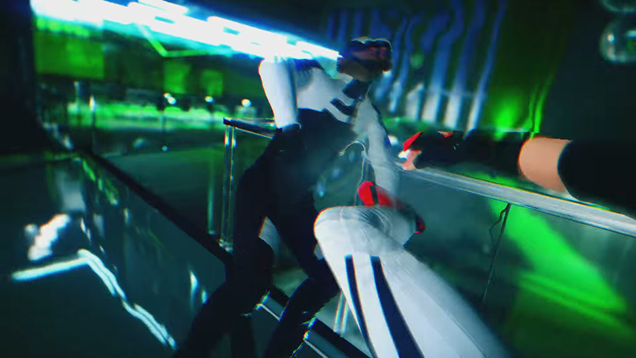 When you’re locked into Catalyst’s linear story missions, nearly all of it’s problems fall away and it becomes the game I’d hoped it would be. The platforming is top-notch, each level feels distinct and has the same obstacle course design as the original.
Sadly, wherever you are, gameplay is marred by the introduction of RPG elements. Mirrors Edge Catalyst has possibly the most token skill tree I’ve ever seen, requiring you to unlock what were basic abilities in the first game such as quick-turning and the ability to roll when you hit the ground.
One way gameplay has improved for the better is a system by which you can build a sort of shield by maintaining momentum. This encourages you not only to learn how to freerun more effectively, but also to avoid combat when you can, making use of terrain or a new low-damage knockdown move that lets you retain most of your speed.

Unfortunately, the story suffers immensely from having it’s beginning chopped off to be made into a comic. Imagine trying to read a book with the first few chapters missing, even if it’s the greatest story of all time, it’s rendered meaningless because it has no foundation and as a result, it won’t be memorable in the slightest.
Even now, mere hours after finishing the game, I’m having a great deal of difficulty remembering the finer points of Catalyst’s plot. None of the characters are given proper introductions and we don’t find out the main villains plan until more than halfway through the game.

On the same subject, it’s never explained why the government as a whole is evil, either. The original Mirrors Edge had this problem as well, never explaining exactly what Runners do besides “fight the power”, basically. There’s definitely room for an interesting story there, but neither game seems to feel like telling one.
Maybe the reason it’s never explained why the government is evil is because Faith doesn’t really have a reason; the game does take place entirely from her perspective.
What if Faith were to learn that she’s unwittingly become part of a domestic terror cell? She was, after all, taken in by Runners at a very young age after parents were killed by the police in a riot, giving her plenty of reasons to hate the government.
I’m just saying, before you ask us to smash the state, maybe you should establish why the state deserves to be smashed. 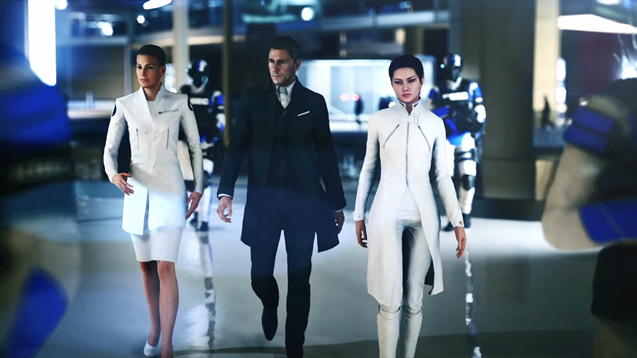 No spoilers here, but Mirrors Edge Catalyst ends with what I have started calling a One Timer, essentially a glorified cutscene in which you’re challenged to do a very specific set of actions, usually very quickly, in order to enact an action movie-style set piece. One Timers will sometimes have completely different controls from the rest of the game, but whatever the case, they are often fairly challenging, but also meant to be completed in a single attempt.
Uncharted 4, Call of Duty 4 and even the original Mirrors Edge, to name a few, all end with One Timers. The original Mirrors Edge did it right, making you run a quick obstacle course to reach the bad guy and kick him out of a helicopter. It was quick, awesome and, crucially, fairly easy.
The problem comes when a One Timer is hard enough that you have to attempt it several times, turning what’s supposed to be the big final action scene of the game into a annoying slog. Unfortunately, Catalyst falls into this category. I won’t spoil what it is, but suffice to say that the final scene lost much of it’s intended luster as I began thinking of the end-level replays in Super Meat Boy, envisioning a dozen or so Faiths slamming into the pavement one after another following the same failed jump.

At it’s core, Mirrors Edge Catalyst isn’t a bad game. In fact, when it gets out of it’s own damn way it becomes almost perfect. But unnecessary RPG elements hamper gameplay and the open world only serves to spread everything out and interferes with the pacing. And while glimpses of an interesting story do surface from time to time, withholding it until we buy the associated comic books only serves to make the story we do get half-baked and forgettable.

Fans of the original Mirrors Edge such as myself had been clamoring for a new game for ages. But Catalyst is a pale shadow of what could have been and, sadly, I find myself preferring to remember Mirrors Edge as it was. EA is clearly hoping to build a franchise from this point, but after this tragedy, well, let’s just say I don’t have much Faith.

6/10
+ Smooth, Fun Gameplay
– Required Reading To Understand The Plot
– Open-World Spreads Everything Too Thin
– Why Is The Government Evil Again?