Pokémon Sun and Moon frustrate me in a very unique way. Ever since the franchises’ second entry, Gold and Silver, the series has been allowed to aggressively, almost defiantly, stagnate; with each subsequent title contributing almost nothing of note aside from padding out the roster.

Yet, with Pokémon Sun and Moon, so many issues have been fixed in so many intuitive ways that, although I enjoyed myself for pretty much the entire time I played it, I found myself constantly annoyed that it took this long and this many perfunctory games for the series to improve. 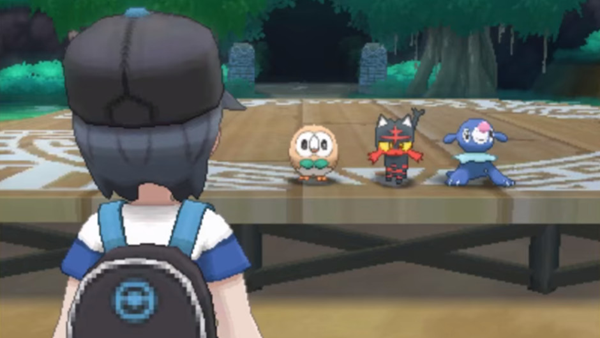 Pokémon Sun and Moon fix so many glaring issues that have plagued the series for years that I had to check online to make sure the franchise hadn’t switched developers.
For one, HMs are finally gone, replaced by Pokémon that you summon temporarily to navigate obstacles or perform specific actions. Need to cross a body of water? Just press a button at the waters edge and you’ll summon a Lapras to surf on. Some rocks in your way? No problem! Summon up a Tauros to smash them out of your way. It’s simple, intuitive, and it should have been done years ago.

Another smart change was reintroducing Pokémon from generation 1 with visual and mechanical changes. With about 100 new Pokémon added each generation, catching them all has become a less and less realistic goal for the common man. It’s nice then, to see the existing roster shaken up a little instead.
Rattata, for example, is now a Dark-type Pokémon. Vulpix is now a white, Ice-type fox while Exeggutor is now a taller, more palm tree-esque Grass/Dragon Pokémon.
While not everyone is likely to agree that each specific change is for the better, it’s refreshing to see Game Freak trying to shake up the roster rather than just padding it out.

Pokémon battles haven’t gotten much deeper in Sun and Moon, but a few intuitive changes make battles a little smoother. One such change is the ability to see an overview of your active Pokémon mid-battle, including stats they’ve gained or lost, as well as those of your opponents Pokémon. A little info button above each move showing it’s details, as well as how effective it will be against your current opponent is also immensely helpful.
New to Pokémon Sun and Moon are Z-Moves, super-powerful attacks that can be used a single time, with a single Pokémon, per battle. While cool and much easier to understand than the overly obtuse Mega Evolution system of X and Y, Z-Moves don’t really turn the tide of a battle if you’re already playing properly; which is to say, using whatever type the enemy is weak to. Personally, I ended up using Z-Moves primarily to swat wild Pokémon whenever I was on my way somewhere.

In previous Pokémon games, your character has always been someone who, until the game begins, had apparently never gotten around to leaving their house. Though they have always been fairly young, it never really made sense that they seemed to be exploring their world for the first time. In Pokémon Sun and Moon, you play a kid who has just arrived in the Alola region and is using this Pokémon related adventure to acquaint themselves with their new home. It’s not a huge change, but it removes an underlying sense of strangeness that, at least for me, the series has always had.
The Island Challenge that your character takes part in mixes up the concept of Pokémon gyms and instead has you undergoing “trials”, looping paths around each island that serve as a fusion of gyms and the wilderness that would have separated towns in previous games. At the end of each trial you’ll face a Totem Pokémon, essentially a boss fight with a superpowered Pokémon, before going on to face the island’s Kahuna, Sun and Moon’s gym leader equivalents.

One issue that the series has still not addressed is the fact that an increasingly large portion of its audience is around thirty years old and could do without many of the cutscenes and tutorials that seem to be designed with newborn babies in mind. I’m not saying they should be taken out, but an option to skip them or at least speed them up would be nice.

Another issue that could stand to be addressed is that many of the characters in the game, including your rival (though that term doesn’t seem quite appropriate anymore) are irritatingly saccharine. Not to get too off-topic, but it wouldn’t hurt to let kids know that not everyone wants to be your bestest friend in the whole wide world. Your rival in Pokémon Red and Blue, for instance, was competing with you to collect all the badges first and was more of an acquaintance than anything. For that matter, your rival in Gold and Silver straight-up hated you at first, eventually going through his own character arc over the course of the game to become less of a jerk.
Pokémon doesn’t need to be the next Killer7 and no one wants it to be. I’m perfectly aware that the majority of it’s fans are children, but the occasional nod to the more mature Pokémon audience would be nice. That said, an eyebrow raising, borderline-inappropriate joke involving the professor and an almost heartbreaking encounter in a cemetery early in the game show that the series is likely moving in the right direction.
Credit must also be given to Team Skull, the new Team Rocket equivalent, which is made up entirely of try-hardy, early 2000’s Nu-Metal types and is incidentally hilarious. 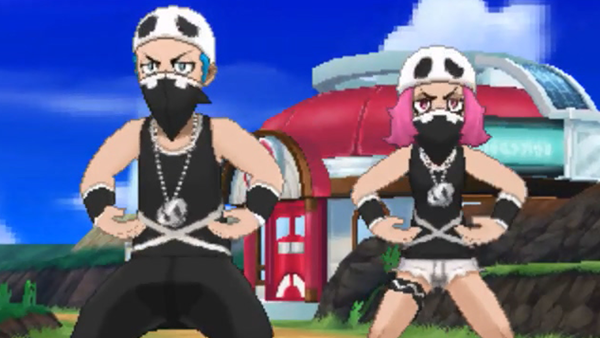 The games’ biggest misstep is, unexpectedly, in it’s Pokedex, which in Sun and Moon takes the form of a comedy talking robotic sidekick. The “Rotom Dex” is the worst video game robot since Borderlands’ Claptrap. It never misses an opportunity to make an unfunny quip, uses z’s in place of s’s when speaking and stares at you from the bottom screen for the entire duration of the game with a pair of eyes mounted on a huge frame that only serves to make the map about 50% smaller than it should be.

I don’t want to give off the impression that I’m marking down this game for the sins of it’s predecessors. So for the record, that isn’t the reason that Pokémon Sun and Moon doesn’t get a 10/10. Combat, while fun, always boils down to “Use whatever the enemy is weak to” and many of the characters and themes were a little too kiddy for me, even when I was a kid. These problems have been there since the series’ inception though and are unlikely to change anytime soon. Even so, with Pokémon Sun and Moon, the series has improved in almost every area.
Long-time Pokémon fans should be pleased with this better-than-average entry and even those like myself who have wearied of the franchise will find a lot to like, even if Pokémon Sun and Moon still bear the lowly stamp of their origin.

Also Try: Pokémon Gold/Silver, the best ones (come at me bro).