After 2 years of radio silence following it’s announcement, I stopped letting myself get too excited for Let It Die and mentally kept it in the same camp as Deep Down, another PS4 exclusive which, at time of writing, seems to be stuck somewhere around the seven or eighth level of development hell.
Hope surged again in my soul when we got a brief look at Let It Die at 2016’s PAX East, but details were scarce and it seemed the game might go underground again; until the Playstation Experience a few months later, where Let It Die was announced with an “…and it’s out, RIGHT NOW!”.
I couldn’t get home to play it fast enough, and what I found was a unique, solid experience that’s a little rough around the edges. 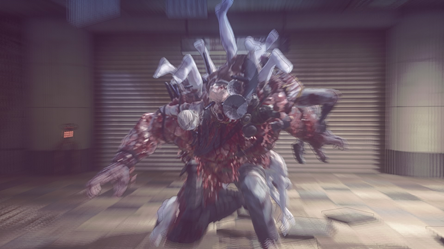 First impressions were bad. While downloading the game, I noticed that the game had 5 available add-ons and soon discovered that all of them were microtransactions for Death Metals, a kind of premium currency that can double as lives, varying in price from 7 to 133 dollars.
That said, when the actual game starts, you’re informed about the existence of microtransactions a single time, after which they stay completely out of your way. Death Metals can also be acquired just by playing the game, albeit slowly.

Let It Die is a free-to-play roguelike with gameplay similar to that of Dark Souls and takes place after the “Earth Rage” incident devastates the planet, which coincides with a massive tower rising out of the ground in Tokyo. The “Tower of Barbs” has claimed countless pilgrims, all attempting to reach the top, but none have yet succeeded.
Of course, that isn’t the real plot, that would be ridiculous. In reality you’re playing a video game in The Hated Arcade, presided over by a pro gamer, an apathetic teenage girl and of course, Death. The game, Death Drive 128, naturally runs off a vinyl record and is projected holographically by a screaming beetle. Much better. 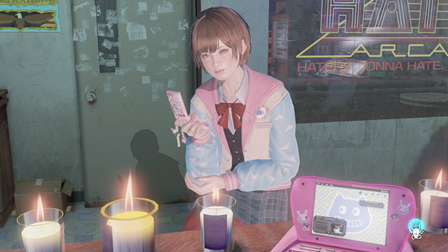 What intrigued me about Let It Die when I first heard about it is that you start the game with nothing. Literally. Upon killing your first enemy with your bare fists, you scavenge their weapon and even their clothes.
All weapons and clothing degrade with use and you’ll be constantly changing your equipment as you work your way up the tower. You gain weapons at a reasonable rate and after a point, you’ll have enough of an arsenal that you can simply ignore some weapons you find; but in my experience, clothing is a little too hard to come by. Since clothing is essentially armor, you typically have to go through it to kill enemies, which makes gathering clothing from fallen foes a rare occurrence. Moreover, clothing scavenged from enemies degrades far too quickly, often taking only two or three hits to destroy.

As an unapologetic fan of Dark Souls and almost any game like it, I never tired of the combat in Let It Die, though your mileage may vary. If you haven’t played a Souls game before, know that you’re on pretty much equal footing with most common enemies, at least right at the start, meaning every enemy is capable of killing you if you let your guard down at the wrong time.
Don’t think combat in Let It Die is just a straight rip-off of Dark Souls though. Several combat mechanics differentiate Let It Die from other games like it, one example being counter-attacks; hit an enemy right before they hit you and you’ll interrupt their attack and deal bonus damage. Finishing moves can also be performed on weakened enemies, with a unique animation for each weapon, and grant bonus experience while dispatching enemies in style.

What I did begin to tire of eventually was the tower itself. The main path up the tower doesn’t change, but each area along the tower’s many branching paths is procedurally generated; and all of it made up of the same generic, post-apocalyptic underground tunnels. The environments do begin to change eventually, after defeating the game’s third boss, but frankly, not everyone is going to get that far.

Hell, I almost didn’t get that far. 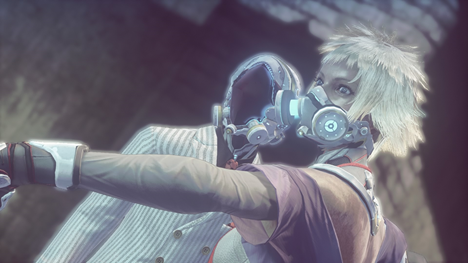 This is not an easy game. In some respects, it’s even harder than the Souls games that inspired it. In Dark Souls, death means losing your money, but dying in Let It Die means losing your entire character. That’s par for the course in most roguelikes, but in a game as long as this, having to train up a brand new fighter after losing one on the tenth level of the tower or above can seem daunting.

Luckily, dying doesn’t mean starting entirely from scratch. You might lose your items when you die, but any weapon skills you’ve developed, which grant bonus damage and even new, weapon-specific moves, persist across all of your characters. With that in mind, it’s a good idea to start leveling up your fists early on, as they also count as weapons. Weapons may degrade, but your fists will never leave you. 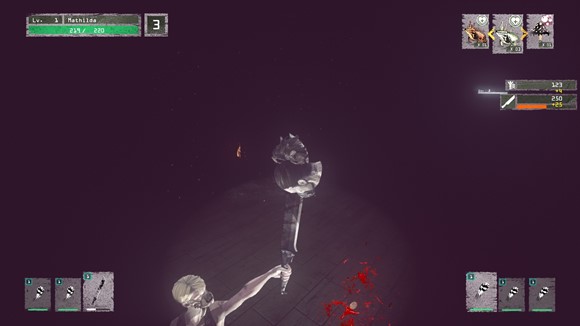 Like most roguelikes, any money and loot you gather is lost upon death, though anything you manage to bring back to your waiting room following a successful run can be safely stored there.
The waiting room is your hub area, where you can level up, change fighters, develop your base. You can also visit the Hated Arcade from the waiting room, where you can accept new quests, receive game tips and watch videos on the games lore.

The waiting room is home to several colorful characters, such as Kommodore Suzuki, a quartermaster who wears a graduation cap on top of a breathing apparatus and allows you to purchase and upgrade your weapons and equipment. You can unlock new items for sale by bringing him blueprints which are found throughout the tower.

There’s also the Mushroom Lady, who just about defies description; a bikini-clad, full-body tattooed woman with a set of fake bull horns in her mouth. The Mushroom Lady will sell you Decals, passive buffs that you can attach to your character. Most decals are lost upon death, but for a fairly exorbitant price, you can purchase her Mushroom Stew, which grants you a permanent, premium decal. 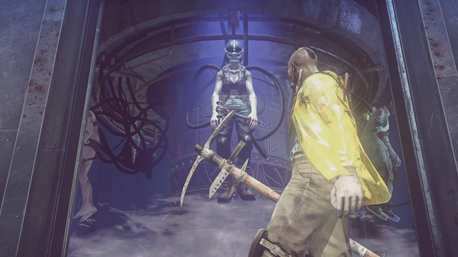 Let It Die requires a constant internet connection to facilitate it’s two multiplayer mechanics. The first is Tokyo Death Metro, a subway service run by a possibly haunted, animatronic serviceperson. Riding the metro allows you to invade and loot other players waiting rooms. The number of kill coins you get from a raid aren’t anything special unless you’re really strapped for cash, but it’s an excellent way to acquire SPlithium, a resource much harder to come by in the tower and used to upgrade your own waiting room.
Players can set their inactive fighters to help protect their waiting room from intruders. Trying to raid a fully manned waiting room can be brutally difficult. Sometimes though, defeating a defending fighter will put them into a downed state rather than killing them; when this happens, you will have the opportunity to capture that fighter, which will put them in a jail cell in your own waiting room and grant you a steady supply of SPlithium until they run out or are rescued.

The other side of the multiplayer aspect of Let It Die comes in the form of Haters. When you die in the tower, you leave behind a Hater, a copy of you equipped with all of the gear you died with. That Hater can then be encountered by other players as well as yourself. Haters are typically much more dangerous than regular enemies, as they have much better stats and equipment.
Defeating your own Hater puts that character back under your control. Alternatively, you can leave your Hater alone and if it kills a player in the future, you will be rewarded. 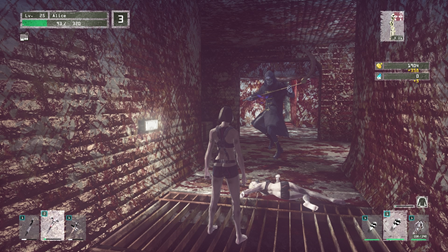 I can’t help but wonder if Let It Die would be a better game if it were a more traditional Souls-style game. Suda 51’s particular brand of crazy typically comes in more linear experiences like Killer7 or No More Heroes. This is coupled with the fact that, as with most good Free-To-Play games, I would have preferred to pay for it up front. Let It Die may be one of the better instances of games with Free-To-Play economies, but at the end of the day, a Free-To-Play model will always cripple a games economy, even if that game succeeds regardless.
And for the most part, Let It Die does succeed. It’s a solid adventure through a wonderfully surreal world that any fan of either roguelikes or Souls games owes it to themselves to try.

It is free after all.