The first Dishonored was a breath of fresh air, giving players a level of freedom within a well-crafted, linear story that we hadn’t seen since the original Bioshock. Dishonored 2 iterates on everything that made the first game great to create something truly remarkable. 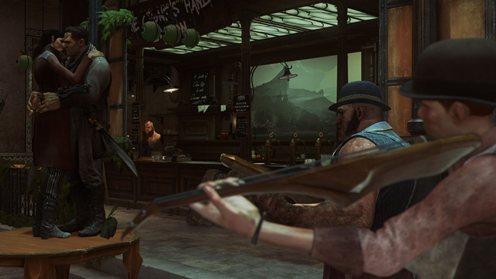 While writing a review to a sequel, I usually ask myself what problems the original had and try to determine whether or not the sequel addresses them, and it was here that I ran into the issue that the first Dishonored was damn-near perfect.
The biggest problem the original had was that Corvo was a silent protagonist, but also constantly interacted with many other characters in the story.
See, a silent protagonist works best when that character gets involved with the story as little as possible and functions essentially as a cameraman. Take the protagonist Bioshock for example, you’ll notice that while you have several interactions with the games characters, most of what they say to you boils down to either “Do this thing for me.” or “ARGH!, Curse you, protagonist!”. Bioshock almost never tries to characterize the protagonist and as a result it feels like you, the player, are the one exploring that sunken city.
With the original Dishonored, Arkane tried to have it both ways. They gave Corvo not only a backstory, but also several characters he knew from before the events of the game, as well as people who knew him by reputation. Unfortunately, Corvo never says a bloody word to pretty much any of them, exchanging maybe three lines of dialogue total with Emily, his primary charge throughout the game. It doesn’t help that almost every character in the game will inundate Corvo with their life’s story, as well as the rich history of the world at the slightest provocation, making Corvo out to be noticeably bland.

Dishonored 2 understands that the silent protagonist archetype doesn’t work when your character is an integral part of the story. This time around, both Corvo and Emily are fully voiced characters with their own personalities. The game also does away with the handful of token dialogue trees the first game had, giving each of the two leads their own moments of characterization.

Set 15 years after the original, Dishonored 2 sees Empress Emily Kaldwin’s reign usurped by a mysterious interloper. Forced to flee south to the city of Karnaca, you must unravel the conspiracy and take back what’s yours.

A far cry from the overcast gloom and oppressive architecture of Dunwall, Karnaca is a city of open spaces, bathed in sun. In lieu of whale oil, Karnaca relies largely on wind for power, requiring you to scale the occasional windmill to deactivate some security systems.
Karnaca is also home to bloodflies, swarming carnivorous insects that attack in endless waves until their nests are smashed or burned. Bloodflies take the place of Dishonored’s man-eating rats as a sort of level hazard, infesting some dark corners of the city. Unlike rats though, bloodflies hang around their nests exclusively, making them seem like avoidable traps rather than roving packs of land-piranha.

If Dishonored 2 lets itself down in one area, it’s in the narrative. The story itself is fine, if a little more basic than the original Dishonored, but the pacing is out of control at times. Empress Emily Kaldwin gets introduced and overthrown so fast that we don’t really get a sense of who she is or what she’s lost. A prologue showing what life was like before her usurpation might have helped ease us into the story and better serve the characters at the beginning, particularly a childhood friend of Emily’s, who gets maybe 15 seconds of total screen time before exiting the story. Players coming from the first game might not notice this as much, since they’re already familiar with many of the characters, but a game’s story shouldn’t require you to have gone through a previous game’s story to understand it.
There’s also a reveal towards the end which will be utterly meaningless to anyone who never played the first game’s DLC, and even then doesn’t really add anything to the story.
Unlike the first game, we aren’t allowed much time to get to know most of the games villains either. We spent time with the loyalists at the Hound Pits Pub between every mission in Dishonored and got to know them as the game progressed. In Dishonored 2, only two of the five major villains get much in the way of an introduction, after which the missions to take them out feel a little like going down a checklist. The exception being Kirin Jindosh, an eccentric inventor whose clockwork soldiers all speak with his voice, giving us a little insight into his character even when he isn’t actually there.
That said, every character is well written and acted during the time they do get in the game, and include solid performances by Rosario Dawson and Vincent D’Onofrio to name a few. 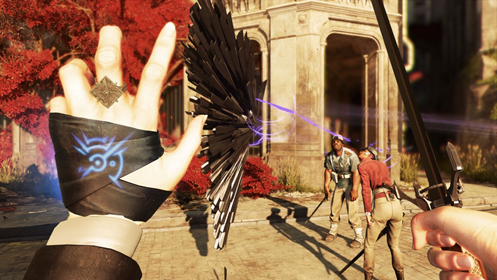 When the game starts, you choose whether to play as Corvo or Emily, after which you’ll go through the entire game as that character. Corvo and Emily have completely different powers, though they share passive abilities. Corvo’s powers are carried over from the first game, which is little disappointing, though the fact that each power now has a small skill tree helps to differentiate his powerset from Dishonored 1.
I was more excited to play as Emily, whose powers are completely different from Corvo’s. Emily can’t use Blink, Corvo’s short-range teleport, and instead has a power called Far Reach that pulls her towards surfaces with a kind of supernatural grappling hook. When upgraded, Far Reach can pull items and even enemies towards you. Snatching an important item from the desk of an unobservant guard or yanking my target from the safety of a secure room made me feel like a sort of steampunk Spiderman.
Another power, Domino, links enemies together so that what happens to one happens to all of them. Throw one linked enemy into a river, for example, and they all drown.

The moment-to-moment gameplay of Dishonored 2 really does just feels like more of the same and ultimately it is. But Dishonored 2 has many subtle improvements that make the gameplay smoother and give players a few more options. Perhaps the greatest change is the ability to knock enemies out in direct combat following a successful parry. Other smaller changes, such as the ability to peek up and over low cover and the ability to perform non-lethal drop attacks help the game feel like more than just an expansion. 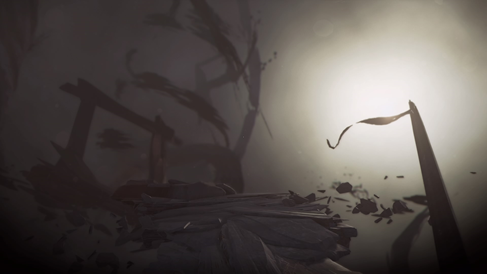 The first Dishonored was no slouch when it came to level design, but Dishonored 2 really kicks it up a notch with some truly inspired areas. The shapeshifting clockwork mansion from the games first trailer is a real standout and you could probably teach a class with how it serves gameplay without feeling gimmicky.
An asylum out at sea, a house unstuck in time and a turf war across multiple city blocks are just some of the fantastic places to explore in Dishonored 2 and each is a sprawling, multi-faceted area that feels real and lived-in despite it’s fantastical setting.
Another nice touch is the Dreadful Wale, your ship and base of operations which sits in the Karnaca’s harbor. Between missions you’re able to explore the ship, collecting notes and audio logs, and look out across Karnaca at all the places you’ll be able to visit.

After my first playthrough as Emily I immediately started the game again. This time I decided to play as Corvo in the games’ “No Powers” mode. Though fairly self-explanatory, this mode completely locks out both your powers and passive abilities, though you can still collect as equip Bone Charms which imbue you with passive buffs. I’ve played through Dishonored several times, but I wasn’t prepared for how much the moment-to-moment gameplay changes without Blink or even basic abilities like a high-jump.
Without powers, I had to rely more on gadgets than I had in any two playthroughs of Dishonored, and my playstyle was most reminiscent of Batman or, more accurately, Rorschach. An average enemy encounter might involve walking into a group of guards, shoving the first one into the group to scatter them before throwing a nearby whiskey tumbler into another guards face to put the group in disarray before letting the stabbings commence.
No Powers mode forced me to get acquainted with the ground levels of each area, since I couldn’t simply Blink up to a rooftop to stash unconscious bodies anymore. 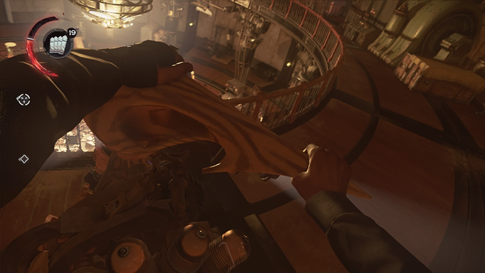 Dishonored 2 introduces the ability to craft Bone Charms, which worried me at first, as crafting systems in games frequently fall into the trap of being much more trouble than they’re worth. In games like Skyrim or The Witcher, I simply don’t have time for it.
I like to hold up The Last of Us as an example of crafting done right, with a few simple elements, each able to be made directly into an item. No elements that turn into elements that turn into elements that eventually become useful items. Luckily, Dishonored 2 is another good example, with only a single element, whalebone, and traits gained from sacrificing basic charms. It’s a simple system that works well and doesn’t get in the way of gameplay.

Stopping to smell most if not all of the roses, Dishonored 2 took me about 30 hours on my first playthrough. According to Arkane, you will only see 20% of the game’s content in a single playthrough, although that percentage probably varies greatly based on how thoroughly you explore each area.

Dishonored 2 doesn’t drastically mix up the formula that made the first game great, but subtle gameplay improvements and new mechanics relating to Powers and Bone Charms help the game feel like more than just more Dishonored. As much as I’ve enjoyed my time with them, part of me hopes that this is the last we see of Corvo and Emily, as sticking to the same characters forever would be mistake in a world as rich as this one.
Dishonored 2 stumbles in the storytelling department but surpasses the original in terms of gameplay. It perhaps occupies a similar position to Dark Souls 2, a position of not explicitly being better or worse than the original, just different, but a worthy sequel all the same and a great excuse to jump back into Arkane’s lovingly crafted world.