inFamous: Second Son left me with mixed feelings. On one hand it had arguably the best gameplay in the entire series so far and it’s unique and varied powersets were a joy to play around with. On the other hand the story, despite a strong performance from Troy Baker as main character Delsin, was dragged down by a meaningless morality system, the game’s main villain was criminally underwritten and the story featured one of the most poorly conceived characters I’ve ever seen; Eugene, an unironically disgusting caricature of a gamer, in a video game.

inFamous: First Light opens on a high note, firstly by not having Eugene in it, but also by stripping out the series’ moral choice system. Moral choice in the inFamous series always felt token, hollow and actually gave it’s characters less personality instead of more. With the morality system gone and protagonist Fetch permitted to have a consistent personality, I found I enjoyed the story and characters more than in inFamous: Second Son. It occurred to me while playing First Light that if Second Son had allowed you to play as Delsin and Fetch separately, with a single power set each, it might have been a much better game. But a reviewer must review what’s in front of them and First Light is at least as good as Second Son, if not better. 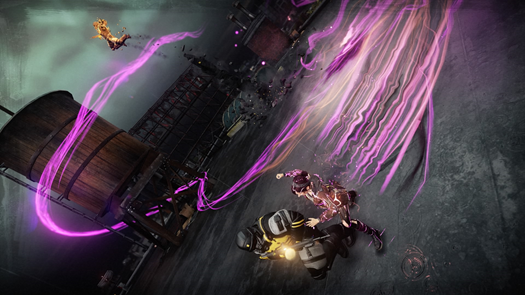 The main game in which you run around Seattle as Fetch, is actually a flashback, recounted by her while being interrogated by Augustine in Curdan Cay. First Light tells the story of how Fetch first came to Seattle with her brother and the events leading up to her capture before her appearance in Second Son.

It cannot be overstated how much the removal of the series moral choice system improves the story. Fetch makes good and bad decisions, informed by her personality and the people around her; and the supporting characters react realistically to those choices. That may sound like a very basic thing to be praising, but it’s something that neither Cole and Delsin almost ever did.

If you’ve played inFamous: Second Son, you already know what to expect with First Light. If you haven’t, you can expect a superhero sandbox game with great visuals, awesome characters and smooth, satisfying gameplay. Fetch is basically the inFamous series’ version of The Flash, and like The Flash, speed is the name of the game. Fetch can run up buildings in an instant, keep pace with Seattle’s monorail and leaves behind a trail of light wherever she goes.

Fetch’s powers are based on neon, which sounds cool and looks even cooler. Combat frequently becomes a beautiful, deadly lightshow as you launch clusters of neon homing missiles, create stasis bubbles and restrain enemies with rings of whitish-pink light. Your neon power is fueled by draining the many neon signs across Seattle, as well as the city’s anomalous amount of under-lit cars.

While the gameplay is a awesome as ever, the visuals in First Light suffer a little. Technically, the graphics haven’t changed from Second Son, but the version of Seattle in First Light is saturated with overcast or otherwise drab weather. Even when the sun is out, the city seems enveloped in a light haze. On one hand, it definitely makes neon light stand out more, but I would have appreciated some weather that wasn’t so oppressive. 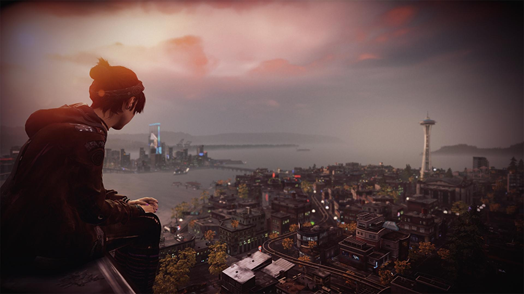 At any time, you can quit roaming Seattle and play in Curdan Cay instead. Gameplay in Curdan Cay takes the form of a series of challenge maps wherein you either rescue as many civilian targets as you can or fight enemies in a wave-based survival mode. The challenges come in three tiers of difficulty and force you to really open up with Fetch’s powerset, a more extensive version of the neon power you played with as Delsin in Second Son; especially if you’re hoping to platinum the game. You can also play as Delsin in Curdan Cay and take on the games challenge missions using his smoke, video and concrete powers.

Unfortunately, the missions inside Curdan Cay are pretty much the only time you’ll  run into any significant opposition. If you’ve played inFamous: Second Son, there isn’t a single enemy in First Light’s story missions you won’t be ready for. Not that every  game needs to be Dark Souls, but I came away a little disappointed that the main game never threw anything at me that came even close to slowing me down. 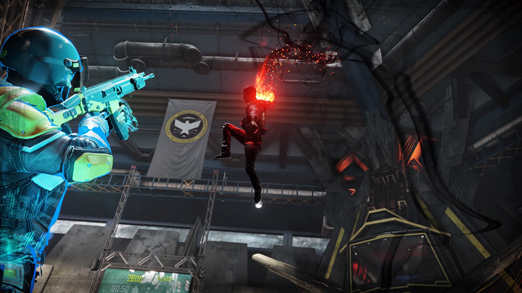 I can’t definitively say that First Light is my favorite inFamous game, inFamous 2 may still eke out a recommendation over it simply for being longer and having more characters. But inFamous: First Light is an exemplary entry in a series of already great games and is well worth the time of both existing fans of the series and newcomers alike.