Some games can be enjoyable despite being objectively bad. Though Kane & Lynch 2 was critically and commercially panned, I found the camcorder presentation and knock-down, drag-out feel of the gunfights compelling enough to not only see it through to the end, but earn 100% of it’s achievements.
Sometimes though, a game’s good qualities are so heavily outweighed by it’s problems that it becomes impossible to justify, which sadly is the case with Here They Lie. 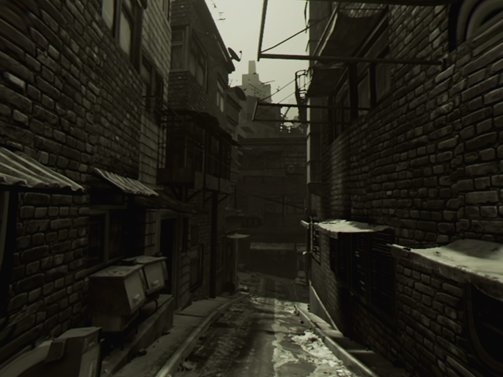 Upon starting the game, as well as every subsequent time you enter it, a woman’s voice recites a nursery rhyme, “Tick, tock, twelve o’clock, time to go to bed.”. You may think, like I did, that this dialogue might start to have some relevance as you progress through the game, but in the first of a great many instances of such, it never does.
With no further explanation, you’re deposited in a train station of what’s implied to have once been a normal city that seems to have mutated into a surreal labyrinth of architecture. Following the trail of a mysterious woman in yellow, you descend deeper and deeper into the city in an attempt to unravel the mystery of what happened here.

It’s here that the game runs into it’s first problem. Here They Lie never explains who the player is, where they are or what they’re supposed to be doing in any meaningful way. Even in a mystery, at least one of those things need to be established. There’s only so long that you can string a player along with absolutely no information before he or she simply loses interest.

Take Silent Hill 2 for instance. It’s established right at the start that you’re James Sunderland and you’re in Silent Hill to find your wife. No matter how crazy things get from there, you can always cling to that goal. The two Amnesia games might be even better examples, both games begin with an instruction to find someone and mostly leave you to your own devices from there, leaving collectible notes and the players own imagination to fill in the blanks.

Here They Lie is littered with notes as well, but where notes in most games either help piece together the story or tell us something about the world we’re in, the notes in Here They Lie seem to exist for the sole purpose of freaking us out with a paragraph or so of creepy text each. Colored photographs and the occasional ringing telephone can also be found that both function as audio logs and each has a meandering, rambling quality to it, reminiscent of how real people actually talk, that I quite like.

To the games credit, the content of the notes, photographs and one-way phone conversations is for the most part well-written and unnerving, the problem is that there isn’t really a point to any of it. Collectible notes don’t necessarily have to tell a story, it can be enough to have one-off characters expound on their own issues if they stay in keeping with the themes of the overall story. But Here They Lie doesn’t seem to have an overall story and as such, none of it has any lasting impact or meaning, though there is a neat little twist towards the end about who’s on the other end of the telephone. 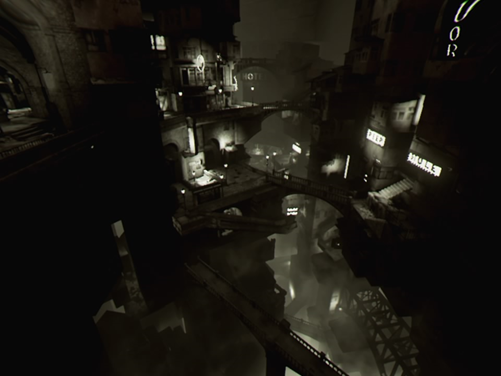 I was drawn in by Here They Lie’s visuals even before I played it. In spite of all of the game’s problems, it cannot be denied that the developers did an excellent job of creating a fascinating world to explore.
The city starts out fairly normal as you go from the train station through houses and city streets. But the further you go, the more the architecture starts to twist and turn, with hallways that incline until they’re going straight up or down and great chasms that separate sections of the city, connected by crisscrossing bridges. All the while you’ll be heading ever downwards into what feels like the center of the earth, until you lose sight of the tops of buildings and the city seems to swallow you. Though lacking any music to speak of, Here They Lie makes good use sound design in tandem with the visuals to create an oppressive horror environment.

The world of Here They Lie is mostly black and white, save for red blood and the mysterious woman’s yellow dress. Other colored objects do show up from time to time, such as a handful of neon signs in one section of the game, though it would have been nice to see splashes of color a little more often, as they usually contrast nicely with the visuals when they do appear. On a few occasions, you’ll wander into entire areas saturated completely in one or more colors, providing a kind of palate cleanser as well as a bit of a shock to the senses after all the black and white. 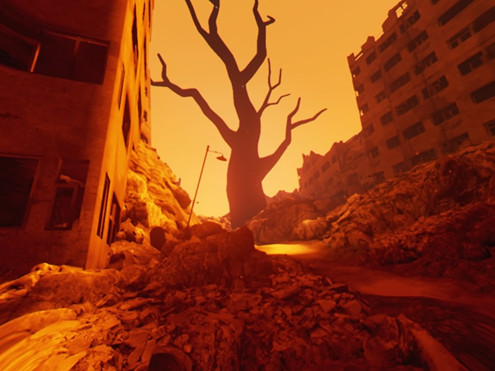 Is Here They Lie a walking simulator? Pretty much, yeah, though that term is extremely reductive. Gone Home, Dear Esther and The Music Machine are all walking simulators to a precisely equal degree but don’t attract much derision for it. A term used almost exclusively to condemn a game that applies equally to other great games isn’t worth much as a criticism, not without valid arguments to back it up at least.

If anything, Here They Lie could stand to be more of a walking simulator at times. For me the game is at it’s best when you’re left to explore it’s surreal environment and there isn’t anything trying to kill you at all.

When enemies do show up, it seem almost obligatory. Like SOMA, it feels like the developers threw in token enemy encounters simply because “Well, it’s a first-person horror game, we’ve got to have monsters wandering around that you have to sneak past because you can’t defend yourself!”.

It’s just as well that you can’t really defend yourself, because many enemies don’t seem very interested in killing you. Most of them mainly seem to want you to stay away from them, screaming if you get too close and giving you an encouraging whack to ward you off.
Enemies in Here They Lie feel like animatronics in a haunted house. They’re completely deaf and can’t see the beam of your flashlight. The only way they’ll detect you is if you get in their way as they patrol along a set route; and even then you’ll be fine most of the time if you just walk briskly away like you just ran into someone you don’t like at the mall. 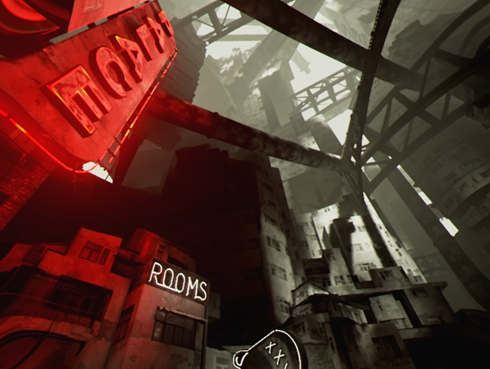 To it’s credit, Here They Lie never leans on VR to be an effective horror game. In fact, VR holds the game back in some ways.
Firstly, to combat motion sickness, Here They Lie uses what I’m going to call a “black bag” turning system. Rather than turning, moving the right stick left or right makes the screen go black for an instant and rotates your character about 45 degrees.
If nothing else, a quick-turn button wouldn’t have gone amiss, as having to turn in increments gets tedious after awhile.

For those of us who don’t get motion sick, it would have been better to simply have an option to disable the black bag and let us turn with the right stick. From what I hear, this game makes a lot of people sick anyways.
Instead, Here They Lie includes an optional feature called VR Drive Mode which causes your character to slowly turn in the direction you’re looking when walking forwards. You can finagle a sort of turn function by leaving VR Drive Mode on and maximizing the turn sensitivity, but even then your character doesn’t turn very fast and so trying to turn entirely with VR Drive Mode means craning your neck all the way to one side or the other; which gets painful after a while.
Other, smaller VR-related problems pop up from time to time as well, such as when you can put your head through some walls and objects. Occasionally your flashlight will come up pointed at weird angles when turned on, sometimes embedded in your characters hand.
Very little would be lost playing the game on a TV with a good pair of headphones, and while VR helps make certain moments more effective, it ultimately doesn’t do anything that couldn’t be done on other platforms.
With these things in mind, I wouldn’t be surprised to see a director’s cut of sorts that can be played without PSVR somewhere down the line.

I spent the 8 or so hours it takes to finish Here They Lie bending over backwards trying to like it. It’s got a lot of things I want from a horror game; interesting visuals, good sound design, even the go-nowhere audio logs were entertaining while I was listening to them. But the game ultimately lets itself down in too many areas to recommend.
If you must try it, I urge you to wait for a sale, like I did.

Try Instead: SOMA, Amnesia: A Machine For Pigs, The Music Machine