“Do A Barrel Roll”

I have a personal policy of not buying any gaming hardware until I can go hands-on with it first. It’s imperative for me to make sure that a console feel comfortable and intuitive to use before I slap down my hard-earned cash for it. That policy went double for PlayStation VR. I’ve used the Oculus Rift a small handful of times without any problems, but PlayStation VR seemed to be making about half of the people covering the thing queasy with at least some of it’s games.

After locating a demo booth, where a beautiful Filipino girl (not included) fitted me with the headset, I found myself in the cockpit of a futuristic fighter jet where a computerized voice went through a pre-flight checklist before launching me like a missile into the vacuum of space.
And there I was, drifting through the firmament, building-sized ships surrounding me as I was instructed to link up with a squadron of fighters flying towards the front of the fleet.

It was from about this point that I would have a big stupid grin on my face for the entire remainder of the demo. 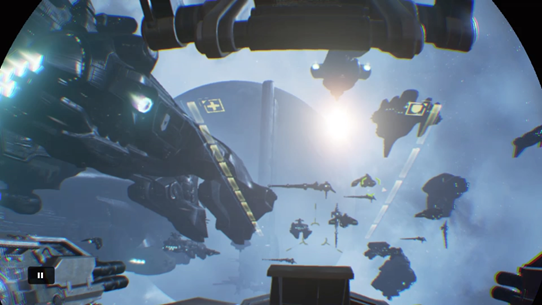 Nearing the front of the fleet with my squad, my earpiece was inundated with frantic radio chatter moments before another entire fleet as large as my own warped in right in front of me and released several squadrons of enemy fighters. I immediately broke off and engaged them, opening up with my fighters Gatling gun and missiles that I would later figure out could be locked onto enemies I was looking at regardless of which way my ship was facing. It was, I say as a child of the nineties, a total blast.
At the end of the skirmish, another, somehow even larger enemy ship warped in and decimated one of my fleets’ frigates with a gigantic laser beam as the demo ended.

I chose to recount my experience with the demo in full partly because it was my first experience with PlayStation VR, but also because the segment of gameplay in the demo also serves as the first level of Eve Valkyries’ single-player campaign.
In the campaign, your are a recently deceased pilot whose transference to a new, cloned body was disrupted. Eve Online, Eve Valkyrie and the late Dust 514 all use clones, between which your consciousness is transferred, to explain how respawning works. Now you must relive several memories of your time as a mercenary in order to properly recover the data. It does the job as a device to drive the story, I only wish they had done more with it.
Apart from sharing some of the same characters, the solo missions have absolutely no connection to each other. The missions are so short and easy that they don’t do a very good job of preparing you for the multiplayer, the one thing that the solo mode of a multiplayer-focused game can usually fall back on. There is a wave-based survival mode which, if nothing else, is good for practicing with newly unlocked ships without getting nuked in the multiplayer, but ultimately I came away disappointed with Eve Valkyries’ solo offering. 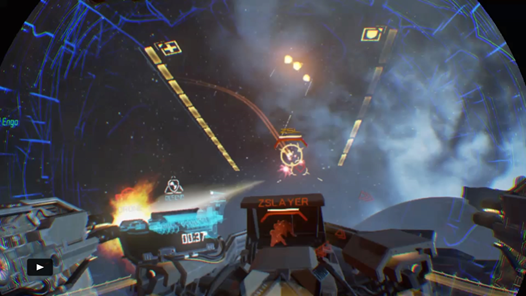 The multiplayer is where Eve Valkyrie really comes to life, and more than makes up for the deficiencies of the campaign. Dropping into the multiplayer, you’ll cycle between team-deathmatch and two different territory-control modes. The main attraction, though, is Carrier Assault. In Carrier Assault, each team must disable the shields of the other teams Carrier, revealing multiple nodes that must be destroyed to open up a final weak point and destroy the ship.
Working together to disable the enemy carrier provides a great sense of accomplishment, especially when you’re the one to destroy the ships reactor. You have to fly inside of the carrier to get to the reactor, which feels like a miniature Death Star trench run every time.

There are three ship classes with about a dozen ships each. The Fighter, though fragile, is nimble and capable of firing homing missiles. The Support can repair allies and disable enemy shields. The Heavy commands tremendous firepower and can use a micro-warp drive to zip across the battlefield.
Each ship is balanced and useful in it’s own way. If you’re familiar with team-based games, you’ll likely be able to find a ship that suits your preferred role. More so than most recent multiplayer games, Eve Valkyrie requires players to work as a team to secure victory. You can ensure a decent win ratio simply by remembering to fight as a group, as having an enemy ship on your tail usually means death by yourself. 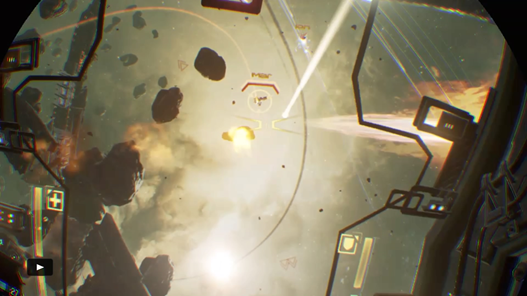 I would be remiss if I didn’t mention the inclusion of microtransactions in Eve Valkyrie. Currency and experience boosters can be purchased to unlock ships faster, most likely a holdover from the days that Eve Valkyrie was given out for free to people who pre-ordered an Oculus Rift. The progression isn’t so slow as to require boosters or extra currency to get anywhere, but considering that I paid 80 Canadian dollars for the game in the first place, their presence is galling.

Eve Valkyrie is a great example of how VR can be used to enhance a game without getting in the way of the fun. A disappointing solo mode and the presence of microtransactions keep the game from true greatness, but the solid gameplay, reinforced by the immersiveness of VR makes Eve Valkyrie a must-play for anyone whose stomach can handle it.