I didn’t own a PS3 until only a few months before the PS4 came out. I was perfectly happy with my Xbox 360 for most of the last generation. It wasn’t until I found a PS3 on sale and picked it up to play through the systems exclusives that I realized exactly what I’d been missing. The PS3’s library has a ton of great games in it, but inFamous 2’s stellar writing and deep, challenging superpowered gameplay really set it apart and it quickly became one of my favorite games of the generation.
inFamous: Second Son continues the series’ tradition of strong gameplay and characterization, but several issues keep it from realizing it’s full potential. 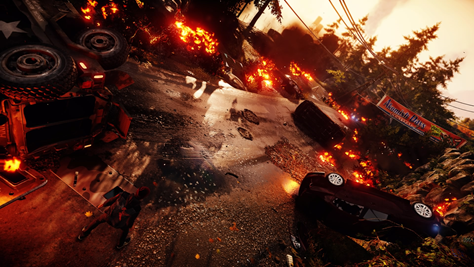 The story of Second Son takes place seven years after the events of inFamous 2, where Cole MacGrath sacrificed himself to cure humanity of a plague and destroy The Beast. Once thought extinct, Conduits have been relabeled Bio-terrorists and the D.U.P., a special branch of the government led by the iron-willed Augustine is tasked with hunting them down.
After Augustine tortures the populace of an Indian reservation for information about an escaped conduit, protagonist Delsin Rowe travels to Seattle to take on the D.U.P., confront Augustine and save his people.

As expected, the writing is top-notch and the way that different characters play off of each other is often more entertaining than the story itself. The interaction between the Delsin and his police officer brother Reggie, is especially well-executed and provides a solid core around which the other characters largely revolve.

The cast isn’t huge, but every actor puts in solid work, including memorable performances from Troy Baker, Travis Willingham and Laura Bailey. Unfortunately, several interesting characters have criminally little screen time and tend to disappear not long after being introduced; the worst instance of such being Fetch, a conduit and possibly the games most interesting character, as well as Augustine, the games main villain. Augustine is a competent and intimidating antagonist, ostensibly set up as a Magneto-level threat, but she only gets a small handful of short scenes and is never established as the menace she deserves be. Augustine does get some fleshing out eventually and what we learn turns her into a much more interesting and sympathetic character, but by that point it’s pretty much the end of the game.

Even so, the characters are all well written and acted during what time they do get, with the exception of Eugene, an utterly offensive caricature of a gamer who even gets picked on by Delsin at one point for playing too many video games. Considering that Second Son is in fact, a video game, it’s just bewildering and gross. 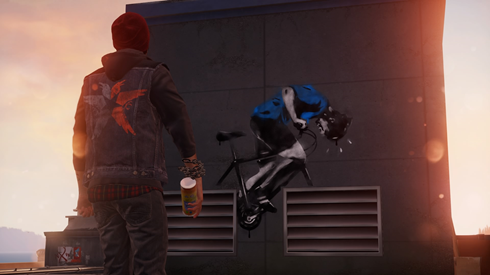 The biggest problem Second Son has is the one that every main entry in the inFamous series has as well, the moral choice system. Every once in a while, the story grinds to a halt so that Delsin can either help someone’s cat out of a tree or burn their house down, and the story threatens to completely fall apart.

This is the lesson that the Fable games died to teach us and some developers still haven’t figured it out. Look at Geralt from the Witcher games or Adam Jensen in Deus Ex: Human Revolution for choice in games done right. In Deus Ex, Adam can be a total jerk or the most polite, forthright human being in the world while still being the same professional, determined character who never asked for this.

In Second Son, it makes no sense that Delsin can either arrest drug pushers or set street musicians on fire. One properly written character cannot do both of those things. Compared to the other characters in the game with consistent personalities, it ironically makes Delsin seem to have no personality at all. 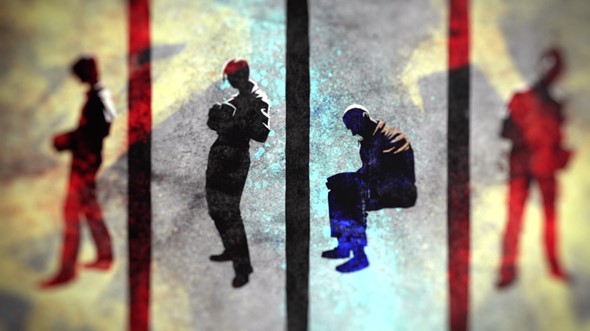 The gameplay of Second Son is as strong as you’ve come to expect from the inFamous series; I don’t think I’ve had this much fun just messing around with a game since the original Prototype.

Sucker Punch really went above and beyond in their recreation of Seattle and the results really have to be seen to be believed. Seattle is a beautiful city of vibrant colors and distinctive architecture, brought to life by excellent sound design, good use of NPC civilians and traffic, as well a truly stunning lighting engine.
Real landmarks, like the Pacific Science Center, Lincoln’s Toe Truck and the Elephant Car Wash have also been meticulously recreated by Sucker Punch to make this feel like a real place, and they absolutely nailed it. I’ve never been to Seattle in real life, but after playing Second Son, I feel like I have.

Second Son also includes an extensive suite of tools for taking photos, which makes it easy to take picture of cool moments in the game; as you can enter and exit it at a moments notice just by clicking in the right stick. I feel it deserves particular mention not only for the work Sucker Punch put into it, but also because it’s especially useful if, for example, you’re trying to get good screenshots for a review. 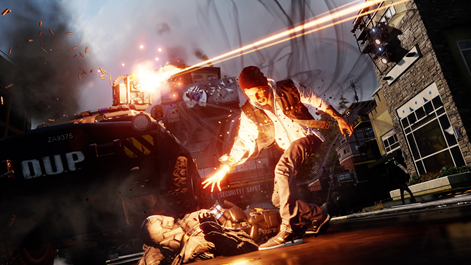 Delsin’s “power” is the ability to absorb the powers of other conduits, as he discovers when he accidentally absorbs his smoke power from a conduit early in the game before going on to absorb the powers of other conduits as the game progresses. Mechanically this works just fine, with each power offering it’s own gameplay benefits and recharging from different sources.
The games four powers are at least fun to play around with for a while and you’ll likely develop a favorite as you go, but having four different sets of powers means that none of them are as developed as they could be.

The moral choice system creeps in here as well and messes with Second Sons gameplay in a few subtle ways. In inFamous 2, Cole could gain a few abilities based on the powers of other conduits depending on the choices you made. In keeping the focus on a single power let Sucker Punch explore everything that could be done with it. Delsin gets every conduits power, but only half of the available upgrades for each, the other half locked behind whatever moral choices you didn’t make. Compared to Cole’s electricity power, Delsin’s powers each come off as shallow and underdeveloped. 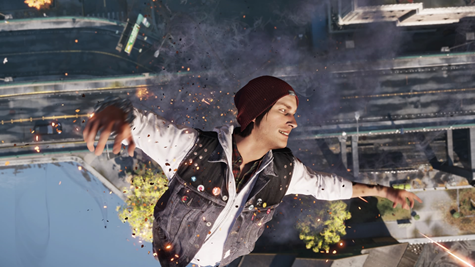 Despite all of it’s problems, inFamous: Second Son is a blast. Few games are this fun to simply run around in. The problems with the series’ moral choice system haven’t gone anywhere and occasionally threatens to destabilize the games otherwise enjoyable story, but the well-written characters and their interactions kept me engaged for the story’s duration.

The look and feel of the superpowered combat sets a new bar for not only the inFamous games, but for any future superhero game; but Second Son never makes the most of each power and I find myself wishing that Sucker Punch had taken the inFamous 2 route of focusing mainly on one power and dabbling in others depending on how you play. It would definitely make Delsin feel more like his own character for when he inevitably appears in PlayStation All-Stars 2. Right?